KYIV, Ukraine - Explosions were heard in the Ukrainian capital of Kyiv early Friday as Russian forces pressed on with a full-scale invasion that resulted in the deaths of more than 100 Ukrainians in the first full day of fighting and could eventually rewrite the global post-Cold War security order.

After using airstrikes on cities and military bases, Russian military units moved swiftly to take on Ukraine's seat of government and its largest city in what U.S. officials suspect is a brazen attempt by Russian President Vladimir Putin to dismantle the government and replace it with his own regime.

Ukrainian leaders pleaded for help as civilians piled into trains and cars to flee, and hotels in Kyiv were being evacuated amid early indications of an assault.

Ukrainian forces braced for more attacks after enduring for hours a Russian barrage of land- and sea-based missiles, an assault that one senior U.S. defense official described as the first salvo in a likely multi-phase invasion aimed at seizing key population centers and "decapitating" Ukraine's government. Already, Ukraine officials said they had lost control of the decommissioned Chernobyl nuclear power plant, scene of the world's worst nuclear disaster.

In unleashing the largest ground war in Europe since World War II, Putin ignored global condemnation and cascading new sanctions. With a chilling reference to his country’s nuclear arsenal, he threatened any country trying to interfere with "consequences you have never seen," as a once-hoped for diplomatic resolution now appeared impossible.

"Russia has embarked on a path of evil, but Ukraine is defending itself and won’t give up its freedom," Zelenskyy tweeted. His grasp on power increasingly tenuous, he pleaded Thursday for even more severe sanctions than the ones imposed by Western allies and ordered a full military mobilization that would last 90 days.

Zelenskyy said in a video address that 137 "heroes," including 10 military officers, had been killed and 316 people wounded. The dead included all border guards on the Zmiinyi Island in the Odesa region, which was taken over by Russians.

Plume of smoke rises from explosion in Ivano-Frankivsk, Ukraine

A plume of smoke rose from an explosion in Ivano-Frankivsk, Ukraine, on Feb. 24, 2022, amid reports of Russian attacks. Credit: Anna Shchesna via Storyful

He concluded an emotional speech by saying that "the fate of the country depends fully on our army, security forces, all of our defenders." He also said the country had heard from Moscow that "they want to talk about Ukraine’s neutral status."

U.S. President Joe Biden announced new sanctions against Russia, saying Putin "chose this war" and had exhibited a "sinister" view of the world in which nations take what they want by force. Other nations also announced sanctions, or said they would shortly.

"It was always about naked aggression, about Putin’s desire for empire by any means necessary — by bullying Russia’s neighbors through coercion and corruption, by changing borders by force, and, ultimately, by choosing a war without a cause," Biden said.

Blinken said in television interviews that he was convinced that Russia was intent on overthrowing the Ukrainian government, telling CBS that Putin wants to "reconstitute the Soviet empire." 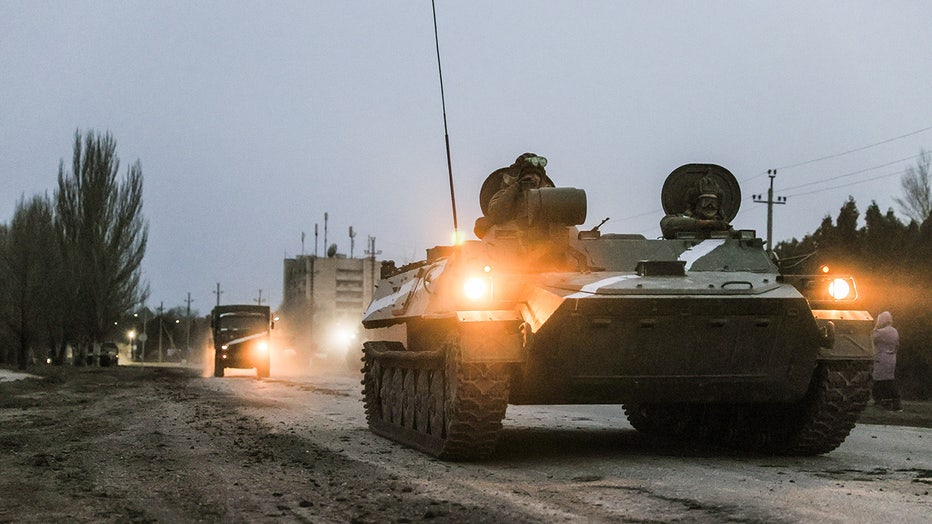 A military column approaches the Perekop checkpoint on the Ukrainian border. (Photo by Sergei MalgavkoTASS via Getty Images)

At times it felt almost cheerful. Families ate dinner. Children played. Adults chatted. People brought sleeping bags or dogs or crossword puzzles — anything to alleviate the waiting and the long night ahead.

But the exhaustion was clear on many faces. And the worries.

"Nobody believed that this war would start and that they would take Kyiv directly," said Anton Mironov, waiting out the night in one of the old Soviet metro stations. "I feel mostly fatigue. None of it feels real."

Residents of the Ukrainian capital began to flee Kyiv along congested highways on Feb. 24, 2022, following the start of announced Russian military operations in Ukraine. Credit: vidana_blonska via Storyful

The invasion began early Thursday with a series of missile strikes, many on key government and military installations, quickly followed by a three-pronged ground assault. Ukrainian and U.S. officials said Russian forces were attacking from the east toward Kharkiv, Ukraine's second-largest city; from the southern region of Crimea, which Russia annexed in 2014; and from Belarus to the north.

Zelenskyy, who had earlier cut diplomatic ties with Moscow and declared martial law, appealed to global leaders, saying that "if you don’t help us now, if you fail to offer a powerful assistance to Ukraine, tomorrow the war will knock on your door."

Though Biden said he had no plans to speak with Putin, the Russian leader did have what the Kremlin described as a "serious and frank exchange" with French President Emmanuel Macron.

Both sides claimed to have destroyed some of the other's aircraft and military hardware, though little of that could be confirmed. 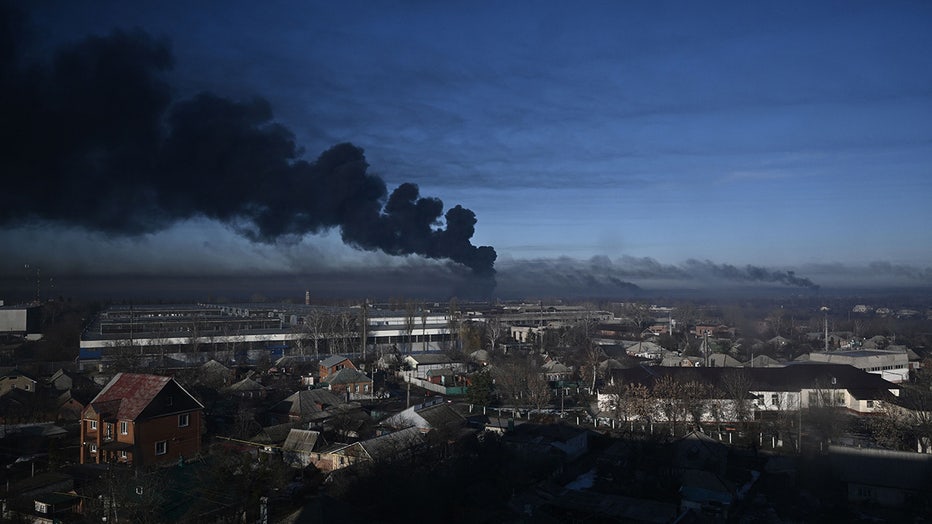 Black smoke rises from a military airport in Chuguyev near Kharkiv on February 24, 2022. (Photo by Aris Messinis / AFP) (Photo by ARIS MESSINIS/AFP via Getty Images)

The Vienna-based International Atomic Energy Agency said it was told by Ukraine of the takeover, adding that there had been "no casualties or destruction at the industrial site."

The 1986 disaster occurred when a nuclear reactor at the plant 130 kilometers (80 miles) north of Kyiv exploded, sending a radioactive cloud across Europe. The damaged reactor was later covered by a protective shell to prevent leaks.

Alyona Shevtsova, adviser to the commander of Ukraine’s ground forces, wrote on Facebook that staff members at the Chernobyl plant had been "taken hostage." The White House said it was "outraged" by reports of the detentions.

U.K. Prime Minister Boris Johnson had some very harsh words for Russian President Vladimir Putin after he ordered an invasion of Ukraine overnight. Johnson said Putin will never be able to wash the Ukrainian blood from his hands and his ultimate goal is to "redraw the map of Europe in blood."

The Ukrainian Ministry of Defense issued an update saying that though the plant was "likely captured," the country's forces had halted Russia's advance toward Chernihiv and that it was unlikely that Russia had achieved its planned Day One military objectives.

The chief of the NATO alliance, Jens Stoltenberg, said the "brutal act of war" shattered peace in Europe, joining a chorus of world leaders decrying an attack that could cause massive casualties and topple Ukraine’s democratically elected government. The conflict shook global financial markets: Stocks plunged and oil prices soared amid concerns that heating bills and food prices would skyrocket. 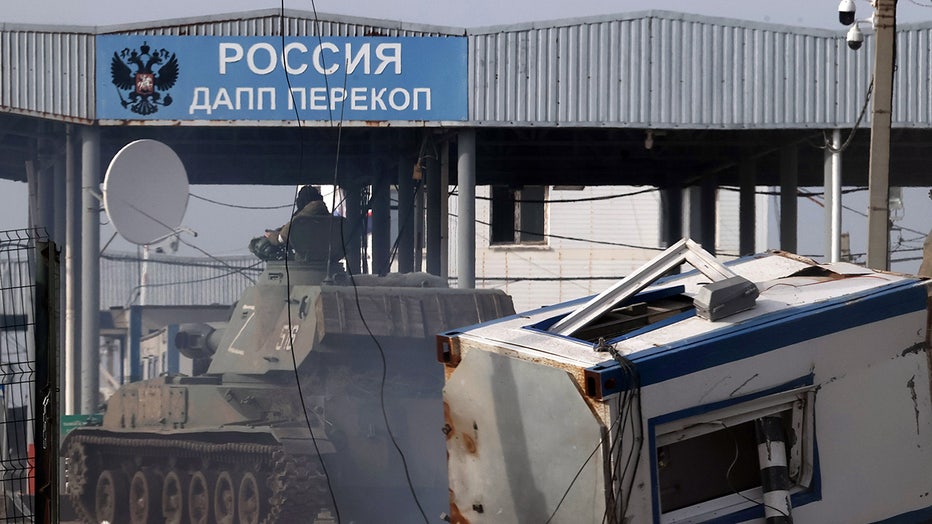 A security booth knocked over by a tank at the Perekop checkpoint on the Ukrainian border. (Photo by Sergei MalgavkoTASS via Getty Images)

Condemnation came not only from the U.S. and Europe, but from South Korea, Australia and beyond — and many governments readied new sanctions. Even friendly leaders like Hungary’s Viktor Orban sought to distance themselves from Putin.

British Prime Minister Boris Johnson said he aimed to cut off Russia from the U.K.’s financial markets as he announced sanctions, freezing the assets of all large Russian banks and planning to bar Russian companies and the Kremlin from raising money on British markets.

"Now we see him for what he is — a bloodstained aggressor who believes in imperial conquest," Johnson said of Putin.

Zelenskyy urged the U.S. and West to go further and cut the Russians from the SWIFT system, a key financial network that connects thousands of banks around the world. The White House has been reluctant to immediately cut Russia from SWIFT, worried it could cause enormous economic problems in Europe and elsewhere in the West.

While some nervous Europeans speculated about a possible new world war, the U.S. and its NATO partners have shown no indication they would send troops into Ukraine, fearing a larger conflict. NATO reinforced its members in Eastern Europe as a precaution, and Biden said the U.S. was deploying additional forces to Germany to bolster NATO.

After weeks of denying plans to invade, Putin launched the operation on a country the size of Texas that has increasingly tilted toward the democratic West and away from Moscow’s sway. The autocratic leader made clear earlier this week that he sees no reason for Ukraine to exist, raising fears of possible broader conflict in the vast space that the Soviet Union once ruled. Putin denied plans to occupy Ukraine, but his ultimate goals remain hazy.

Ukrainians were urged to shelter in place and not to panic.

"Until the very last moment, I didn’t believe it would happen. I just pushed away these thoughts," said a terrified Anna Dovnya in Kyiv, watching soldiers and police remove shrapnel from an exploded shell. "We have lost all faith."

With social media amplifying a torrent of military claims and counter-claims, it was difficult to determine exactly what was happening on the ground.

Russia and Ukraine made competing claims about damage they had inflicted. Russia’s Defense Ministry said it had destroyed scores of Ukrainian air bases, military facilities and drones. It confirmed the loss of one of its Su-25 attack jets, blaming "pilot error," and said an An-26 transport plane had crashed because of technical failure, killing the entire crew. It did not say how many were aboard.

Russia said it was not targeting cities, but journalists saw destruction in many civilian areas.

Poland’s military increased its readiness level, and Lithuania and Moldova moved toward doing the same.

Putin justified his actions in an overnight televised address, asserting the attack was needed to protect civilians in eastern Ukraine — a false claim the U.S. predicted he would make as a pretext for invasion. He accused the U.S. and its allies of ignoring Russia’s demands to prevent Ukraine from joining NATO and for security guarantees, saying the military action was a "forced measure."

Anticipating international condemnation and countermeasures, Putin issued a stark warning to other countries not to meddle.

In a reminder of Russia’s nuclear power, he warned that "no one should have any doubts that a direct attack on our country will lead to the destruction and horrible consequences for any potential aggressor."