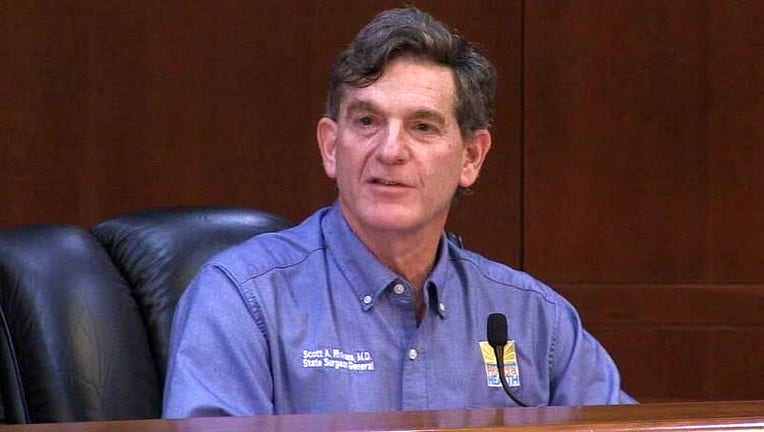 TALLAHASSEE, Fla. - Florida needs a new state surgeon general. The question could quickly become: Will it be easy to find someone?

Scott Rivkees announced he will leave his post as surgeon general and secretary of the Florida Department of Health next month. But the move comes amid a surge of COVID-19 cases and deaths. Combine that with Gov. Ron DeSantis’ antagonism to federal health authorities and mask mandates, and it might make it difficult to find a replacement.

"We are in a situation right now where it’s like a trauma center for public health. We are in the middle of a major pandemic in a mega-state. I would hope we could find a very highly trained, particularly public health physician who has good credentials in infectious diseases who would take that position right away," said James Howell, a physician who headed the Department of Health for three years in the late 1990s. "Whoever takes that position works for the governor. They would have to have a working relationship. But it’s going to be a real challenge. That’s all I can say."

Florida has been a hotbed for COVID-19 in recent weeks as the highly transmissible delta variant of the coronavirus has spread. As an example, the state reported 21,183 new COVID-19 cases on Wednesday, according to data posted online by the federal Centers for Disease Control and Prevention.

Rivkees issued a statement Friday thanking DeSantis for the opportunity to serve as the state’s top public-health official and thanked public-health professionals who have remained on the front lines for more than 500 days during the pandemic.

"Your tireless work and dedication has saved countless lives," Rivkees said in the statement. "I am humbled and proud to have been part of your team."

Rivkees, who was chairman of the University of Florida College of Medicine’s Department of Pediatrics and physician-in-chief at UF Health Shands Children’s Hospital, was named surgeon general in spring 2019, a few months after DeSantis took office. He is an expert in pediatric endocrinology and developmental biology who joined UF Health from Yale University in 2012.

Lt. Gov Jeanette Nunez helped negotiate an agreement that allowed Rivkees to remain a tenured professor of pediatrics at the university and continue full-time employment. Under terms of the five-page agreement, Rivkees was assigned to work as the Department of Health secretary, a position that doubles as surgeon general.

Under the agreement, the state paid the university $140,000 a year in four quarterly installments of $35,000. The contract was allowable under a law dealing with the intergovernmental transfer of public employees between agencies.

But with positions appointed by the governor, such as the Department of Health secretary, the law limits the length of such intergovernmental transfers to two years, with up to a three-month extension allowed. Rivkees’ resignation was first reported Thursday by Florida Politics.

"We thank Dr. Rivkees for his meaningful work during the most challenging pandemic of our lifetime," DeSantis spokeswoman Taryn Fenske said in a statement. "We appreciate his service to the people of Florida and wish him the best in his future."

Before hiring Rivkees, DeSantis considered several candidates but struggled to find a doctor to run the Department of Health, in part because of DeSantis’ support for allowing smokable medical marijuana.

Shortly after taking office, DeSantis pushed the Legislature to pass a bill that allowed smokable marijuana, eliminating a ban lawmakers had put in place in 2017. The stance put DeSantis at odds with medical groups that maintain smoking can never be good for your health.

Rivkees also faced controversy after being named to the post, following a News Service of Florida report that he had been the subject of a university sexual harassment investigation and, separately, was found by a university auditor to have not properly filed financial disclosure information. Questions surrounding Rivkees prompted the Florida Senate to postpone a confirmation vote until the 2020 session.

DeSantis defended Rivkees and often praised the surgeon general during the early months of the administration. Rivkees, for instance, declared a public health emergency because of a hepatitis A outbreak and launched an aggressive vaccination campaign against the disease, which can cause liver damage.

But Rivkees has come under fire during the COVID-19 pandemic. In April 2020, he appeared to be removed from a public meeting by a top DeSantis aide after acknowledging that people would have to wear masks and socially distance until a vaccine became available for COVID-19 and that it could take up to a year or more.

His public appearances with the governor became limited, though Rivkees continued to take part in daily calls with hospital officials and providers last year as the state battled the first wave of the virus.

Howell, now with the Florida Institute for Health Innovation, said Rivkees did a good job working with people on the front lines during the pandemic.

"That he has done very, very, well," Howell said. "That’s hard to do without a medical leader."

Chris Nuland, a Jacksonville healthcare attorney, and lobbyist, praised Rivkees and his ability to work with healthcare providers during the pandemic.

Nuland noted Rivkees recently issued an order that authorized registered nurses and paramedics to provide monoclonal antibody treatment at state-supported centers. The order means that patients who have been diagnosed with COVID-19 don’t need to first get physicians’ orders approving the treatment before going to the centers.

Nuland, who represents physician groups, said Rivkees' order goes beyond the scope of practice, or what is authorized by law, for nurses and paramedics.

"But he got away with it. He was quietly effective," Nuland said. "He goes with good feelings from the medical community."