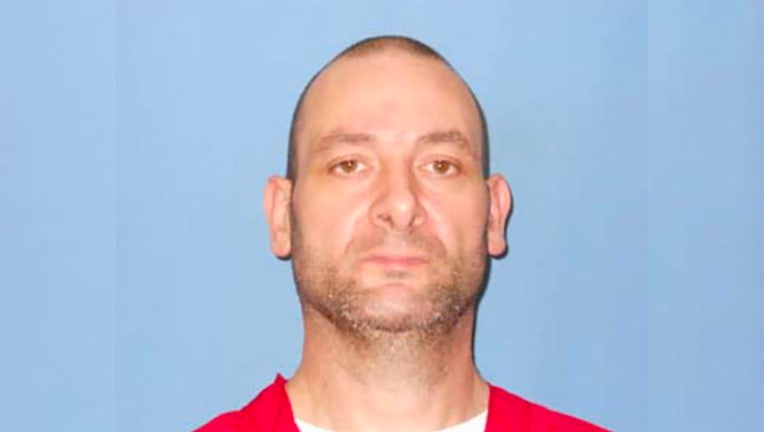 PONTOTOC, Miss. - Authorities have uncovered the remains of a Mississippi woman following a tip from an inmate who revealed the location of her body prior to his execution on other crimes last month.

On Sunday, police discovered what's believed to be the body of Felicia Cox on land that had once belonged to her family in Pontotoc County. The remains will be taken to the state crime lab for an autopsy and DNA testing to confirm identity, according to Pontotoc County Coroner Kim Bedford.

Last month, David Neal Cox became the first inmate executed in Mississippi in nine years. Cox pleaded guilty in 2012 to capital murder for the May 2010 shooting death of his estranged wife, Kim Kirk Cox. He also pleaded guilty to multiple other charges, including sexual assault. A jury handed down the death sentence.

Cox wore a red prison jumpsuit and was covered by a white sheet during the execution. Wide leather straps held him down on a gurney.

"I want my children to know that I love them very much and that I was a good man at one time," Cox said just before the injection started. "Don’t ever read anything but the King James Bible."

Among those who witnessed the execution was Cox’s now 23-year-old stepdaughter. She was 12 when he sexually assaulted her three times in front of her wounded mother as he held them and one of her younger brothers hostage on the night of May 14 and May 15, 2010, in the small town of Sherman.

Kim Cox’s father, retired law enforcement officer Benny Kirk, said David Cox called during the night of the attack and said he had shot Kim. Benny Kirk spoke on the phone with his daughter and she told him: "‘Daddy, I’m dying.’"

Police surrounded the house and tried to get David Cox to release his wife and the two children. Kim Cox was dead by the time the ordeal ended after more than eight hours.

Cox had dropped his appeals, filing court papers calling himself "worthy of death" before the state Supreme Court set his execution date.

Questions had remained about whether David Cox was responsible for the 2007 disappearance of Felicia Cox, his brother’s wife, who was last seen in a neighboring county. Her daughter, Amber Miskelly, recently told WTVA-TV that David Cox was the last person to see her mother alive.

Before his Nov. 17 execution, David Cox told his attorneys he killed Felicia Cox in 2007, providing detailed instructions on where investigators could find her remains and waiving his attorney-client privilege after death, according to John Weddle, the district attorney for several northern Mississippi counties.

The information was presented to Weddle’s office two days after Cox’s execution, the district attorney said last week, adding that David Cox has been a longtime suspect in his sister-in-law's disappearance.

"Our office is greatly indebted to many as we reflect on the discovery of what appears to be the remains of Felicia Cox today in Pontotoc County," Weddle said Sunday in a statement posted to his official Facebook page. "We are thankful the family can now begin the process of giving Felicia Cox a burial."