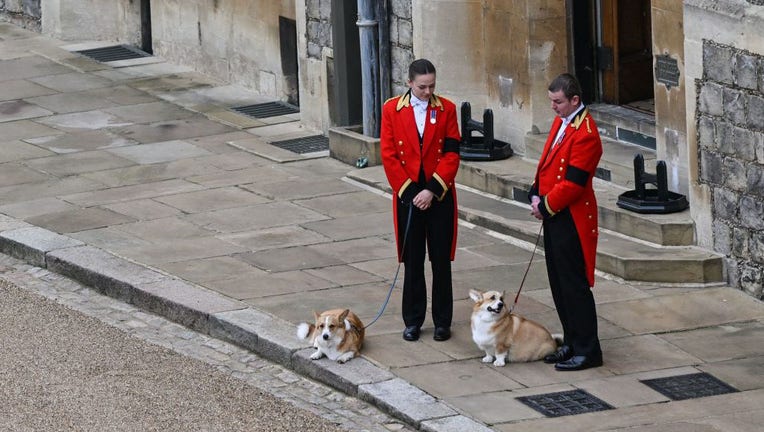 The Queen's corgis, Muick and Sandy are walked inside Windsor Castle on Sept. 19, 2022, ahead of the Committal Service for Britain's Queen Elizabeth II. (Photo by GLYN KIRK/POOL/AFP via Getty Images)

LONDON - Sarah Ferguson, Duchess of York, called it a "big honor" to have taken in the late Queen Elizabeth II’s beloved corgis.

The duchess gave an update about the well-being of Muick and Sandy in an interview with The Telegraph, published on Oct. 5. Ferguson called the late monarch’s dogs "national treasures" and said they had "been taught well."

The queen owned nearly 30 corgis throughout her life, largely becoming part of her public persona. Elizabeth’s death on Sept. 8 at age 96 had raised public concerns over who would care for her most recent beloved corgis, Muick (pronounced "Mick") and Sandy.

After the monarch’s passing, it was reported that the corgis would go to live with Ferguson and her ex-husband, Prince Andrew, who is the queen’s third child. The Duke and Duchess of York currently live together at the Royal Lodge on the Windsor estate in spite of divorcing.

Prince Andrew gifted the two corgis to his mother in March 2021 to help lift her spirits while Prince Philip was hospitalized, according to The Telegraph. The Duke of Edinburgh died at age 99 in April of that year.

The corgis now join several other dogs at the Royal Lodge, as the Duke and Duchess of York already have five Norfolk terriers.

"They all balance out," Ferguson told The Telegraph, laughing. "The carpet moves as I move but I’ve got used to it now."

Muick and Sandy were photographed with handlers and Prince Andrew at Windsor Castle on Sept. 19 as the monarch’s casket was brought to the estate to be laid to rest. 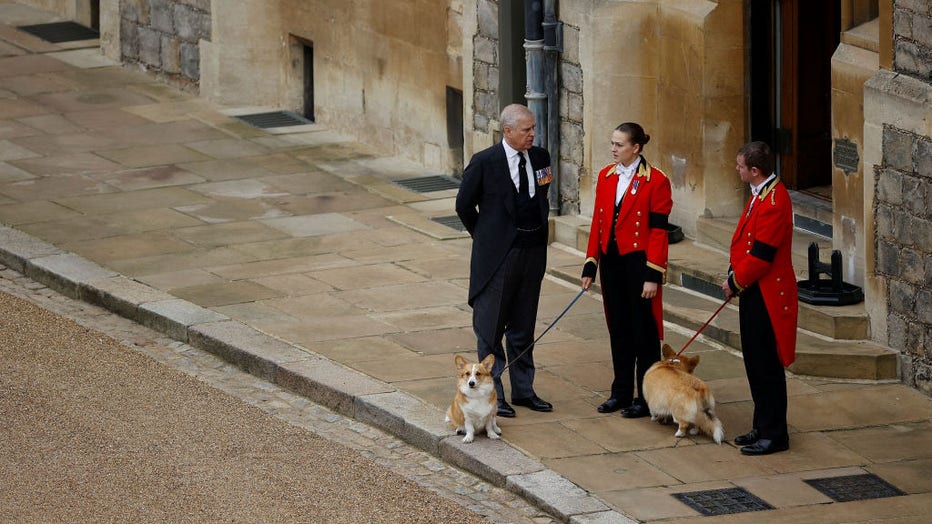 Images of a young Elizabeth walking the dog outside their lavish London home would be the first among many to come over the decades. 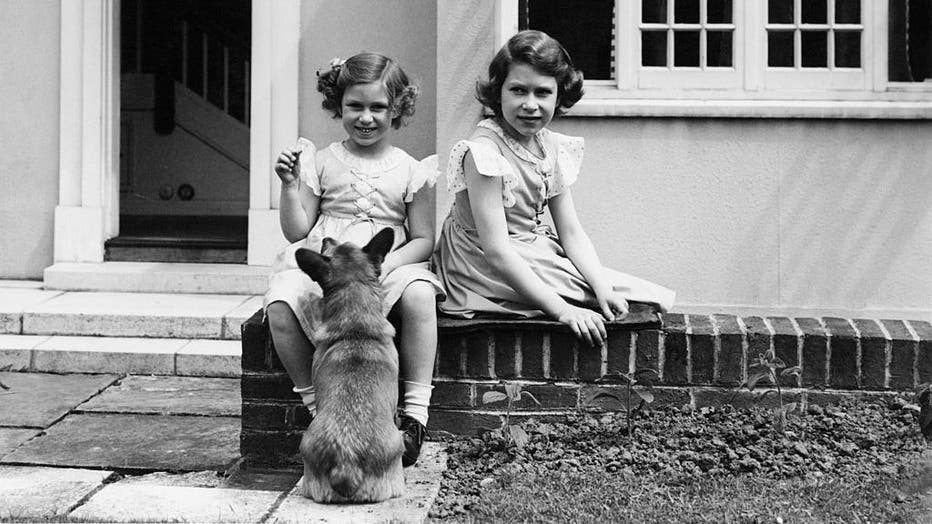 Princess Elizabeth and Princess Margaret play with a corgi outside the Welsh House at the Royal Lodge, Windsor, June 1936. (Photo by Lisa Sheridan/Studio Lisa/Hulton Archive/Getty Images)

When she was 18 she was given another and named it Susan, the first in a long line of corgis to come. Later there were dorgis — a dachshund and corgi crossbreed — owned by the queen. Eventually, they came to accompany her in public appearances. 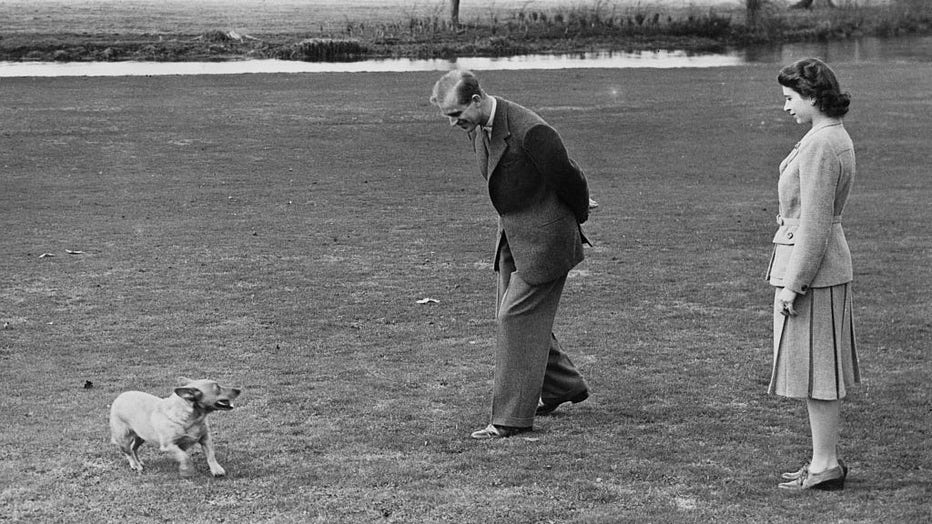 Princess Elizabeth and the Duke of Edinburgh playing with the Princess's pet corgi Susan at Broadlands in Hampshire, during the start of their honeymoon, Nov. 24, 1947. (Photo by Topical Press Agency/Hulton Archive/Getty Images)

Throughout Elizabeth’s 70 years on the throne, the corgis were by her side, accompanying her on official tours, reportedly sleeping in their own room at Buckingham Palace with daily sheet changes, and occasionally nipping the ankles of the odd visitor or royal family member.

Three of them even appeared alongside the queen as she climbed into James Bond’s waiting helicopter in the spoof video that opened the 2012 Summer Olympics in London.

Elizabeth walked and fed the dogs, chose their names, and when they died, buried them with individual plaques, according to British author Penny Junor who wrote the 2018 biography "All the Queen’s Corgis."

Norfolk, England, UK, 1970: Britain's Queen Elizabeth II smiles radiantly during a picture-taking session in the salon at Sandringham House. Her pet dog looks up at her. (Getty Image)

"She was also concerned about what would happen to her dogs when she is no longer around," Junor wrote, noting that some royal family members did not share her fondness for the corgis.

In addition to her human family, Elizabeth is survived by the two corgis, as well as a dorgi, a cocker spaniel, and other animals — including her black pony, Emma.

The queen’s fell pony was among those who paid their respects as her coffin was driven during the procession to Windsor Castle. Elizabeth regularly rode Emma for light exercise around Windsor Castle for the past 15 years. 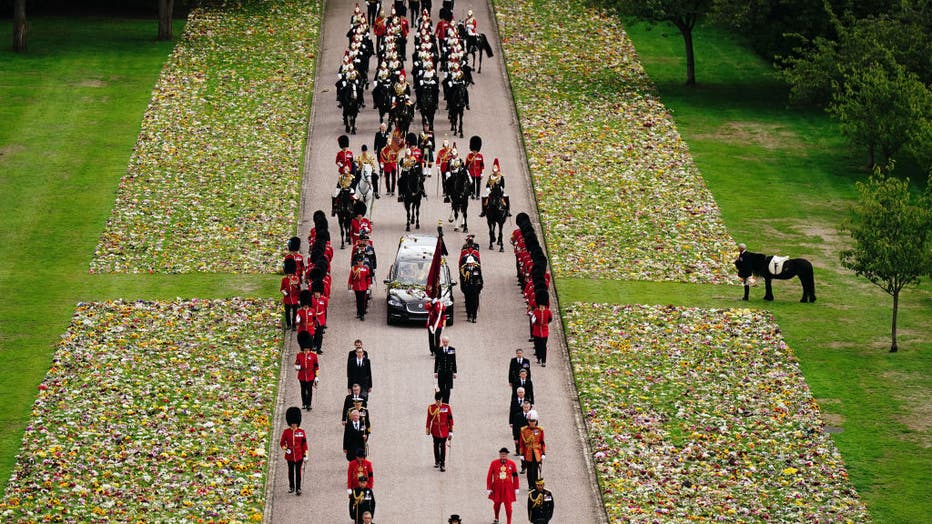 Emma, the monarch's fell pony, stands as the Ceremonial Procession of the coffin of Queen Elizabeth II arrives at Windsor Castle ahead of the Committal Service at St George's Chapel on September 19, 2022, in Windsor, England. (Photo by Aaron Chown-WP

On Saturday, Buckingham Palace shared a new photo of Emma and wrote that she would "continue to be much-loved and cared for at the Royal Mews, Windsor, and regularly exercised by its small, dedicated team."