The protester Los Angeles Rams linebacker Bobby Wagner tossed to the ground during this week's Monday Night Football game has filed a police report, a representative confirmed to FOX 11.

The incident happened in the second quarter of the Rams' game against the San Francisco 49ers at Levi's Stadium in Santa Clara. Two separate protesters attempted to get onto the field, each in bright shirts equipped with smoke bombs.

The first protester was caught before she was able to get to the field. The second, identified as Alex Taylor, was able to get onto the field. As Taylor approached the Rams' sideline, Wagner and fellow Rams Linebacker Takkarist McKinley took matters into their own hands, brining Taylor to the ground before he could continue. 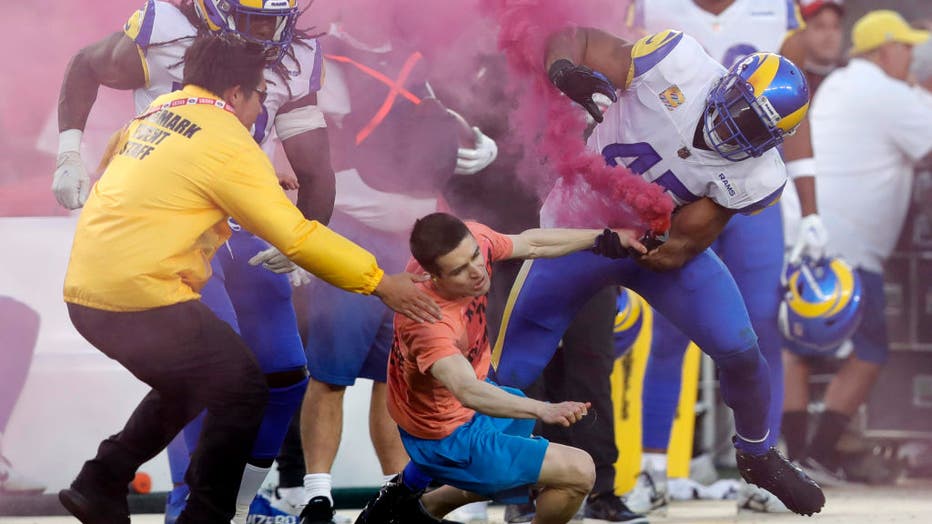 SANTA CLARA, CALIFORNIA - OCTOBER 03: A fan with a smoke bomb is tackled on the field by Los Angeles Rams' Bobby Wagner, #45 Takkarist McKinley #50 and a security guard during their NFL game against the San Francisco 49ers at Levis Stadium in Santa C

Direct Action Everywhere — the group claiming responsibility for both protestors — said in a now-deleted tweet that Taylor had "a burn on his arm, but otherwise the two protesters were "a bit beaten up but in good spirits."

A representative for Direct Action Everywhere told TMZ and confirmed to FOX 11 that Taylor filed a police report as a result of a "blatant assault" by the two linebackers, but provided no other details.

After Monday's game, Wagner said that he was just helping security. "I just saw someone running on the field," Wagner said. "It looked like he wasn’t supposed to be on the field so I saw security was having a problem so I helped them out."

Both protesters were cited after being escorted from the stadium Monday night. Wagner has not been charged with a crime.