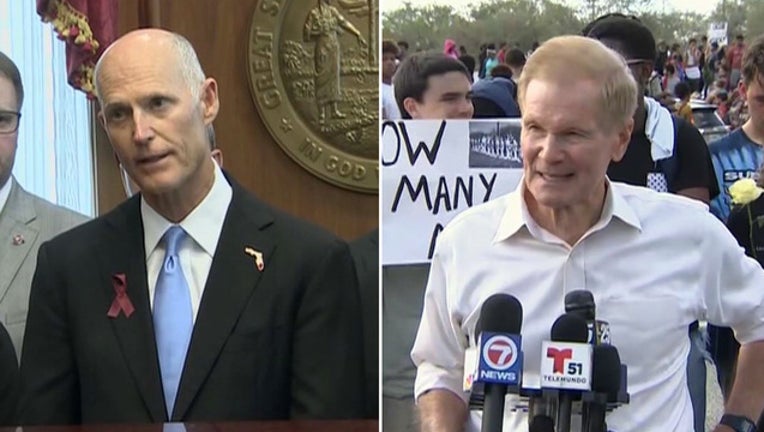 TALLAHASSEE, Fla. (NSF) - Gov. Rick Scott has an edge over Democratic incumbent Bill Nelson in this year’s U.S. Senate race, while large numbers of voters in both parties remain undecided on Florida’s next governor, according to a new poll.

The survey from the Florida Atlantic University Business and Economics Polling Initiative showed Scott, a Republican, with a 44.3 percent to 39.5 percent edge over Nelson in a survey of registered voters. Sixteen percent of the voters were undecided. Narrowing the poll to “likely” voters showed the two U.S. Senate candidates in a tie at 45 percent each.

In the Democratic field, former Miami Beach Mayor Philip Levine had 16 percent of the registered voters, while former U.S. Rep. Gwen Graham of Tallahassee had 15 percent, businessman Chris King of Winter Park had 10 percent and Tallahassee Mayor Andrew Gillum had 6 percent, the poll showed. Narrowed to likely primary voters, Levine had 17.6 percent, Graham 15.3 percent, King 10.5 percent and Gillum 6 percent, according to the poll.

“The Senate race in Florida continues to be very close and is going to be one of the most expensive and competitive contests in the nation,” said Kevin Wagner, an FAU political scientist who works with the polling initiative.

Wagner said approval ratings for President Donald Trump could be a factor for some Republicans, including Scott.

“President Trump’s approval ratings in Florida are edging up, and if that continues, it could help Rick Scott and other Republicans on the midterm ballot,” Wagner said.

Monica Escaleras, director of the Business and Economics Polling Initiative, said it was not unusual to have so many voters undecided in the primary campaigns for governor, “as even the leading candidates are still introducing themselves to much of Florida.”

The survey of 1,000 registered voters was conducted online and by telephone from Friday through Monday and had a margin of error of 3 percentage points. The samples for the gubernatorial primaries were smaller with larger margins of error.