The Pepper and Jester were revealed in a double-whammy elimination on "The Masked Singer" Wednesday night.

It was a double-whammy elimination on "The Masked Singer" Wednesday night as both the Pepper and Jester made their final appearance on the singing competition show.

Fans, plus some judges, were utterly shocked to see which two celebrities were hiding underneath the masks.

The Pepper was none other than British songwriter and singer, Natasha Bedingfield.

"It was really fun to just step into this world and be part of it, and I thought, ‘I’d love to come on the show,’ and trick my friend, Nicole," Bedingfield said. "Obviously, she wasn’t tricked." 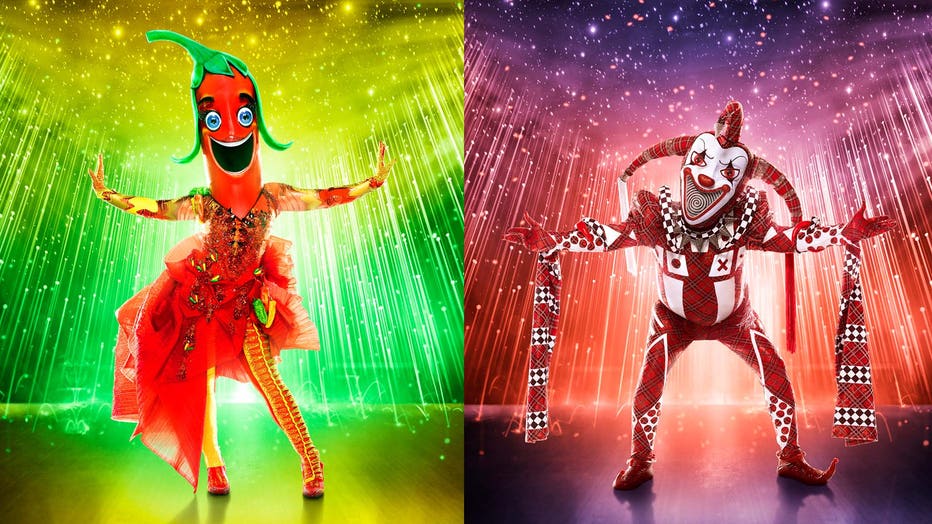 FILE - Side-by-side photo of the Pepper and Jester contestants on "The Masked Singer."

RELATED: FOX and ‘The Masked Singer’ creator to launch US version of Korean hit ‘Lotto Singer’

"Probably should have changed my voice when I was singing," Bedingfield said. "You know, she just knows me too well."

Bedingfield admitted that she could tell Scherzinger recognized her movements and voice right off the bat.

"She probably just knew even by my movements, that it was me," Bedingfield added.

"I have to thank you for being with me in this and giving me the freedom to really go for it," Bedingfield said as she spoke to her Pepper mask.

And the second reveal of the night was none other than the Jester who turned out to be legendary Johnny Rotten, lead singer of the Sex Pistols.

RELATED: The Hamster reveal on ‘The Masked Singer’ will blow you away

"It’s hilarious, it was the oddest thing in the world to ask me onto a show like this, but the way I am and my nature is, I like challenges," Rotten said. "This was a challenge to see if I could somehow pile-drive through this with proper, proper dignity."

"We have to challenge, not only ourselves but every other perception in this life, this is how we maintain our integrity and our innocence. I am a child," Rotten added.

Rotten, 65, went on to talk about his wife’s battle with Alzheimer’s disease and while she was not aware that her husband would be performing in the competition, Rotten said she would recognize his voice instantly.

"The person who I think is going to get the biggest kick out of this is my wife. and when she sees this it’s going to be a complete blast to her and she’ll know it’s me without a doubt," Rotten continued.

"I hope she spots me. If she doesn’t, she will at some point because we’ve been together now 45 years, we know each other intimately well, and no illness will get in the way of that," Rotten said.

RELATED: ‘The Masked Singer’ reveal: These contestants just got tossed

Rotten’s wife, Nora Forster, was diagnosed with Alzheimer’s disease in 2018 and her husband has taken on the role as her caretaker ever since.

"You are the wildest of all wild cards and we thank you," judge Ken Jeong said after Rotten’s reveal.

"It’s very rare, you meet people that have inspired generations, they gave liberty to people to express themselves, rebel. You mean so much to the world of music and I just want to thank you for all that you’ve done for music," judge Will.i.am. added.

"We’ve only got one life and we must explore all the possibilities and be limited by no one for no reason," Rotten said.

FOX News contributed to this report. This station is owned by the FOX Corporation.