SANTA CLARITA, Calif. - A Los Angeles County Sheriff’s Department detective is one of three off-duty law enforcement officers who heroically ran toward danger as bullets went flying and hundreds of students ran for cover in a deadly shooting at Saugus High School.

Detective Daniel Finn fought back tears and struggled to find the words as he exclusively recalled what happened that harrowing morning with FOX 11’s Gigi Graciette.

Detective Dan Finn, a 30-year veteran with the Los Angeles County Sheriff's Department is one of three off-duty police officers who ran toward danger when shots were fired at Saugus High School in Santa Clarita.

The 16-year-old, who authorities believe carried out the shooting, committed the attack on his sixteenth birthday. He is accused of killing two of his peers and injuring several others.

Finn, a 30-year veteran with the force, has taught active shooter training drills for a decade.

Detective Finn has a close connection to Saugus High and the city of Santa Clarita, the third-largest city in Los Angeles County.

“We’re a small community. There are a lot of law enforcement officers that reside in Santa Clarita. I have friends who work at this school. I have friends who have kids that go to this school…both my daughters attended Saugus when they were in high school. We take it very personally, but overall, I think it helps how our deputies operate on a day-to-day basis."

The detective, who once worked as a school resource deputy at Valencia High, was dropping off his girlfriend’s son at the school when he observed students scattering in all directions. Many of them had dropped their backpacks and ran as fast as they could. 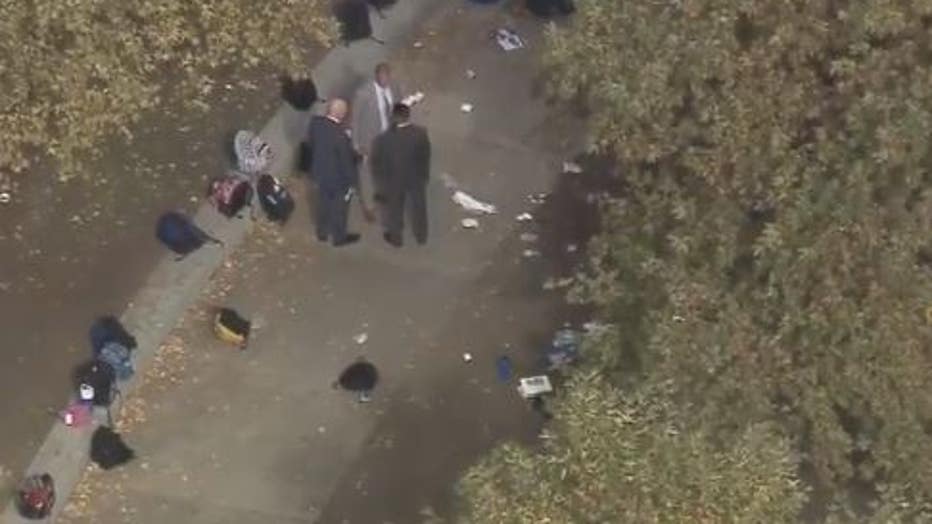 He initially thought it was a fight, but immediately recognized that it was more when he saw students running from every exit and every door, as others ran into classrooms.

He exited his vehicle, grabbed a student to ask what was going on, and was told there were gunshots on campus.

He did not hesitate and made the decision to assess the situation and relay that information to the Santa Clarita sheriff’s station.

Two other men joined him, who he later learned were also off-duty officers. They were the first on the scene, Los Angeles County Department Sheriff Alex Villanueva said in a press conference.

Entering the area where the shooting took place is an image that will forever be engraved in the officers' minds.

When they turned the corner from the administration building toward the quad area, everything went silent and the three officers saw three victims suffering from gunshot wounds lying down, he said.

He continued to describe the events that unfolded Thursday and described it as “surreal at first.”

"Between myself and the two others... we switched off between providing security and treated the individuals," he said.

A choir teacher is also credited for treating a gunshot wound victim in her classroom as students blocked the door.

Detective Finn, a father and grandfather, struggled to find the words to describe the terror throughout his interview with FOX 11. He was on the edge of tearing up when asked about two students, a 15-year-old girl, and a 14-year-old boy who died. He confessed he was having trouble coping with their deaths.

Students sent text messages to their parents in what many of them thought would be their final message as they hid from gunfire.

Detective Finn admitted the chaos was overwhelming for law enforcement and applauded how deputies from other agencies stepped in to help.

He said several firemen entered what was considered the "hot zone." Firefighters typically stay away from gunfire, but "things change when kids are involved," he said. Several responding firefighters had children who attend the school.

Detective Finn does not want to be called a hero, but his bravery, along with the courage of Officer Yanez and Officer Ramirez will not be forgotten.

The Santa Clarita community, living their worst nightmare, remained in shock Friday, but was coming together and taking steps to start its healing process.

A Disaster Distress Helpline was established to provide 24/7 immediate crisis counseling and support for those affected by the school shooting. The number to call is 1-800-985-5990.

The investigation was ongoing.