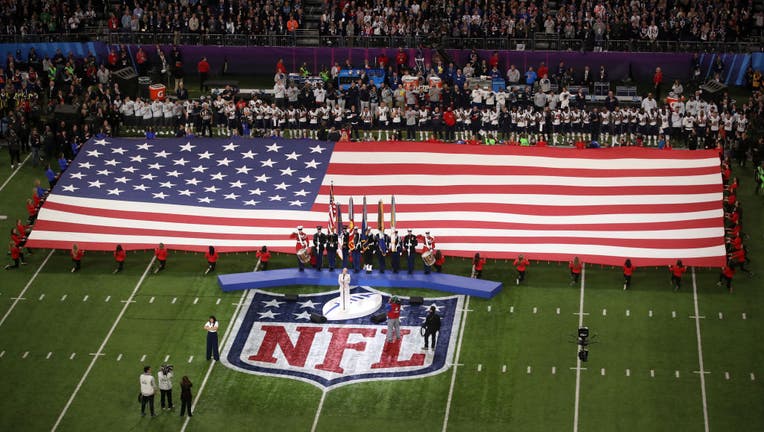 MINNEAPOLIS, MN - FEBRUARY 04: Pink sings the national anthem prior to Super Bowl LII between the New England Patriots and the Philadelphia Eagles at U.S. Bank Stadium on February 4, 2018 in Minneapolis, Minnesota. (Photo by Christian Petersen/Getty

The NFL will reportedly play “Lift Ev’ry Voice And Sing,” which is also known as the black national anthem, before every Week 1 NFL game in the 2020 season, according to ESPN.

The decision to play the song comes following the death of Minneapolis man George Floyd, which led to nationwide protests over racial inequality and police brutality.

According to the ESPN report, the song will be played before “The Star-Spangled Banner.”

Many players have been vocal about their stance on this topic. Washington Redskins running back Adrian Peterson, Arizona Cardinals quarterback Kyler Murray, and Cleveland Browns quarterback Baker Mayfield already have said that they will kneel for the national anthem.

The league and the NFL Players Association are also contemplating listing the names of victims on uniforms through decals on helmets or patches on jerseys, ESPN reported. The NFL also may produce educational programs about victims. They also have other plans that haven’t been identified.

The league hopes it demonstrates “a genuine commitment to the public, players and coaches and that player voices continue to be heard,” according to ESPN’s source.

NFL Commissioner Roger Goodell put out a video last month admitting that the league was wrong for not listening to their players when they knelt during the national anthem to protest racial injustice and police brutality.

"We, at the National Football League, believe Black Lives Matter," Goodell said in the video. "I personally protest with you and want to be part of the much-needed change in this country.

“Without black players, there would be no National Football League and the protests around the country are emblematic of the centuries of silence, inequality, and oppression of black players, coaches, fans, and staff. We are listening, I am listening, and I will be reaching out to players who have raised their voices and others on how we can improve and go forward for a better and more united NFL family.”