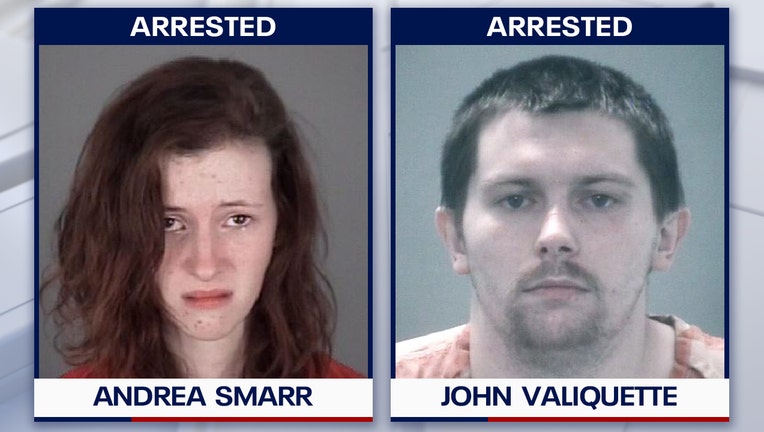 NEW PORT RICHEY, Fla. - The parents of a 14-month-old were arrested in the death of their child after an autopsy showed the child died from drugs, according to New Port Richey police.

Police said they began their investigation on Jan. 6 after receiving a report about the deceased child. When a detective arrived at the home, he said he found the 14-month-old boy dead in his pack-and-play style crib.

The child's mother, 20-year-old Andrea Smarr, told police that her son was alive and well when she put him in the crib for the night on Jan. 5, around 10:30 p.m. But she said she found the boy dead the next morning around 10:50 a.m.

At first, investigators said there were no obvious signs of injury to the little boy. However, they said methamphetamine and fentanyl were seized from the home, located on Hillside Drive. Several items indicative of narcotic use, such as small scraps of tinfoil, including some that were burnt, were also collected as evidence.

Detectives found a video surveillance camera in the living room, which showed the young victim with his father, 24-year-old John Valiquette. According to investigators, Valiquette fell asleep on the floor around 9:55 p.m., which allowed the little boy to roam around the living room unsupervised.

"At 10:17 p.m., the victim goes between the sofa and coffee table and picks up what appears to be a scrap of tin foil from the floor. He places it in his mouth and gets on the sofa," investigators wrote in the arrest report.

When she noticed her son had something in his mouth, she could be seen quickly removing it, investigators said.

Smarr then took the little boy into his room and put him in his crib. Detectives said the video from another surveillance camera in the child's bedroom showed that the 14-month-old was still moving when he was put into the crib by his mother.

After an autopsy was performed, the medical examiner determined the 14-month-old's death was "was attributed to combined drug toxicity" with both methamphetamine and fentanyl being discovered in the little boy's system.

New Port Richey police arrested both parents, who are each charged with aggravated manslaughter of a child.