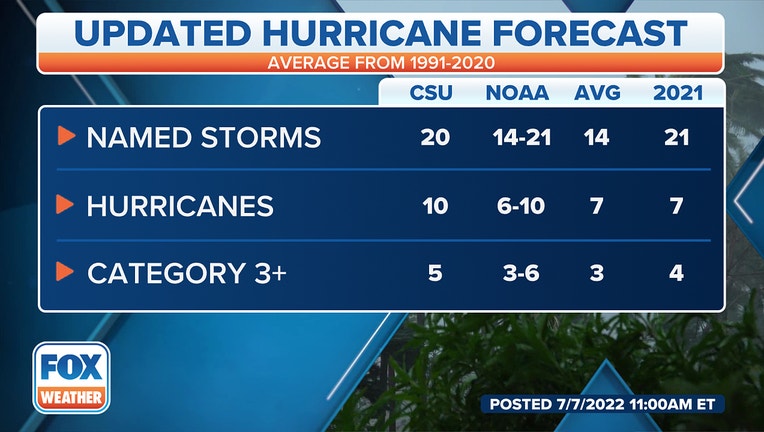 FORT COLLINS, Co. - A little more than a month into the Atlantic hurricane season, forecasters with Colorado State University have released an update to their outlook for 2022 and still expect 20 named storms.

Previously, CSU updated its forecast on June 2, predicting 20 named storms, including 10 hurricanes with five becoming Category 3 or stronger with winds of at least 115 mph. The new outlook released Thursday accounts for the three named storms that have already formed, meaning 17 additional tropical cyclones could develop throughout the rest of the season.

This forecast from CSU depicts another record season for the Atlantic Basin, calling for tropical storm and hurricane activity to be well above average.

CSU forecasters partially attribute the above-average season to La Niña, which is forecast to persist through the remainder of the Atlantic hurricane season.

Early in the Atlantic hurricane season, the National Hurricane Center has crossed off three names from the 2022 list – Alex, Bonnie and Colin. The season is running about a month ahead of average, as the third named storm doesn't typically form until Aug. 3.

Hurricane Bonnie started as a potential tropical cyclone in the Atlantic Ocean and then crossed Central America, emerging into the Pacific Ocean, becoming the first major hurricane in the Eastern Pacific this year as a Category 3 storm off the coast of Mexico.

About the CSU seasonal forecast

This is the 39th year CSU has released a forecast for the tropical weather season.

"It all got started with Dr. Bill Gray, who basically was the first one anywhere to do these season hurricane predictions for the Atlantic," Klotzbach says.

The Colorado State team was founded by the late Dr. William Gray, who led the program for decades.

HOW THE CSU FORECAST IS MADE

"He made fundamental contributions to all sorts of tropical meteorology," Klotzbach says about Gray. "He was like Wikipedia before there was Wikipedia. He was kind of an online encyclopedia."

Gray was able to associate the amount of hurricane activity with climate patterns.

Because of his discovery of the correlation, the program as well as his forecasts became world-renowned. Now, nearly 40 years later, Klotzbach and the CSU tropical weather and climate research team continue the legacy and issue the forecast annually.