TAMPA, Fla. - A $70-million bill that prioritizes resources for Florida fathers, among other services to help children and families, was signed into law with the support of founders of several pro-fatherhood foundations, including a Hall of Famer Tony Dungy.

HB-7065 was signed at One Buc Place in Tampa on Monday morning by Gov. Ron DeSantis, who said one of the "worst social trends is the decline of fatherhood."

"This isn’t going to solve everything, but it’s going to help," he said after signing the bill. "You’re not a man by leaving your kids out to dry. You need to be there."

The bill deals largely with the Department of Children and Families and proposes changes that would prioritize resources for fathers and help for current and former foster children.

During a visit to Tampa, Gov. Ron DeSantis signed a new bill into Florida law that would focus on pro-fatherhood initiatives, including a new statewide campaign, and provide the funding to programs that help provide resources for families.

A main part of the bill would direct the department to contract for the creation of the "Responsible Fatherhood Initiative." The department would contract with an entity to launch a website and distribute other materials that would inform fathers on effective parenting.

The fatherhood initiative also would include a print, television and social media campaign that "may include appearances by and involvement from public figures and influencers." 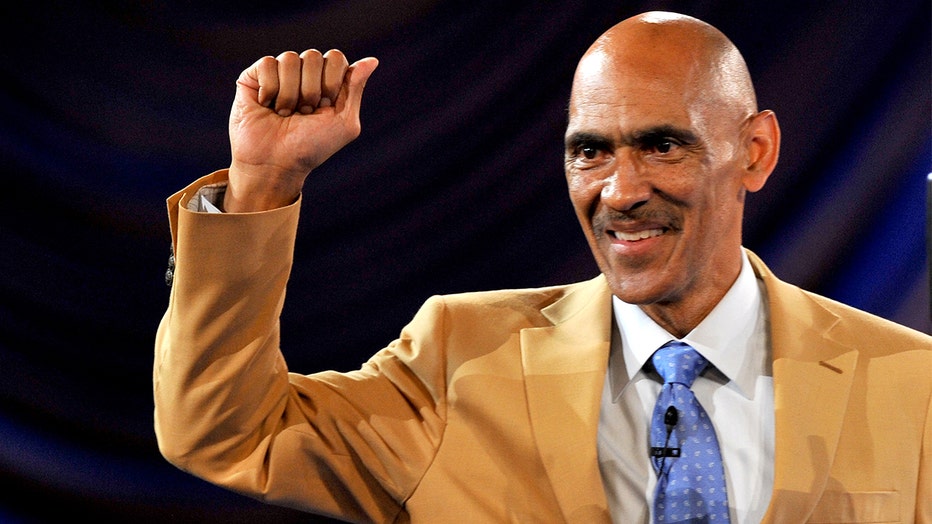 CANTON, OH - AUGUST 4, 2016: 2016 Hall of Fame enshrinee, coach Tony Dungy pumps his fist to the crowd after receiving his gold jacket during the Pro Football Hall of Fame Gold Jacket Dinner on August 4, 2016 at the Canton Memorial Civic Center in Ca

The department also would be required to award grants to non-profit community organizations to address the needs of fathers.

For instance, the bill would require that grants be geared toward helping fathers in "finding employment, managing child support obligations, transitioning from a period of incarceration, accessing health care, understanding child development and enhancing parenting skills."

That includes organizations such as "All Pro Dad," started by Dungy, a former Tampa Bay Buccaneers head coach who has remained involved in the Bay Area community. The foundation is based in Tampa and is "on a mission to help men love and lead their family well."

The Hall of Famer was present during the signing.

"It is just so important," he said in support of the new law. "It’s going to allow groups like ours, people like you, to do great things for our fathers here in Florida."

"I really appreciate the job he’s done," Gov. DeSantis said after Dungy spoke at the press conference. "He can do a lot of other things but he’s got a passion for this. When you’re somebody who is doing the Lord’s work, you got to support that."

The News Service of Florida contributed to this report