National Juneteenth Museum to be built in Fort Worth

Just four months after Juneteenth became a national holiday, plans are now in the works for a national Juneteenth museum in the Fort Worth.

FORT WORTH, Texas - Just four months after Juneteenth became a national holiday, plans are now in the works for a national Juneteenth museum in the Fort Worth.

Both of these were made possible thanks to a Fort Worth woman's dream.

The pen President Joe Biden used earlier this year to sign Juneteenth legislation making it a national holiday will be the focal point of the new museum.

Opal Lee, known as the grandmother of Juneteenth, championed for years for the day to become a national holiday.

"I was flabbergasted. I was humbled. I wanted to do a holy dance," Lee said.

The 95-year-old spent years fighting for the recognition of Juneteenth, which celebrates the day slaves in Texas learned about their independence, which was two years after the Emancipation Proclamation.

In June, Lee stood with President Biden as he officially made the day a national holiday.

Every year, she’d hold a commemorative walk to bring attention to Juneteenth and lobby for the holiday designation. 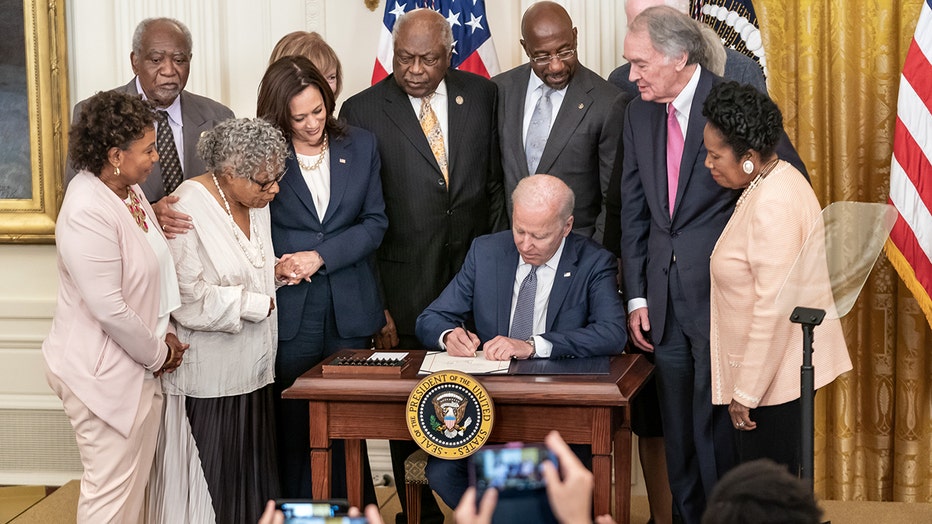 "This is happening because she never did give up," he said. "I mean, it’s remarkable. It’s one of a kind. And because of Miss Opal Lee, we get the chance to have it right here in Fort Worth."

The new facility will span across several blocks and take the place of the small Juneteenth museum run by Lee, currently at the corner of Rosedale and Evans streets.

Construction is expected to start next spring, with opening planned in 2024.

"It does have a lot of material about local people and the people whose shoulders we’ve stood on," Lee added.

Construction will cost somewhere between $25-$35 million, coming from a combination of private and corporate donors, as well as government partners.

"I can only imagine when we open this all up and we’ll probably have Washington down here and people all over the world," Nettles said.

Lee’s granddaughter, Dione Sims, is hopeful those donations come in from every corner of the country.

And even though she’s 95 years old, Lee said she’s still got work to do when it comes to educational and economic disparities, homelessness, and climate change.

"Oh, there’s so much more that has to be done," she said. "All of these things have to be addressed. And we’re going to get busy addressing some of them."