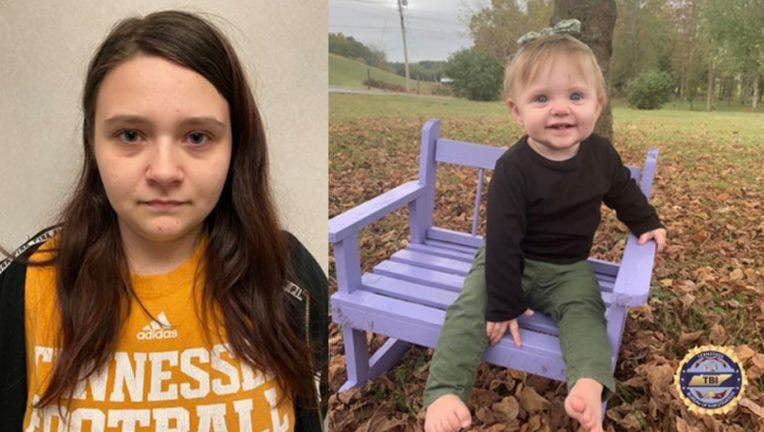 SULLIVAN COUNTY, Tenn. - A Tennessee mom was arrested Tuesday for allegedly making false reports related to the disappearance of her 15-month-old daughter, according to the Sullivan County Sheriff's Office.

Megan Boswell, 18, has given law enforcement conflicting information about her daughter Evelyn Mae Boswell, who was last seen in December but wasn’t reported missing until Feb. 18, the sheriff's office said in a statement.

“Further investigation revealed that some of the information provided by Megan Boswell was false,” the department added.

The Tennessee Bureau of Investigation issued an Amber Alert on Feb. 19 at the request of the Sullivan County Sheriff’s Office, a day after Evelyn's grandfather reported her missing, The Knoxville News Sentinel reported.

She was booked into the Sullivan County jail and remained there as of Tuesday evening in lieu of $25,000 bail.

Boswell told WCYB-TV she has been in contact with Evelyn's father who is in the military stationed in Louisiana and he plans to try to take leave to help look for her.

On Friday, she said she didn’t report her daughter’s disappearance because she “knew the person who had her, and I didn't want them to run away with her," she told WCYB. "And as soon as they thought anything was going on they just kinda vanished. So I'm just kinda worried, you know, about where they are at. What they're doing with her at this point in time."

She said Tuesday that she was referring to her mom, Angela Boswell, who was never "the best mother."

She said her mother "was supposed to babysit [Evelyn in December.] It didn't turn out that way."

Angela Boswell, 42, and a man, William McCloud, 33, were arrested in North Carolina last Friday where police said they were found inside a car that was reported stolen.

“If you talk to anybody who actually knows me, they know that I would never hurt Evelyn or do anything like that," Megan Boswell said, according to WCYB. She said the pain "just gets worse every day.”

"We know you have a lot of questions about this case. So do we," Tennessee Bureau of Investigation spokesman Josh DeVine said in a video on social media this week, NBC News reported.

None of them have been charged with her disappearance.