Brendan Khuri was the driver behind the wheel of a Lamborghini that ran a red light in West Los Angeles on Feb. 17, 2021. Khuri crashed into the vehicle of Monique Muñoz, killing her.

LOS ANGELES - Attorneys who represent the family of Monique Muñoz, who was killed when a teen ran a red light driving a Lamborghini SUV in West Los Angeles, announced Wednesday that an $18.85 million settlement was reached in the case.

"Today is a significant milestone because the Munoz family can finally get some closure for this horrific tragedy," said lead attorney Daniel Ghyczy after the settlement was reached Wednesday.

"The family faced numerous hurdles from both private insurance companies and the LA District Attorney’s office, and experienced the harsh realities of racism and bias against those from underserved communities. The family pleaded for the District Attorney to investigate this case and met with the office dozens of times to advocate for their family. It was never about money for the Munoz family, it was about the acknowledgment of Brendan Khuri’s misconduct that resulted in the death of their only daughter and to ensure that he was held accountable. Today’s settlement is a testament to their efforts and is a step closer to justice," Ghyczy continued.

Also Wednesday, new video of the fatal crash was released, which showed Khuri running a red light in his Lamborghini SUV before his vehicle violently crashed into the vehicle of Muñoz, killing her.

Details on the gruesome crash

On Feb. 17, 2021, investigators say Muñoz was on her way home from work at UCLA Health when she was hit and killed by the teen driver at the intersection of Olympic Boulevard and Overland Avenue. Officials said Khuri was speeding at 106 miles per hour at the moment of impact, according to prosecutors. He had been street "racing" against a female friend and swerving in and out of traffic for several blocks before the crash, according to prosecutors. 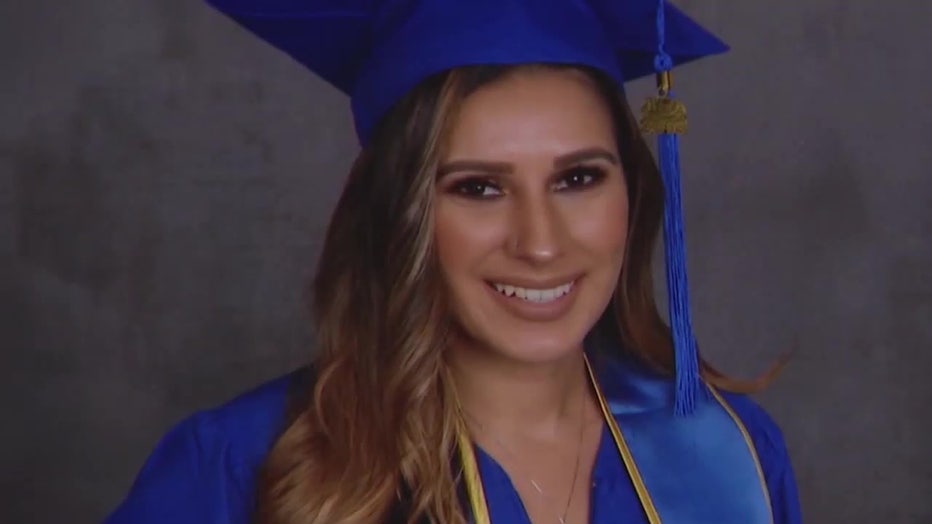 The suspect was identified as Brendan Khuri of Beverly Hills, who was 17 at the time. Last April, Khuri admitted to a charge of vehicular manslaughter with gross negligence. His name has since been released by authorities since he is no longer a juvenile.

He was then placed on house arrest after admitting the petition for vehicular manslaughter. Los Angeles County Superior Court Judge Sabina Helton ordered him confined to his mother’s home, where he wore an ankle monitor.

Last September, Khuri was sentenced to nine months in a juvenile detention center with four years of probation.

Family members and friends of Muñoz urged the judge to impose the maximum punishment against the driver. Following the sentencing, the Muñoz family told FOX 11 that the sentence didn't provide any justice to them.

"When you take a life, you got to give a life and that’s not the case here. It’s more of a lollipop sentencing and that’s what he got. Nine months and four years probation, I don’t agree with that. Like I stated before, rehabilitation absolutely... if your kid is incorrigible then he needs that rehabilitation, but not when they have committed a heinous crime like this, which is murder," Muñoz's uncle Richard Cartier said last fall.

Prosecutors argued Brendan Khuri was reckless behind the wheel

Prosecutors confirmed the teen's provisional driver’s license had been suspended at the time of the crash. They also learned that he'd been cited twice for speeding by the Beverly Hills Police Department in 2020, including driving 72 miles per hour on surface streets.

Although the fatal crash happened on Feb. 17, Khuri wasn't charged until April 7. Relatives of the victim and activists had alleged that charges had not been filed earlier because of the wealth and influence of the teen driver's father, James Khuri, described by Forbes as a multimillionaire who owns several real estate firms, manufacturing companies and an e-commerce business.

Despite those claims, Los Angeles Police Department Capt. Brian Wendling told the Los Angeles Times the Lamborghini driver's arrest was only delayed by the fact that he had to be hospitalized for injuries sustained in the crash.

Critics also argued that James Khuri's influence and status led to what the victim's family believed was a rather lenient sentence. The multimillionaire received heavy criticism for giving his teenage son the $200,000 Lamborghini as a birthday gift in 2020.

It was also revealed in the investigation that before the deadly crash Khuri and his father often posted on social media platforms about their involvement in illegal speed exhibitions, often with each other.

James Khuri was charged with a misdemeanor for contributing to the delinquency of a minor. His hearing is set for June 8.