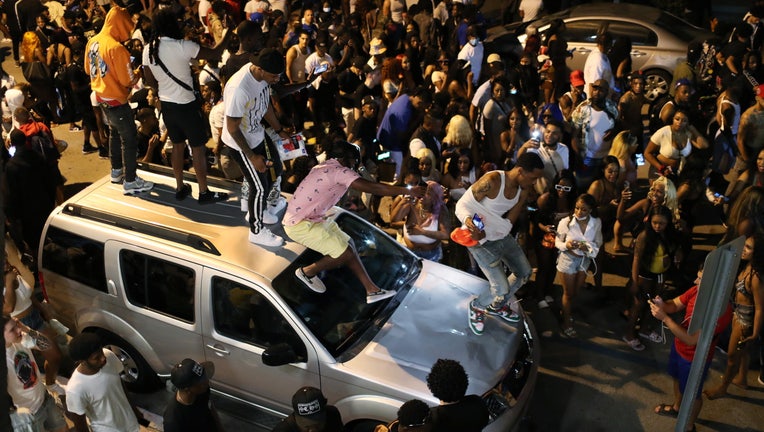 People gather while exiting the area as an 8pm curfew goes into effect on March 21, 2021 in Miami Beach, Florida. College students have arrived in the South Florida area for the annual spring break ritual, prompting city officials to impose an 8pm to

With more than 1,000 arrests and nearly 100 gun seizures already during this year's spring break season, officials are thinking it may finally be time to cleanse the hip neighborhood of its law-breaking, party-all-night vibe.

The move comes after years of increasingly stringent measures — banning alcohol from beaches, canceling concerts and food festivals — have failed to stop the city from being overrun with out-of-control parties and anything-goes antics.

This weekend alone, spring breakers and pandemic-weary tourists drawn by Florida's loose virus-control rules gathered by the thousands along famed Ocean Drive, at times breaking into street fights, destroying restaurant property and causing several dangerous stampedes. The situation got so out of hand that Miami Beach Police brought in SWAT teams to disperse pepper bullets and called in law enforcement officers from at least four other agencies. Ultimately, the city decided to order an emergency 8 p.m. curfew that will likely extend well into April after the spring break season is over.

"We definitely want people to come and have fun," Miami Beach Commissioner Ricky Arriola said Monday. "It's a nightlife city. We want people of all races, genders, sexual orientation. But we can’t tolerate people thinking they can come here and act out a scene from ‘Fast and the Furious,’ speeding down the streets and shooting guns in the air."

Some tourists are angry about the curfew, which they say has put a damper on long-sought vacations for which they paid good money. Meanwhile, some officials say they should have enacted more stringent measures sooner — as was done in New Orleans prior to Mardi Gras last month — instead of reacting in the middle of the chaos.

But Arriola and other commissioners argued the city may need an entirely different approach.

They note that over the past few seasons, the city has been steadily upping the ante with new rules and regulations, such as banning scooter rentals after 7 p.m. restricting alcohol sales after 8 p.m. and cracking down on loud music — to no avail.

"Every year we come up with new restrictions and they have no impact, so at what point are we going to try something new?" asked Arriola, who suggested hosting more family-oriented and business-friendly events.

The pandemic provided the perfect storm for large crowds: an unseasonably cold winter, pent-up demand from being quarantined at home and the lure of a sunny climate with miles of sandy beaches in a state with few COVID-19 restrictions.

New Orleans, which attracts thousands of tourists every year for Mardi Gras, successfully avoided the mayhem that erupted in Miami. Gov. John Bel Edwards, a Democrat, had already put a statewide mask mandate in place as well as occupancy limits on bars, restaurants and other businesses.

New Orleans Democratic Mayor LaToya Cantrell, also a Democrat, went even further by closing bars completely in the city, even those allowed to operate as restaurants. City officials also closed iconic Bourbon Street to cars and limited pedestrian access for the final weekend of the season.

Despite strong opposition from Republicans and business leaders, Edwards and Cantrell were determined not to repeat Mardi Gras 2020, which state officials later said contributed to New Orleans being an early Southern hot spot in the coronavirus pandemic.

"If people think they’re going to come to Louisiana, anywhere ... and engage in the kind of activities they would have pre-pandemic, then they are mistaken and, quite frankly, they are not welcome here to do that," Edwards said in a news conference ahead of Mardi Gras.

Miami Beach took less proactive measures under Republican Gov. Ron DeSantis, who has refused to implement a mask-wearing rule and has insisted on letting businesses stay open. Instead, city officials this year sent text messages that warned tourists to "Vacation Responsibly or Be Arrested" and spelled out a lengthy list of rules. The city also canceled all concerts and food festivals, trying to avoid large crowds, but that only left the throngs of people who showed up anyway to congregate aimlessly in impromptu street parties.

RELATED: Police: Crowd kicks sand onto officers while they attempt to arrest woman accused of having marijuana

Some visitors were frustrated by the mixed messages after being lured to the state by a $5 million national tourism advertising campaign, the largest in 20 years.

Reg Mac, a paralegal from Orlando, spent $800 on his trip to Miami, which he said was a bust thanks to the 8 p.m. curfew. He’d been looking forward to letting loose — and had even set aside special outfits for the after-hours scene.

"I was expecting to go out to enjoy the nightlife," said Mac, who instead returned to his hotel room to sleep. "The food was horrible and the service sucked."

Added Deaja Atwaters, who traveled from Harker Heights, Texas: "It’s unfortunate that you can’t do everything that we want to do, that we plan to do, but we’re going to make the best of it."

RELATED: ‘Do we have a problem?’ 2 teens arrested after altercation with Clearwater Beach lifeguard

Miami Beach officials said the crowd of partiers consisted mostly of adults from out of state, not college students. They said many of them didn't even patronize restaurants and local businesses.

"Not all people that visit Miami beach are bad and come to Miami Beach with the intent of breaking the law and disrupting our quality of life, but this is a different situation and it calls for drastic measures," said interim City Manager Raul Aguila, who enacted the emergency curfew.