The Colonial Drive exit is the primary exit to get to Downtown Orlando, but starting Saturday and continuing for the next year, it’s relocating.

ORLANDO, Fla. - A warning to anybody who drives I-4: Get ready for some chaos.

One of the busiest exits on the highway is moving across the street.

The Colonial Drive exit is the primary exit to get to Downtown Orlando, but starting Saturday and continuing for the next year, it’s relocating.

Drivers around Central Florida are so over I-4 that they literally want to be over I-4.

“I want a hovercraft so I can fly around the city and I don’t have to worry about I-4,” said Vonni Alicea, who lives in Orlando.

Come this weekend, there are new worries as the Florida Department of Transportation makes a major change at Exit 84, the Colonial Drive exit. 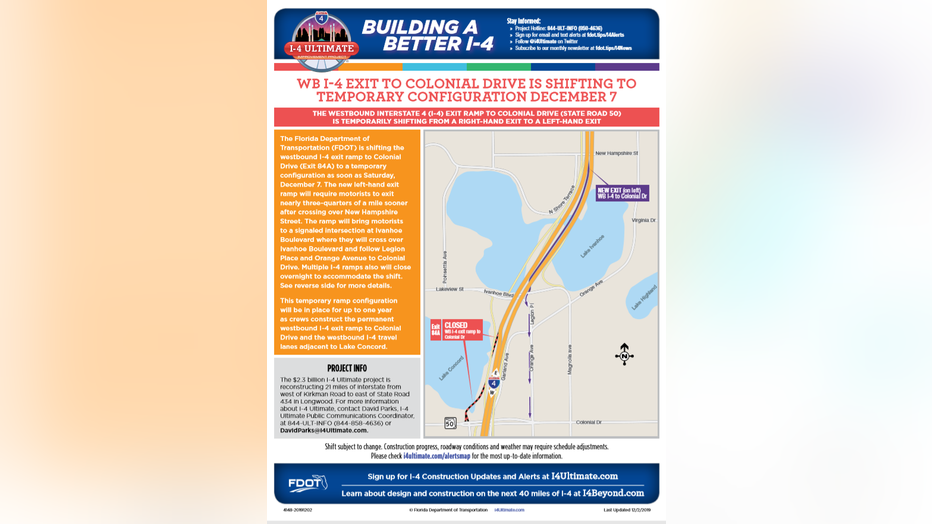 Starting Saturday, if you’re driving westbound into downtown, you’ll have to exit to Colonial Drive on the left instead of the right.

The exit is also going to come up a lot sooner.

It’s moving up three-quarters of a mile to just past New Hampshire Street.

The new exit ramp means drivers will have to cross over Ivanhoe Boulevard and follow Legion Place and Orange Avenue to Colonial Drive.

Big change coming to I-4

The westbound I-4 exit to Colonial Drve is moving. Drivers will now have to exit to the left instead of the right.

“I’m not surprised. It seems like it’s changing every other week at this point,” said Allison Davis, who lives in Orlando.

“That’s just going to create a lot of bottleneck, even more,” said Eric Van Nockay, who lives in Orlando.

The exit is expected to be like this for a year while contractors work on a new permanent Colonial Drive exit, giving drivers just enough time to figure out their new semi-permanent commute.