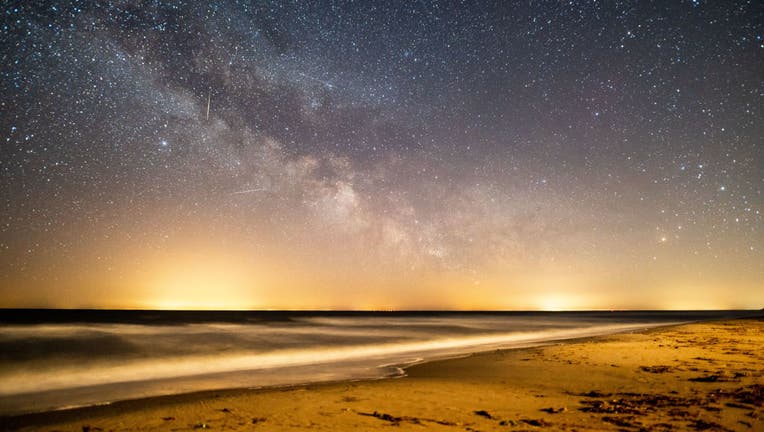 dpatop - 22 April 2020, Schleswig-Holstein, Neukirchen: The starry sky shines over the Baltic Sea. Mostly starry skies currently allow a clear view of the shooting stars of the Lyrids. Every year in April the earth crosses the rest of a comet's tail.

The Lyrid meteor shower will peak just in time for Earth Day.

It's known as one of the oldest meteor showers and typically peaks in late April every year.

The predicted peak for this year is late Thursday night, just before midnight.

What are the Lyrids?

NASA says that the Lyrids are one of the oldest known meteor showers and observed for 2,700 years. The first observation dates back to 687 BC by the Chinese.

While not as famous as the Perseids, astronomers say that as many as 100 meteors per hour can be seen during the shower.

The Lyrids shed from the comet C/1861 G1 Thatcher. NASA says that every year when the Earth passes through the debris trails of comets, bits collide with our atmosphere, where they disintegrate to create fiery and colorful streaks in the sky.

They often leave glowing dust trains behind them and can be seen for several seconds.

While the shower will pass by Earth from April 14-30, the predicted peak this year is at 4 UTC on April 22, according to EarthSky.

Best viewed under dark skies, skywatchers in the Northern Hemisphere will see the most Lyrids after moonset and before dawn.

NASA says that the meteors will appear to radiate from the constellation Lyra, but they can appear anywhere in the sky, which is why it is essential to lie on your back and take in as much sky as possible.

Most of the country will have a good chance of seeing meteors late Thursday into early Friday.

With another storm system affecting the Pacific Northwest and Northern Plains, mostly cloudy conditions will be likely.