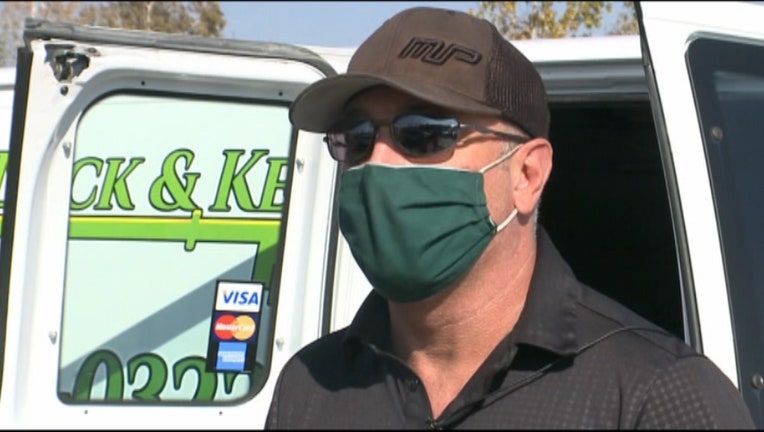 MIDWAY, Utah - A woman in Utah held against her will was saved by a locksmith after she wrote 911 on her hand, according to a report.

Grant Nielsen Eggertsen, 45, faces charges of aggravated kidnapping in the course of committing unlawful detention, as well as criminal trespass of a dwelling and simple assault after he kidnapped her at her home in Midway, about 45 miles southeast of Salt Lake City, the Deseret News reported.

A repairman showed up last Friday to replace the locks and she discreetly warned him with the signal on her hand.

RELATED: Texas man hunted his child's mother before murdering her

Eggertsen allegedly showed up the night before and refused to leave.

“She asked him to leave multiple times and he would not leave and he was holding her in her room against her will,” authorities wrote, adding that the suspect threatened to burn the house down.

Luckily, a locksmith, only identified as "Greg," noticed the woman had "911" written on her hand, and showed it to him while talking payments for services. He originally arrived to the home to change the lock in a door.

Greg picked up on the message, and contacted the sheriff's office.

"She's paying me and she's still showing me the '911' again, kind of making sure that I saw it. And I made eye contact with her," he told KSTU. "The lady was pretty smart you know, I mean, to be able to do what she did. And so, you know, it's not like I was trying to guess what was really going on. I mean, it was pretty...  you know, She gave me some great clues that there was an issue there."

When cops showed up after the locksmith called police, the woman “quickly opened the door and walked fast out the front door and stated that [Eggertsen] was downstairs in the house,” authorities said.

Eggertsen had a previous relationship with the woman, allegedly making threats against her, and Greg happened to come for a scheduled lock change because of those threats.

The case is being investigated as a matter of domestic violence.

FOXNews.com contributed to this report