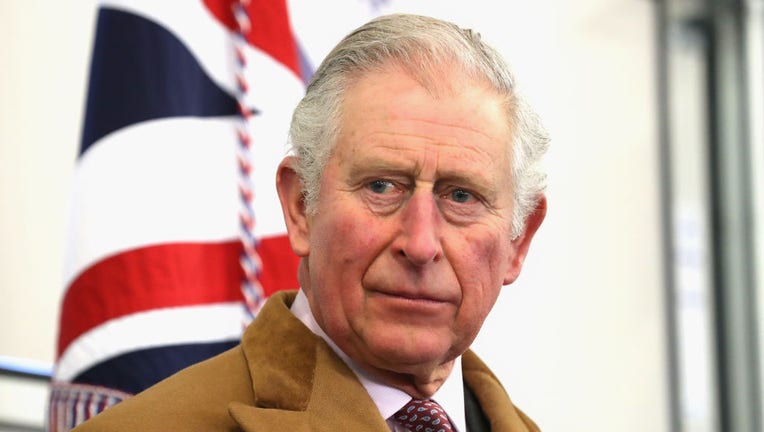 LONDON - Prince Charles has been preparing for the crown his entire life. Now, at age 73, that moment has finally arrived.

Charles, the oldest person to ever assume the British throne, became King Charles III on Thursday following the death of his mother, Queen Elizabeth II. No date has been set for his coronation.

After an apprenticeship that began as a child, Charles embodies the modernization of the British monarchy. He was the first heir not educated at home, the first to earn a university degree, and the first to grow up in the ever-intensifying glare of the media as deference to royalty faded.

He also alienated many with his messy divorce from the much-loved Princess Diana, and by straining the rules that prohibit royals from intervening in public affairs, wading into debates on issues such as environmental protection and architectural preservation.

"He now finds himself in, if you like, the autumn of his life, having to think carefully about how he projects his image as a public figure," said historian Ed Owens. "He’s nowhere near as popular as his mother."

Charles must figure out how to generate the "public support, a sense of endearment" that characterized the relationship Elizabeth had with the British public, Owens said.

Crowd sings 'God Save the Queen' outside Buckingham Palace

Hundreds of people flocked to Buckingham Palace on Thursday evening, September 8, after the Royal Family announced the death of Queen Elizabeth II. Footage taken by Tomas Petrus captures a crowd singing ‘God Save the Queen’ as it rained on Thursday night outside Buckingham Palace.

In other words, will Charles be as loved by his subjects? It’s a question that has overshadowed his entire life.

RELATED: Most don't know life without Queen Elizabeth II — how will the world cope without her?

A shy boy with a domineering father, Charles grew into a sometimes-awkward, understated man who is nevertheless confident in his own opinions. Unlike his mother, who refused to publicly discuss her views, Charles has delivered speeches and written articles on issues close to his heart, such as climate change, green energy and alternative medicine.

His accession to the throne is likely to fuel debate about the future of Britain’s largely ceremonial monarchy, seen by some as a symbol of national unity and others as an obsolete vestige of feudal history.

"We know the monarch and certainly the monarch’s family – they’re not meant to have political voices. They’re not meant to have political opinions. And the fact that he’s been flexing, if you like, his political muscle is something that he will have to be really careful with ... lest he be seen as unconstitutional," said Owens, who wrote "The Family Firm: Monarchy, Mass Media and the British Public, 1932-53."

Charles, who will be the head of state for the U.K. and 14 other countries, including Australia, Canada, New Zealand and Papua New Guinea, has defended his actions.

"I always wonder what meddling is, I always thought it was motivating," he said in "Prince, Son and Heir: Charles at 70," a 2018 documentary. "I’ve always been intrigued if it’s meddling to worry about the inner cities, as I did 40 years ago and what was happening or not happening there, the conditions in which people were living. If that’s meddling, I’m very proud of it."

In the same interview, however, Charles acknowledged that as king, he wouldn’t be able to speak out or interfere in politics because the role of sovereign is different from being the Prince of Wales.

Charles has said he intends to reduce the number of working royals, cut expenses and better represent modern Britain.

But tradition matters, too, for a man whose office previously described the monarchy as "the focal point for national pride, unity and allegiance."

That has meant a life of palaces and polo, attracting criticism that Charles was out of touch with everyday life, being lampooned for having a valet who purportedly squeezed toothpaste onto his brush.

But it was the disintegration of his marriage to Diana that made many question his fitness for the throne. Then, as he aged, his handsome young sons stole the limelight from a man who had a reputation for being as gray as his Saville Row suits.

Biographer Sally Bedell Smith, author of "Prince Charles: the Passions and Paradoxes of an Improbable Life,’’ described him as being constantly overshadowed by others in the family, despite his destiny.

"I think the frustrations are not so much that he’s had to wait for the throne," Smith told PBS. "I think his main frustration is that he has done so much and that ... he has been sort of massively misunderstood. He’s sort of been caught between two worlds: the world of his mother, revered, now beloved; and Diana, the ghost of whom still shadows him; and then his incredibly glamorous sons."

It took years for many in Britain to forgive Charles for his admitted infidelity to Diana before "the people’s princess" died in a Paris car crash in 1997. But the public mood softened after he married Camilla Parker Bowles in 2005 and she became the Duchess of Cornwall.

Although Camilla played a significant role in the breakup of Charles and Diana, her self-deprecating style and salt-of-the-earth sense of humor eventually won over many Britons. 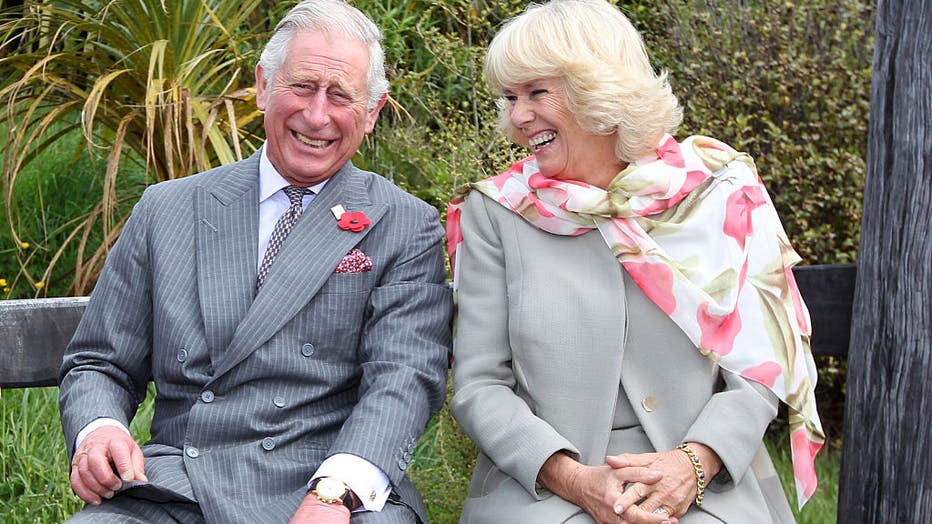 Prince Charles, Prince of Wales and Camilla, Duchess of Cornwall continue to laugh after a bubble bee took a liking to Prince Charles during their visit to the Orokonui Ecosanctuary on Nov. 5, 2015, in Dunedin, New Zealand. (Photo by Rob Jefferies/Ge

She helped Charles smile more in public by tempering his reserve and making him appear approachable, if not happier, as he cut ribbons, visited houses of worship, unveiled plaques and waited for the crown.

Her service was rewarded last February, when Queen Elizabeth II said publicly that it was her "sincere wish" that Camilla should be known as "Queen Consort" after her son succeeded her, answering questions once and for all about her status in the Royal Family.

RELATED: Camilla becomes queen, but without the sovereign’s powers

Prince Charles Philip Arthur George was born Nov. 14, 1948, in Buckingham Palace. When his mother acceded to the throne in 1952, the 3-year-old prince became the Duke of Cornwall. He became Prince of Wales at 20.

His school years were unhappy, with the future king being bullied by classmates at Gordonstoun, a Scottish boarding school that prides itself on building character through vigorous outdoor activities and educated his father, Philip.

Charles studied history at Cambridge University’s Trinity College, where in 1970 he became the first British royal to earn a university degree.

He then spent seven years in uniform, training as a Royal Air Force pilot before joining the Royal Navy, where he learned to fly helicopters. He ended his military career as commander of the HMS Bronington, a minesweeper, in 1976.

Charles’ relationship with Camilla began before he went to sea, but the romance foundered and she married a cavalry officer.

He met Lady Diana Spencer in 1977 when she was 16 and he was dating her older sister. Diana apparently didn’t see him again until 1980, and rumors of their engagement swirled after she was invited to spend time with Charles and the royal family.

They announced their engagement in February 1981. Some awkwardness in their relationship was immediately apparent when, during a televised interview about their betrothal, a reporter asked if they were in love. "Of course," Diana answered immediately, while Charles said, "Whatever ‘in love’ means."

Although Diana giggled at the response, she later said that Charles’ remark "threw me completely."

"God, it absolutely traumatized me," she said in a recording made by her voice coach in 1992-93 that was featured in the 2017 documentary "Diana, In Her Own Words."

The couple married on July 29, 1981, at St. Paul’s Cathedral in a globally televised ceremony. Prince William, now heir to the throne, was born less than a year later, followed by his brother, Prince Harry, in 1984.

The public fairy tale soon crumbled. Charles admitted to adultery to a TV interviewer in 1994. In an interview of her own, Diana drew attention to her husband’s relationship with Camilla, saying: "There were three of us in this marriage."

The revelations tarnished Charles’ reputation among many who celebrated Diana for her style as well as her charity work with AIDS patients and landmine victims. 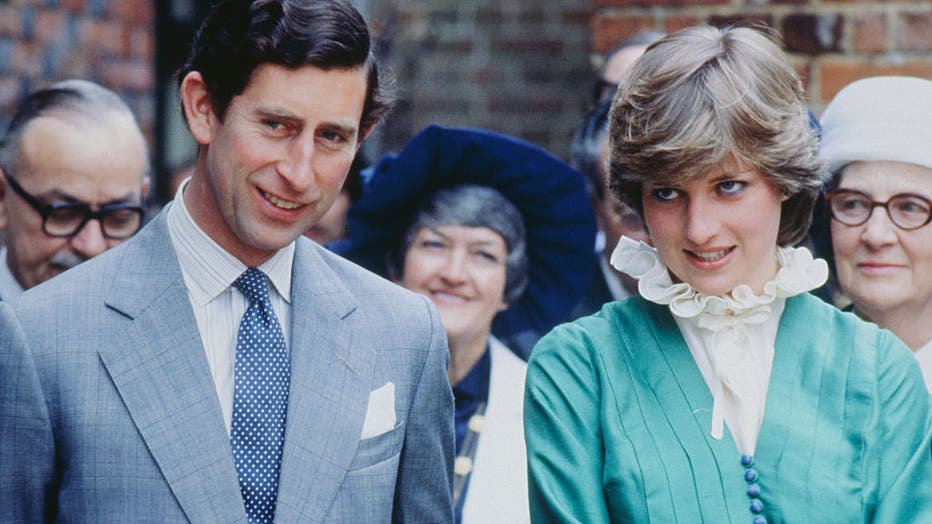 Prince Charles and Lady Diana Spencer opening the Mountbatten Exhibition at Broadlands, the home of Lord Louis Mountbatten, who was murdered in Ireland.

William and Harry were caught in the middle. While the princes revered their late mother, they said Charles was a good father and praised him as an early advocate for issues like the environment.

Tensions persist inside the royal family, underscored by the decision of Harry and his wife, Meghan, to step away from their royal duties and move to California in 2020. In a televised interview, they later said a member of the royal family had raised "concerns and conversations" about the color of their baby’s skin before he was born. The explosive revelation forced William to publicly declare the family wasn’t racist.

RELATED: Death of Queen Elizabeth II: What could change in the months ahead as Charles becomes king

Charles soldiered on, increasingly standing in for the queen in her twilight years. In 2018, he was named the queen’s designated successor as head of the Commonwealth, an association of 54 nations with links to the British Empire. The process accelerated after the death of her husband, Prince Philip, on April 9, 2021.

As Elizabeth declined, he sometimes stepped in at the last moment.

On the eve of the state opening of Parliament this year, on May 10, the queen asked Charles to preside, delegating one of her most important constitutional duties to him -- evidence that a transition was underway.

Camilla said in a 2018 documentary that Charles was comfortable with the prospect of being king.

"I think his destiny will come,’’ she said. "He’s always known it’s going to come, and I don’t think it does weigh heavily on his shoulders at all."