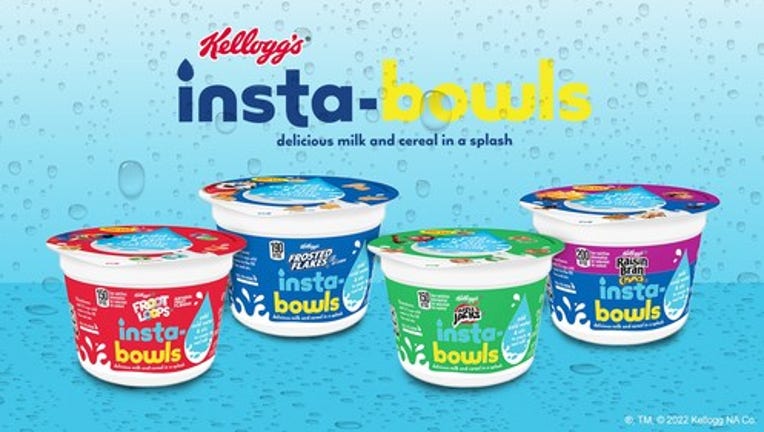 Add cold water to new Kellogg’s® Instabowls and get real milk, a delicious and convenient way to enjoy fan-favorite Kellogg’s cereals outside of the kitchen. (Credit: Kellogg Company)

BATTLE CREEK, Mich. - Kellogg's wants to help families on the go with its latest innovation by shortening preparation time.

The company has rolled out "Instabowls" where consumers can just add cold water to get milk instantly with their cereal.

RELATED: Kellogg’s will pay you $5,000 to eat cereal for dinner

"In recent years, there has been a huge trend toward portability for food, especially as busy schedules and life's everyday curve balls prevent traditional sit-down meals," Chris Stolsky, Marketing Director at Kellogg Company, said in a news release. "We created Kellogg's Instabowls as an easy solution for the 'anytime cereal break' so you can now bring your favorite Kellogg's cereals with you wherever life takes you and not have to worry about milk, dishes, or clean-up."

A California mom decided to prank her kids with frozen cereal and juice as an early April Fool's Day joke.

The company said each bowl is pre-portioned. Cereal lovers would just have to add cold water to the fill line and stir to get the milk.

Right now, the "Instabowls" are available at Walmart for a suggested retail price at $1.98.

The company plans to roll the product at additional retailers nationwide.

Kellogg’s had net sales of $14.2 billion in 2021, with $11.4 billion generated by its snack division, which makes Cheez-Its, Pringles and Pop-Tarts, among other brands. Cereal accounted for another $2.4 billion in sales last year while plant-based sales totaled around $340 million.

U.S. cereal sales have been waning for years as consumers moved to more portable products, like energy bars. They saw a brief spike during pandemic lockdowns, when more people sat down for breakfast at home. But sales fell again in 2021. In the 52 weeks to May 38, U.S. cereal sales were flat, according to NielsenIQ.

Kellogg’s cereal business was also rocked last year by a fire at a plant in Memphis, Tennessee, and by a 10-week strike by more than 1,000 workers at plants in four states. The strike ended after the company promised higher wages, enhanced benefits and a quicker path to permanent employment for its temporary workers.