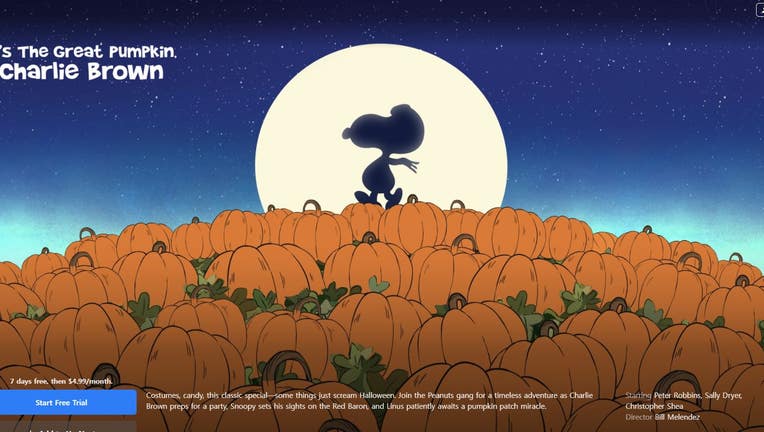 Watching "It's the Great Pumpkin, Charlie Brown" on TV each year is a holiday tradition for many Peanuts fans.

It was first broadcast on television back in 1966, but for the first time in more than 50 years, the holiday viewing -- along with other classic Peanuts holiday specials -- will not air on broadcast television.

Apple TV+ has gotten exclusive rights to air the shows, which for years aired twice in October on ABC.

MSN reports the streaming service, which is normally only available by subscription, will offer "It's the Great Pumpkin, Charlie Brown" at no cost from Oct. 30 to Nov. 1 for all viewers, though the holiday special is up on their service starting today for Apple TV+ subscribers.

Likewise, "A Charlie Brown Thanksgiving" will be free to watch from Nov. 25 to Nov. 27, but will be available to stream starting Nov. 18 for subscribers, according to The Verge. "A Charlie Brown Christmas" will be up on Dec. 4, and can be watched for at no cost from Dec. 11 to 13.

Many on social media were unhappy about the change, with one person calling it "just another 2020 disappointment."

"Americans love watching this special together," a Twitter user wrote. "You don't destroy a 55 year old tradition just to squeeze out a few more dollars."

Another replied, "Thanks for letting greed ruin tradition. Not everyone can afford to stream. These shows have been on broadcast tv for years and I know it might shock you but many people only watch broadcast tv. You know, not everyone has the means or access."