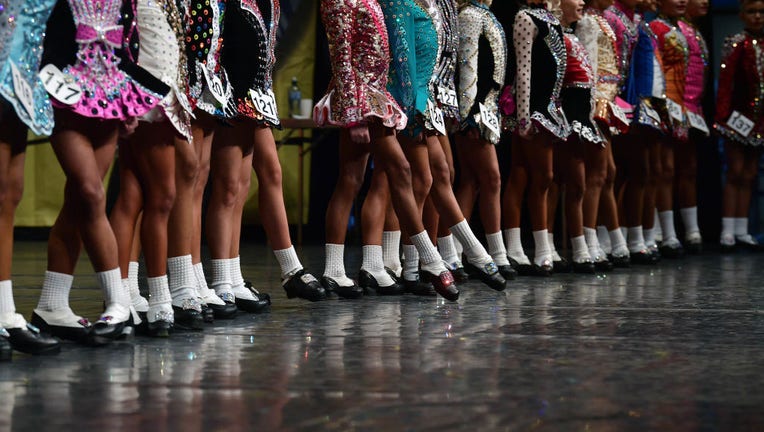 FILE - The dancers’ shoes and socks are seen on stage during the opening day of the World Irish Dancing Championships at the Waterfront Hall on April 10, 2022, in Belfast, Northern Ireland. (Photo by Charles McQuillan/Getty Images)

DUBLIN, Ireland - The world’s largest and oldest organization for competitive Irish dancing has launched an investigation amid allegations of competition "fixing."

The Irish Dancing Commission, also known in Irish as An Coimisiún Le Rincí Gaelacha (CLRG), shared a statement on its website that its ethics committee had "received allegations, with supporting documentation, of several grievous breaches of our Code of Conduct."

"Such unethical behaviour cannot and will not be tolerated by this organisation," the statement reads.

While the Irish dancing governing body did not specify what kind of breaches were reported, the Irish Independent published an exclusive investigation this week about "its largest ever alleged cheating scandal."

The report says some of the most successful and well-regarded Irish dance teachers and schools were accused of fixing competitions for their own students.

An Garda Siochana, the national police service for the Republic of Ireland, shared this footage, which they said shows Kathleen Kavanagh being played to by an officer named Mark, who is a member of the force’s band. Credit: An Garda Siochana via Storyful

The Irish Independent reported that screenshots of text conversations showing 12 Irish dance teachers either asking for, or offering to, fix competitions were handed over to the CLRG in July. The news organization added that it had seen more screenshots not yet handed over to the dancing commission, "which appear to implicate at least another six teachers."

After complaints were made to the CLRG’s ethics committee, an emailed statement was sent to members last week, which was viewed by BBC News.

"The evidence apparently dates back several years and identifies individuals allegedly offering various inducements to promote dancers to a higher-than-deserved placing at particular competitions," the statement read, according to the BBC. "It is believed that there are a number of teachers and schools implicated in the allegations."

The Dublin-based dance commission said it had appointed a former Irish Court of Appeal judge to oversee an investigation.

"Due to the potential extent of such allegations - and to ensure fairness, transparency and thoroughness - the services of an independent former judge of the Court of Appeal have been engaged to oversee and supervise the immediate investigation into these matters," the dance commission said.

"I welcome the fact that we have a retired judge investigating these matters. I think that’s really important," Martin told the Irish Independent.

"I will also be writing to the organization involved to seek assurances that they are taking every step necessary to restore confidence for families right across the world, that their children and their young people are being treated fairly," Martin added.