Who and what happened to Jimmy Hoffa?

Famous labor organizer Jimmy Hoffa was last seen on July 30, 1975. His remains have not been found.

Every few years, the mysterious disappearance of Jimmy Hoffa resurfaces in the headlines, and 2022 is no different.

Recently, there have been two instances of human remains being found at Lake Mead in Nevada after a noticeable drop in water levels due to drought conditions.

The first body was discovered in a barrel on May 1 along the newly exposed shoreline of the lake formed by Hoover Dam between Nevada and Arizona. In that case, police said the body was a man who had been shot, probably between the mid-1970s and the early 1980s because he was wearing shoes manufactured during that period.

Authorities in Nevada are investigating two instances of human remains found in Lake Mead after the water level severely dropped due to drought conditions.

The second case came a few days later after two sisters from the Las Vegas suburb of Henderson were paddle-boarding on the drought-stricken Colorado River reservoir when they spotted bones in the Callville Bay area of the lake. Investigators are not treating the case as a homicide, Las Vegas police said. The remains are currently with the Clark County Coroner’s Office.

RELATED: Expert claims to know where Jimmy Hoffa is. Hint: it's underground

FOX Television Stations has reached out to the coroner for comment.

To date, authorities have not identified either remains, and any theories that the discoveries are connected to the 1975 Hoffa mystery are social media conjecture.

Who was Jimmy Hoffa?

According to the Detroit Historical Society, James Riddle Hoffa was born in Brazil, Indiana, on February 14, 1913. At 7 years old, his father died of work-related conditions. When Hoffa dropped out of school and worked at a Kroger grocery, the memory of his father’s death motivated him to rally his co-workers to improve poor working conditions and unfair treatment. He led a strike and won.

From there, Hoffa organized the International Brotherhood of Teamsters and was elected union president in 1957, holding that position until 1971. Among his accomplishments, he negotiated the National Master Freight Agreement, which covered over 450,000 truck drivers. After that, his union grew into the largest union in the U.S. making him the country’s foremost labor organizer. 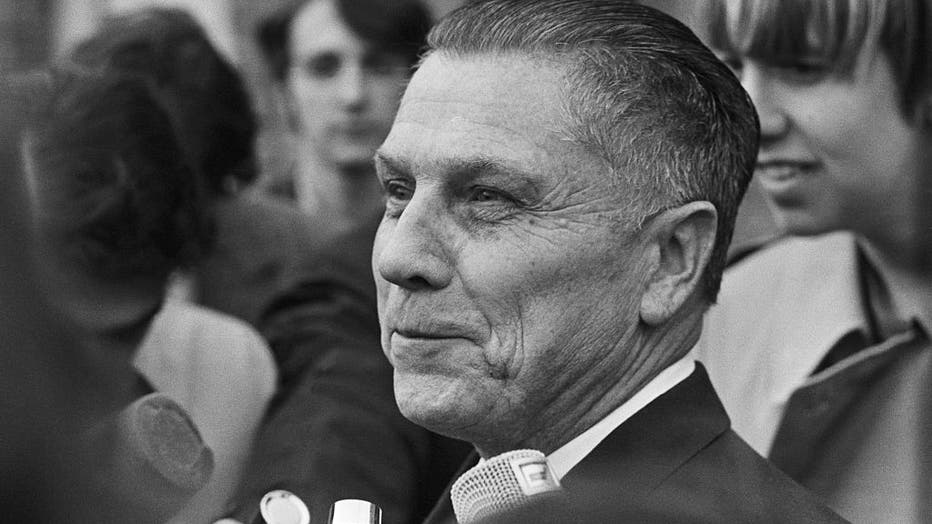 (Original Caption) Lewisburg, PA: James Hoffa, former president of the Teamsters Union smiles as he chats with newsmen in front of the Federal Prison, after he was released after serving 57 months. Photo dated 12/23/71.

However, he did have a criminal side. Hoffa was known to have connections with the Mafia which came under federal scrutiny. In 1964, he was convicted on jury tampering, attempted bribery, and fraud. President Richard Nixon pardoned him in 1971 with the stipulation that he would cease any further union activity until 1980.

In 1936, Hoffa married Josephine Poszywak, whom he met during a labor strike. They had two children, Barbara Ann Crancer, a judge and legal counsel, and James P. Hoffa, who became president of the International Brotherhood of Teamsters in 1999.

What happened to Jimmy Hoffa?

Hoffa was last seen on July 30, 1975, when he was to meet with reputed Detroit mob enforcer Anthony "Tony Jack" Giacalone and alleged New Jersey mob figure Anthony "Tony Pro" Provenzano at a restaurant in suburban Detroit.

More than 200 FBI agents were assigned to the case in New Jersey, Detroit and at least four other cities. During the period, more than 70 volumes of files were compiled, containing more than 16,000 pages. Six suspects in the disappearance, including Provenzano and Anthony Giacalone, were convicted on unrelated charges. 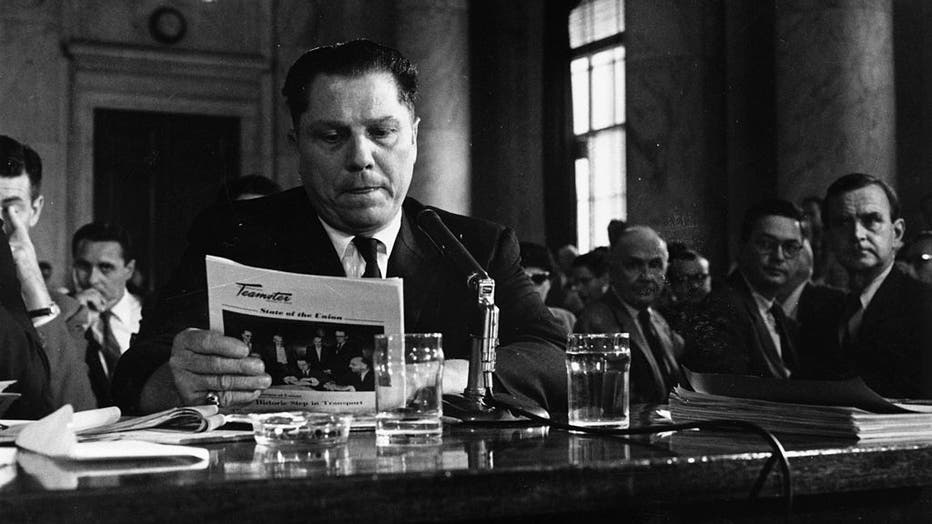 11th August 1958: American labour leader Jimmy Hoffa (1913 - 1975), President of the Teamster's Union, testifying at a hearing into labor rackets. Rumoured to have mafia connections, Hoffa disappeared in 1975 and no body has ever been found. (Photo b

It has been long speculated that Hoffa, who was 62, was killed by enemies because he was planning a Teamsters comeback. He was declared legally dead in 1982.

His remains have not been found.

In 2021, the FBI obtained a search warrant to "conduct a site survey underneath the Pulaski Skyway" in New Jersey. However, the affidavit in support of the search warrant was sealed by the court, and FBI officials are not able to release any information to the public.

In 2003, authorities dug beneath an underground pool at a home in Michigan’s Thumb area for a briefcase an informant said contained a syringe and possible evidence that Hoffa might have been injected with drugs or poison.

In 2004, detectives pulled up floorboards at a Detroit house after authorities drilled for soil samples in the floor of a shed in the Detroit suburb of Roseville in the previous September. 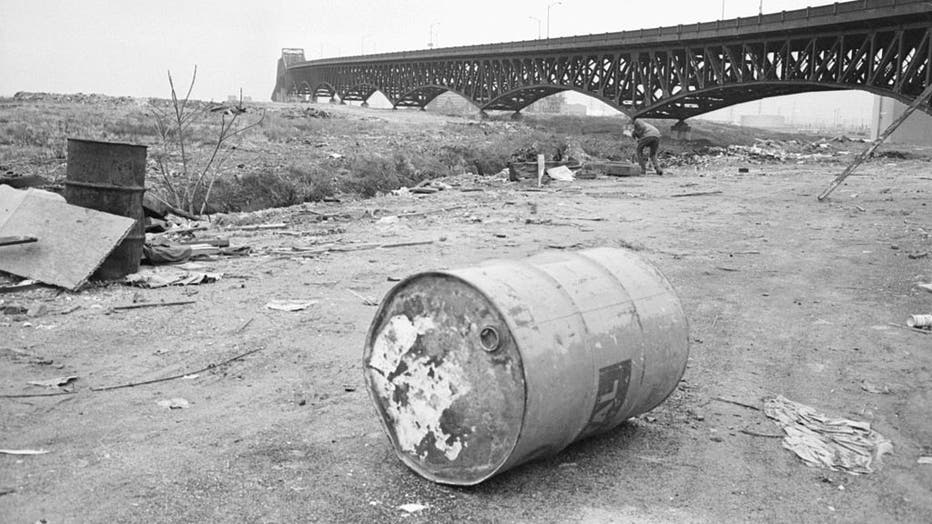 (Original Caption) A 55-gallon drum of the type reportedly used to transport the body of former Teamster boss Jimmy Hoffa to New Jersey lies in the 47-acre landfill area in Jersey City where the FBI has obtained a search warrant to dig for a body. Th

In 2006, the FBI spent 13 days searching a horse farm in Oakland County’s Milford Township, northwest of Detroit, for Hoffa’s remains.

"Right now the case remains open," he said. "At this point, if we do get logical leads and enough probable cause that warrant the resources to do an investigation, then we’ll continue to do so."

Some theories on Hoffa’s disappearance

A number of theories have emerged about Hoffa since he was reported missing, though many of them have been tied to book releases. From serious to scurrilous, here are some of the best:

Theory #1: Hoffa was killed on the orders of alleged New Jersey mob figure Anthony "Tony Pro" Provenzano. His body was "ground up in little pieces, shipped to Florida and thrown into a swamp."

Who put it forth: Self-described mafia murderer Charles Allen, who served prison time with Hoffa and participated in the federal witness-protection program, told the story to a U.S. Senate committee in 1982.

Outcome: The FBI never found enough evidence to support the claim and questions were raised about Allen trying to sell the story to make money.

Theory #2: Probably the most infamous had Hoffa buried under Section 107 of Giants Stadium in East Rutherford, New Jersey.

Who put it forth: Self-described hit man Donald "Tony the Greek" Frankos in a 1989 Playboy magazine interview.

Outcome: The FBI found nothing to support the claim and didn’t bother to show up when the stadium was demolished in 2010.

"When that information came to our attention we batted it around, but we were all convinced in the end that this guy was not reliable," FBI agent Jim Kossler said then. "We were able to prove to our mind that what he was telling us couldn’t have happened because he either couldn’t have been there or he was in jail at the time."

Theory #3: Hoffa was abducted by ″either federal marshals or federal agents,″ driven to a nearby airport and dropped out of a plane, possibly into one of the Great Lakes that surround Michigan.

Who put it forth: Former Hoffa aide and strong-arm Joseph Franco in the 1987 book ″Hoffa’s Man.″

Outcome:Other than Franco’s word, there was nothing to support his claim.

A Chicago Tribune review of the book put it this way: "Former New York Times reporter Richard Hammer, who helped Franco with the book, candidly writes in the introduction that the stories have the ‘ring of truth.’ Maybe, but they also reek of something else."