Forecasters said heavy rains were expected in a band from eastern Louisiana across central parts of Mississippi and Alabama and into far west Georgia.

JACKSON, Miss. - Forecasters are expecting heavy rains again in parts of the flood-ravaged South, prolonging the misery in neighborhoods surrounded by water.

Some of the hardest-hit areas in Mississippi were under a flash flood watch on Tuesday. 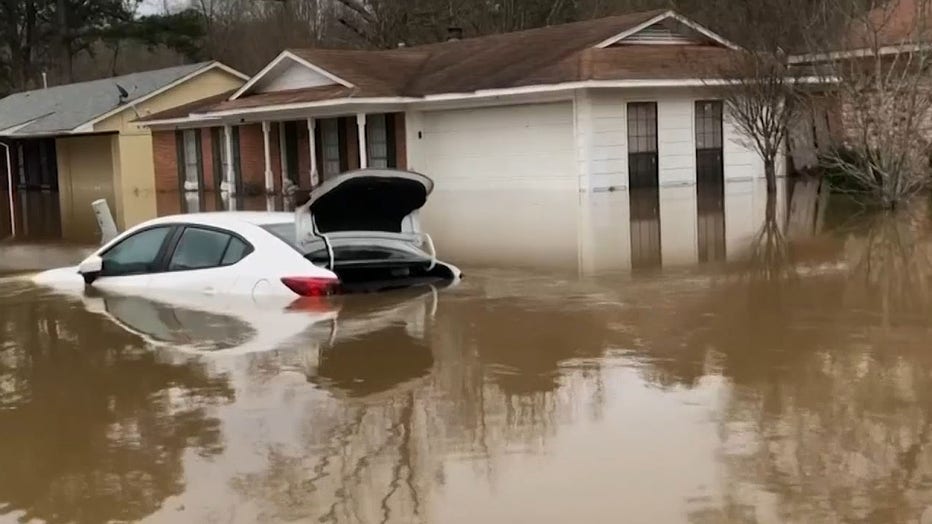 The National Weather Service said rainfall amounts of up to 2 inches — with higher amounts possible in some spots — were expected to fall in a short amount of time in central Mississippi on Tuesday.

Forecasters say that could cause flash flooding and worsen ongoing river flooding in the region.

The National Weather Prediction Center in College Park, Maryland, is projecting the greatest likelihood of heavy rains in a band from eastern Louisiana across central parts of Mississippi and Alabama and into far west Georgia.

In Mississippi's capital city of Jackson, authorities warned hundreds of residents not to return home after devastating flooding Monday until they got the all clear. As the high water recedes, officials expect to find damaged roads and problems with water and sewage pipes.

A near-record rainy winter has forced authorities to release water from swollen reservoirs, potentially worsening the flooding for those living downstream.

In the Savannah, Tennessee, area, two houses slid down a muddy bluff just below the Pickwick Dam as the Tennessee Valley Authority was releasing more than 2.5 million gallons per second, adding to the anguish for owners of about 75 flooded properties downstream.

Hardin County Fire Chief and Emergency Management Director Melvin Martin said the landslide claimed not only two houses on Saturday after their residents got out safely. About 100 yards of the blufftop road also has collapsed. Meanwhile, most of the homes whose ground floors have been under water down by the river are vacation homes that were built on stilts, Martin said.

Boat captain Sam Evans, who lives in a historic riverboat on Pickwick Lake, says it's among the worst floods he's seen. From his vantage point navigating the Tennessee River by boat, he's watched the river banks gradually erode. He said it was only a matter of time before the bluff gave way.

"It has slowly been eroding and it finally let go," Evans told The Associated Press on Tuesday.

The area suffered a devastating flood in 2003, but then about 14 years passed without a catastrophe, and developers got busy selling riverfront properties, Evans said. He thinks the buyers weren't fully aware of the danger.

"Out-of-towners came in that didn’t do their homework," he said. “Here comes a flood and it wipes them out... Buyer-beware when you buy below the dam.”

Things changed about three years ago, he said.

"We've had three floods in the last three years, about the same time every year," Evans said.