Despite President Donald Trump’s “law and order” approach to demonstrations over the death of George Floyd, Republicans in Congress are quickly, if quietly, trying to craft legislation to change police practices and accountability following the deaths of black Americans at the hands of law enforcement.

GOP senators, who risk losing control of the chamber in this fall's election, are distancing themselves from the tone and substance of Trump's response as they step gingerly into a topic many have long avoided as the “Black Lives Matter” movement gains support.

“I think we should all be optimistic right now," Scott, the only black GOP senator, told reporters at the Capitol. "We have no reason not to be.”

The burst of legislative activity in the Republican ranks — GOP leadership named Scott to lead a working group — is an abrupt turnaround. It comes as Trump lashes out at activists who want to “defund the police” while Democrats, powered by the Congressional Black Caucus, have unveiled the most sweeping police overhaul in years. House leadership announced it is recalling lawmakers back to Washington this month for a vote. 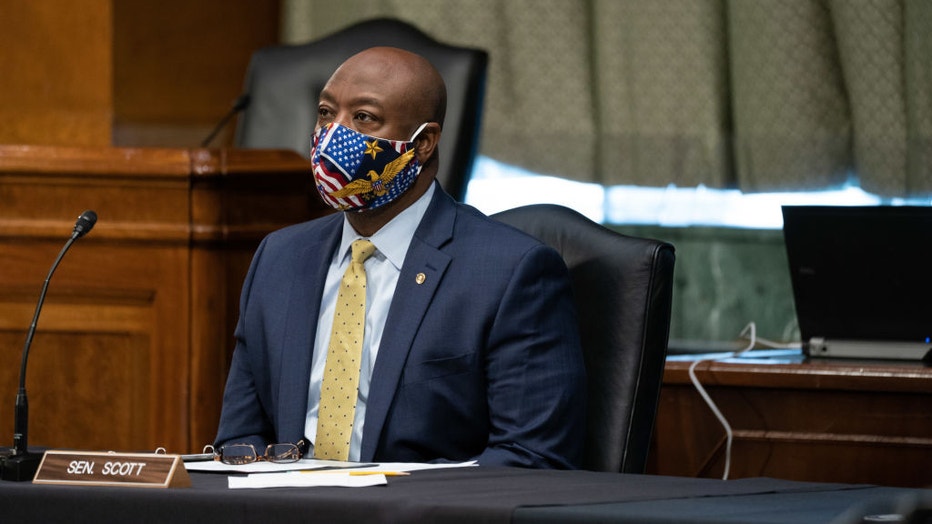 Lawmakers are watching as demonstrations erupt in all corners of the country, from the biggest cities to the smallest towns, and acknowledging the arrival of a mass movement for law enforcement changes as politically impossible to ignore.

Notably, Senate Majority Leader Mitch McConnell, whose state faced unrest following the death of Breonna Taylor after police used a no-knock warrant to enter her Louisville home, tried to strike a different tone for the party.

McConnell said the country is still "wrestling with America’s original sin,” a reference to slavery.

The GOP leader, who is running for reelection alongside Trump, acknowledged the Republican majority — in stark contrast to Democrats in Congress — is almost all white.

“None of us have had the experience of being an African American in this country and dealing with this discrimination, which persists here some 50 years after the 1964 Civil Rights bill,” McConnell said.

“The best way for Senate Republicans to go forward on this is to listen to one of our own, whose had these experiences,” he said in tapping Scott to speak for the GOP senators. “With his guidance and leadership we're going to come together with a proposal that we think makes the most sense.”

Wary Democrats warn that the flurry of legislative activity could go the way of gun violence legislation in the aftermath of mass shootings — a quick response with no tangible outcome.

With the House set to pass its package mid-month, Schumer pressed McConnell for Senate action before the July 4 holiday recess.

Leading Republicans, with backing from the White House, are signaling a willingness to consider a more streamlined set of proposals, including some from the House package.

Several key Republicans, including Sen. Chuck Grassley of Iowa, are backing Scott's proposal, the Walter Scott Notification Act, first introduced in 2015 named for the black man shot and killed after fleeing police in South Carolina who pulled him over for a faulty brake light. It also has support from Sen. Joni Ernst, who is up for reelection this fall in Iowa, and Sen. James Lankford, R-Okla.

Lankford also spoke Monday about the need for police body cameras and Paul's suggestions for ending the transfer of military hardware and doing away with “qualified immunity” protections in damage lawsuits against police — all provisions Democrats have included in their bill.

“Obviously this is a national awakening,” GOP Sen. Shelley Moore Capito of West Virginia, a member of the new working group, said Tuesday on CNBC.

The idea for a police registry could provide common ground as something Democrats and Republicans see as a way to provide public transparency, so police officers cannot easily transfer from one department to another without awareness of their past actions.

“We are going to definitely come forward with a package — you saw the Democrats come forward yesterday with one," Capito said. "This is something we can work on together.”

The chairman of the Judiciary Committee, Sen. Lindsey Graham, R-S.C., announced a hearing next Tuesday on police practices and accountability.

Graham said he spoke to Trump and the president “wants to do something.”

RELATED: When protesters cry 'defund the police,' what does it mean?

In the House, GOP Leader Kevin McCarthy, who has been allied with Scott in the past, has also expressed an interest in considering potential legislation.

Another member of the new working group, Sen. John Cornyn, R-Texas, has suggested, with Democratic Sen. Gary Peters of Michigan, creating a “National Criminal Justice Commission," much like the 9/11 Commission in the aftermath of the 2001 terror attacks, to broadly review policing and sentencing issues.

The Democrats' proposal is much a more sweeping overhaul of policing. Along with the national database, it would ban racial profiling and choke holds, among other changes, and make it easier for those injured by law enforcement to directly sue police officers by ending so-called “qualified immunity.”