Matt Morgan was a TNA Wrestling Tag Team Champion, an American Gladiator and even a WWE main eventer, sharing the ring with the likes of Kurt Angle and Brock Lesner.

"Yeah, it's a little mind-blowing,” Morgan said, looking at his first WWE action figure displayed proudly on his mantle. "To go from a little kid playing with these to one day when they make your first one. If anyone says it's not mind-blowing, they're lying and they're trying to act too cool for school."

Morgan’s Longwood home is filled with pictures and memories from his decades as a pro wrestler performing for crowds around the world.

However, the memorabilia is now joined by a growing number of speaker’s badges from major political events, pictures from ribbon-cutting ceremonies and a certificate of election proudly displayed right at the center of all of it.

Morgan’s new spotlight is his biggest one yet, according to him - being mayor of the town he calls home in Longwood.

"That's a question you're always asked, 'How in the world do you go from being a professional wrestler into being interested in politics?'” Morgan said.

The now Longwood mayor said he really never was into politics, at least not when he was wrestling. 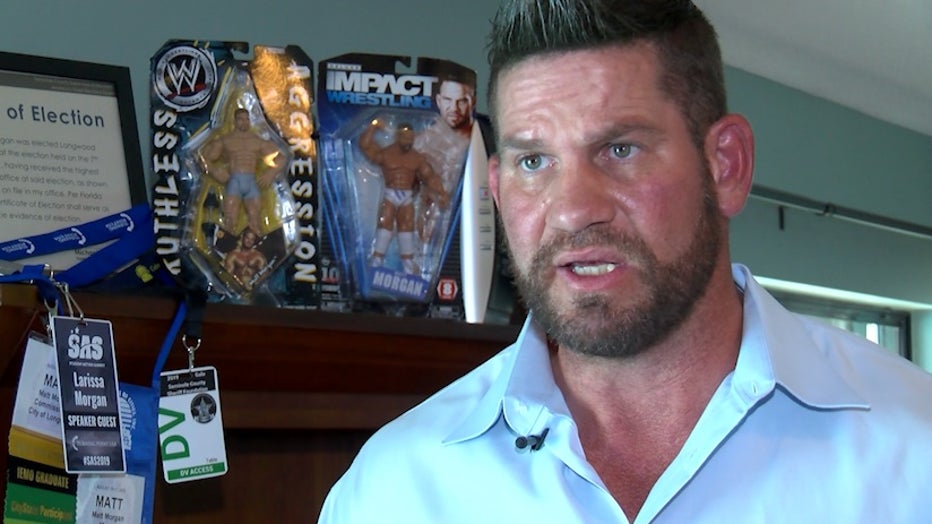 He said life started to take a new shape for him in 2014 when, after 11 years of being told they couldn’t conceive, his wife Larissa finally got pregnant and the couple became parents.

"We were in the delivery room,” Morgan said. “Jackson Morgan, my son, was born and the minute that guy was in my hands, it was game over for me."

Morgan retired from full-time wrestling. He's now focused on being a dad.

In his retirement from the ring, Morgan said he quickly found it wasn’t the lights or the action that he missed the most, it was another part of the job that many look past.

"The thing that I think I miss the most when I look back on my wrestling career is the charity portion of being on the road and going to give kids motivational speeches in their schools. You're a role model! Those kids look at you like a comic book hero or comic book villain depending on your character,” he said.

So, Morgan began looking at his own community around him for opportunities to start filling that role model role again to create a better future his son and other kids like him.

That took him to Longwood City Hall.

Morgan said he started to tune in for city commission meetings and started learning about the important issues facing his community and his neighbors.

"Then you really start to pull the curtain back within your own hometown. Who makes the decisions here?" he said.

With many in the community encouraging him to use his pro wrestling star-power and run, Morgan launched his first city commissioner campaign during the 2017 election and was elected in November of that year.

Less than two years later, Morgan was being sworn in as the new mayor of Longwood.

In his short time in office, the retired wrestler’s influence and change on the city couldn’t be clearer.

Morgan has helped bring new businesses to town, helped expand the parks and build a BMX park, and opened up transparency by expanding the city’s social media presence.

"That's the way I look at it is my job is nothing more, nothing less than being a true conduit, a 7-foot 300-pound megaphone, a voice for the voiceless,” Morgan said.

He said his biggest personal accomplishment is changing the city’s image from a small, often driven-through town in Seminole County to one that draws thousands in for events, one that’s talked about with admiration.

"I want all our residents to be emotionally invested, especially our kids," Morgan said. "It used to be they wouldn't say, 'Yeah, I'm from Longwood.’ Well, now they are! They are, they're calling it Strongwood."

Obviously, Morgan isn’t the only WWE Superstar to find a life in politics after stepping out of the ring.

Legend Jesse Ventura served as the Governor of Minnesota, B. Brian Blair served on the county commission in Hillsborough County, and most recently Morgan’s friend Glenn “Kane” Jacobs was elected Mayor of Knox County, Tennessee.

As for why the grapplers of the squared circle take their talents to politics, Morgan believes it’s got a lot to do with emotional investment.

Pro wrestlers have to get the fans to care, listen to the crowd and play off of them in order to give them the show they’re paying to see.

He said his job as mayor is just listening to his constituents and representing their wants in the same way, working for them just like he worked for the crowd.

Morgan said he’s glad to use his to keep lifting up the city he loves, the city that now is his ‘main event.’

He said he still gets asked all the time if a return to the ring is in the cards.

"I'll tell them when they say that to me, 'Guys, what I'm doing now is 10 times more important,'” Morgan said. “Not to take away from any professional wrestler, what they do is really, really cool and they are role models, but I'll argue that it's what you do with it once you leave that can be even more telling and be even bigger."

Not that he couldn’t do it physically.

Morgan is still 7 feet tall and keeping in athletic shape.

"The Blueprint" is still very much around, it’s just "Mayor Blueprint" now.