A dog named "Rocky" is recovering at a veterinary hospital in Florida after he was shot in the head and left in his kennel without care or treatment, according to the Flagler County Sheriff's Office.

FLAGLER COUNTY, Fla. - A dog named "Rocky" is recovering at a veterinary hospital in Florida after he was shot in the head and left in his kennel without care or treatment, according to the Flagler County Sheriff's Office.

The 25-year-old man who allegedly shot the dog is being held in jail under suspicion of felony animal abuse.

Good news first: Rocky is "doing well and expected to make a full recovery," according to a news release from the sheriff's office.

Deputies were called to a home in Palm Coast on Saturday after receiving multiple 911 calls from people who reported hearing gunshots, followed by dogs "barking and crying" in the Seminole Woods neighborhood, according to the case narrative.

At the home, deputies found four people who claimed to not know why authorities were there. One of them, identified as Jamier Lee-Bright, appeared to be sweating and had blood on his face, according to authorities. 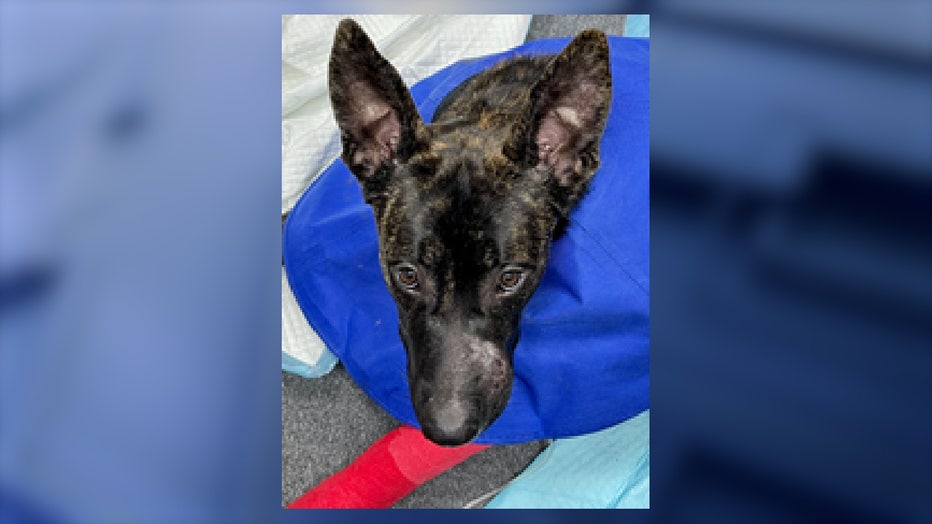 A deputy asked to see the backyard and was given the OK. However, Lee-Bright said wanted to "make sure the other dogs were put away first," according to the report.

A deputy then reported seeing Lee-Bright hosing off a lanai and appeared to have bleach near him. There was also a hole that appeared to be freshly dug in the yard, according to the report. Lee-Bright apparently stopped when he noticed the deputy watching him.

Lee-Bright eventually told deputies that he was awakened Saturday morning to someone screaming at the dog because it had bitten them. Lee-Bright took the dog outside, shot the dog once in the head, and dragged the dog back inside and put it in its kennel, the sheriff's office said. He then allegedly tried to clean up the bloody patio without anyone knowing.

Deputies found the dog "visibly in pain" inside its kennel and transported it to Flagler Animal Hospital. It's believed that the dog was in the kennel for more than two hours.

Lee-Bright was arrested Monday under suspicion of felony cruelty to animals and tampering with physical evidence. He's being held on a $7,500 bond.