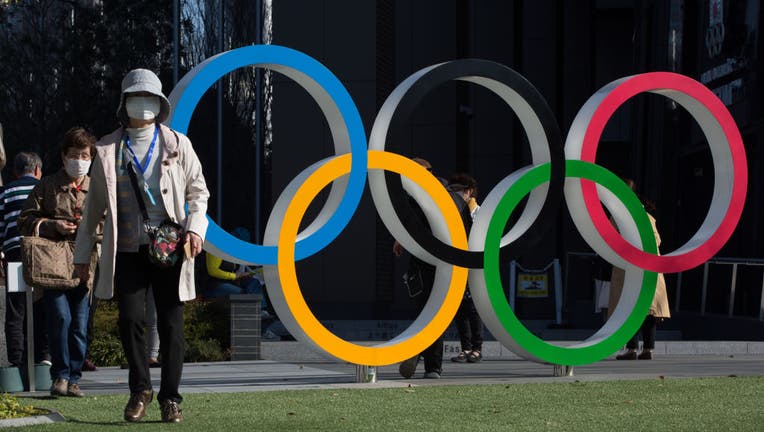 Women with surgical masks walk next to the Olympic Rings in front of the Japan Olympic Museum in Shinjuku. (Photo by Stanislav Kogiku/SOPA Images/LightRocket via Getty Images) Japanese start thinking that it would be the best to postpone the Tokyo 20

TALLAHASSEE, Fla. - The state of Florida's chief financial officer is encouraging the International Olympic Committee to consider relocating the 2021 Olympics from Tokyo, Japan to Florida.

CFO Jimmy Patronis issued a letter to the committee, citing "recent media reports [that] have stated that leaders in Japan have 'privately' concluded that they are too concerned about the pandemic for the 2021 Olympics to take place."

RELATED: 'I've never heard such a thing': Tokyo officials deny reports that Olympics will be canceled

However, the IOC is pushing back on rumors that the games will be canceled.

"We have at this moment, no reason whatsoever to believe that the Olympic Games in Tokyo will not open on the 23rd of July in the Olympic stadium in Tokyo," Thomas Bach, the president of the IOC, told the Japanese news agency Kyodo on Thursday. He also said there is "no Plan B."

But that did not deter Patronis from suggesting Florida as that Plan B option.

Patronis' letter says Florida has allowed sports to take place amid the COVID-19 pandemic, pointing to the NBA's "bubble" where basketball games were held in Orlando. He added that tourist destinations including Disney World have been open and operating in the Sunshine State, calling Disney an "incredible model for how to run a complex organization in the midst of COVID-19."

Read the Patronis' full letter to the IOC below:

I am writing to you as the Chief Financial Officer (CFO) for the State of Florida.  As a member of the Florida Cabinet, I sit on the Enterprise Florida Inc. Board of Directors, which is our state’s business development unit. Today, I am writing to encourage you to consider relocating the 2021 Olympics from Tokyo, Japan to the United States of America, and more specifically to Florida.

With media reports of leaders in Japan "privately" concluding that they are too concerned about the pandemic for the 2021 Olympics to take place, there is still time to deploy a site selection team to Florida to meet with statewide and local officials on holding the Olympics in the Sunshine State. I would welcome the opportunity to pitch Florida and help you make the right contacts to get this done.

Prior to the pandemic, Florida was welcoming 900 people per day to our state, and in the past few years overtook the State of New York for total population. When most of the major states were shutting down their economies, we were fortunate enough to have a Governor that recognized the important balance of fighting the virus with keeping the economy open. Moreover, Governor DeSantis has partnered with the private sector to rapidly distribute vaccines to our most vulnerable populations. Unlike other states, when the COVID-19 vaccine comes to Florida it doesn’t just sit on the shelf wrapped in government red tape; it moves fast to protect our communities.

The State of Florida has successfully allowed sports to take place during the pandemic. When most states shut down their sporting events, the city of Jacksonville hosted the Ultimate Fighting Championship (the UFC) and the National Basketball Association (NBA) setup the "bubble" to hold games in Orlando. Moreover, during football season the National Football League (NFL) and college teams were able to compete on Florida soil. Additionally, our international tourist destinations, like Disney parks have been open and operating safely in Florida for some time. In fact, Disney serves as an incredible model for how to run a complex organization in the midst of COVID-19.

As a tourism state, Florida welcomed 131 million tourists in 2019. Our state has ample hotel capacity and well-maintained transportation networks to accommodate the kind of infrastructure required for a major undertaking of this sort. Florida has 20 commercial airports, 31 urban transit systems, 12 major universities that have existing sporting facilities – and we have world-renowned health care facilities in each of our regions. I think most importantly, however, we have a state with leaders who are willing to get this done.

Although I write to you in a professional capacity, I should also add that I am a father of two boys who love sports, and the idea of cancelling the Olympics when there have been so many athletes who have worked so hard for this opportunity is a tough pill to swallow. I’ve always believed that sports and competition makes our world a better place, and these athletes demonstrate to children around the world that when you work hard, and put your mind to something, anything is possible.

Whatever precautions are required let’s figure it out and get it done. Please contact my office at 850-413-4900 to schedule a meeting.