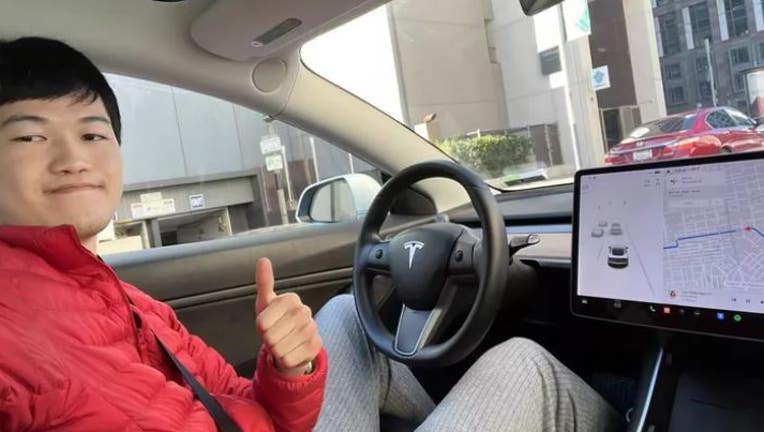 SAN FRANCISCO - The brother of a University of San Francisco student who was found dead in his rented Tesla is now asking for help to bring the young man's family from China and to help pay for funeral expenses.

In a GoFundMe post, Jerry Liang did not state how his brother, Christopher Liang, died, but he did share that his 21-year-old brother had a challenging life and struggled with mental health issues. He did not elaborate.

Christopher had set out on an "erratic" and "impulsive" road trip on Feb. 28, Jerry Liang wrote on Instagram, and his body was found Saturday night in a rented Tesla Model 3, that had crashed on Panoche Road, just west of southbound Interstate 5 in Fresno County. He had set out to visit Irvine, but had broken plans with friends there and had never arrived.

A memorial will take place on Thursday at Saint Ignatius Church in San Francisco.

Jerry Liang wrote that their parents and sister live in China and because of the pandemic, hadn't seen Christopher Liang since 2019.

"In addition to funeral costs, we hope to raise money to reunite our family soon in the United States," Jerry Liang wrote. "The trip will be for my college graduation (delayed until this spring by the pandemic) and my brother’s college graduation, during which I will walk for him."

The money raised would also go for legal fees for estate planning, a casket, a burial and finding a land plot in the Bay Area. The Liangs could also use help in buying three round-trip tickets for his parents and sister, 50 days of lodging, food and transportation in the Bay Area and 30 days of lodging and food in China due to that country's quarantine policy.

Jerry Liang wrote that since his brother set off on the trip, his phone was inaccessible and his social media accounts were inactive. Also, the rented Tesla was taken offline, his brother wrote. The vehicle's last tracked location was a Firebaugh Tesla Supercharger station on Panoche Rd in Firebaugh.

Jerry Liang added that this was the first time his brother had driven since he got his license in March and had never booked a hotel before.

"I'm terrified and heartbroken," Jerry Liang wrote before he knew his brother had died.