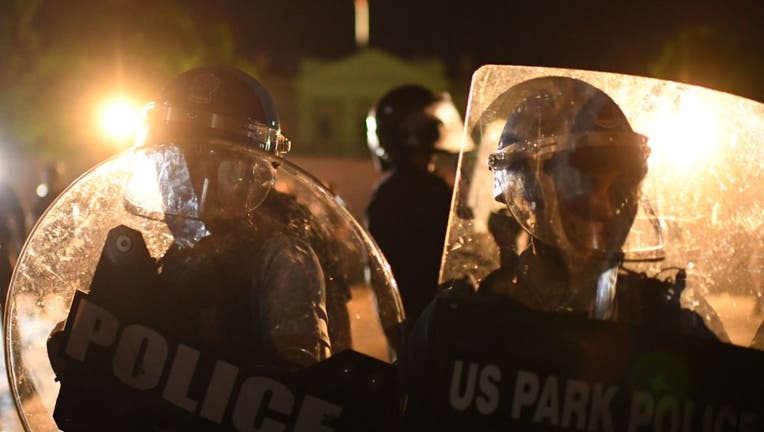 Police officers hold up their shields outside the White House in Washington, DC, early on May 30, 2020 during a demonstration over the death of George Floyd, a black man who died after a white policeman kneeled on his neck for several minutes. (Photo

BURIEN, Wash. (AP) - Seattle officers hold down a protester, and one repeatedly punches him in the face. In another run-in, officers handcuff a looting suspect on the ground, one pressing a knee into his neck — the same tactic used on George Floyd.

The officers were captured on videos appearing to violate policies on how to use force just days after Floyd died at the hands of Minneapolis police, setting off nationwide protests.

With calls for police reforms across the U.S., instructors and researchers say officers lack sufficient training on how and when to use force, leaving them unprepared to handle tense situations. Better training can’t fix all the issues facing the nation’s police departments, but experts believe it would have a big impact.

“The skills are not taught well enough to be retained and now the officer is scrambling to find something that works,” said William Lewinski, executive director at Minnesota-based Force Science Institute, which provides research, training and consulting to law enforcement agencies.

Its two-year study of three large U.S. police academies says skills like using a baton or taking down an aggressive offender deteriorate dramatically within two weeks.

A recent Associated Press investigation found that a lack of firearms training has resulted in unintentional shootings by law enforcement. It’s the same problem with use-of-force techniques, Lewinski said.

The AP was invited to the facility to see use-of-force training, a component of a 2012 federal agreement to reform the Seattle Police Department after officers were found to routinely use excessive force. The academy is considered one of the more progressive in the country for trying to mirror what officers will face on the streets.

There's classroom work, and cadets learn to combine skills by play-acting scenarios. In an old building decorated to look like an apartment, one officer plays the offender and others try to deescalate tensions, take away his weapon and put him in handcuffs.

In a parking lot, officers pair off. One wears padding on their shins and the other practices swinging a baton, hitting low on the legs.

They also learn to arrest someone who’s fighting back. An instructor plays the suspect, with one officer bear-hugging his legs and another wrapping his arms around him to take him to the ground. That officer presses against him chest to chest until he “wears himself out,” instructor Rich Lee said.

Then they flip him over, still holding his legs, with an officer's knee in the center of his back as they handcuff him.

Police in the Seattle videos didn’t use those techniques. No one held the suspects’ legs and one officer had his knee on a suspect's neck until his partner pushed it off.

In Washington state, cadets must complete 720 hours of training, “but those skills start to degrade immediately,” Hendrickson said. Some states only require 400 to 500 hours of academy training and require 24 hours or less of training once they’re on the job. Often, follow-up training is online, not hands-on.

“There’s no profession that trains so little but expects so much,” Lewinski said.

But not all officers can be taught, he acknowledged. When it came to Derek Chauvin, the officer charged in Floyd’s death, “I’m not sure that training would have made a difference,” Lewinski said. “What he did was definitely criminal.”

Protesters are demanding reforms ranging from cutting funding to banning chokeholds. There's been success in some states, such as California, where the governor ordered the police training program to stop teaching a neck hold that blocks blood flowing to the brain.

A measure introduced this week in Congress would limit legal protections for police, create a national database of excessive-force incidents and address training.

Reforming police use-of-force training was a major issue in 2014 and 2015, following the deaths of several black men at the hands of police, including Eric Garner, Michael Brown and others. In New York City, where Garner died, the nation’s largest police department retrained all patrol officers, dismantled how beat cops did their jobs and moved to a community policing model where officers were encouraged get to know their precincts and focus on deescalation.

It looked like police reform was gaining traction nationwide, but as the 2016 election took the spotlight, the effort faded, especially after the Justice Department shifted its civil rights priorities.

Most academies bombard officers with one subject, like communication, and then move to the next topic, like use of force, without integrating those skills, making them easy to forget, Force Science studies say.

An example of successfully using training can be seen in a video of a security guard who took two stolen AR-15's from some young men during the Seattle protests. The guard with military training hired to protect several journalists secured one gun and then calmly walked up to the second suspect, took the firearm out of his hands and unloaded it.

“His movements were very deliberate, even under those stressful circumstances,” Hendrickson said. “When you've done it enough times, that's going to dictate how smooth you're able to take control. He didn't have to think about those skills."

“I’ve been in situations where I’m frantic and the other officer is cool, calm and collected,” he said. “How did they do that without screaming? It all comes back to training. When we lack confidence, a lot of times we raise our voice, start swearing. It's all about fear.”

Jerrell Wills, manager of the applied-skills division at the Washington academy, said racial tension is a reason he wants to improve how officers are taught.

A black man who's been in law enforcement for 30 years, Wills said he's been racially profiled and had people threaten to call the police for no good reason. Now, he worries about his sons.

“That's why the work we do is so important,” Wills said. “Because I care about this industry, my community and my African American community.”