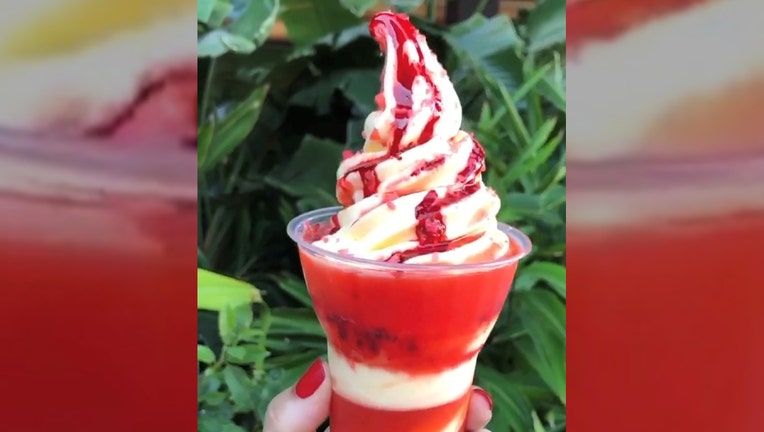 Disney World has debuted a new alcoholic version of its popular Dole Whip treat, much to the delight of fans and foodies who were probably only a few minutes away from smuggling their own rum into the park.

The boozy new beverage can be found at the Pineapple Lanai at Disney World’s Polynesian Resort, where it’s served with a mix of passion fruit, orange and guava juices, as well as a shot of rum on the side, a Disney spokesperson confirmed to Fox News.

To top it all off, the cocktail — called the “Polynesian Lava You” — comes covered with popping candy.

Other alcoholic versions of Disney’s popular Dole Whip treat are available year-round at the walk-up Pineapple Lanai window, Disney confirmed, as well as a Dole Whip Lime Margarita beverage at the Barefoot Pool Bar at the Polynesian Resort, made with lime Dole Whip, tequila, and chili-lime seasoning.

Disney added that the Tamu Tamu refreshments stand at the Animal Kingdom had already hopped on the boozy bandwagon with multiple rum-soaked Dole Whip offerings (a King's Cooler made with Dole Whip, fruit-flavored syrups and rum; as well as two variations each of boozy Dole Whip Pineapple Cups and Dole Whip Pineapple Floats).

NEW Dole Whip Float with pineapple 🍍 whip, POG Juice (!!!), and Coconut 🥥 rum! Find it at the Polynesian in Disney World!

Disney Springs had also previously introduced Dole Whip-based mimosas and Froscatos (made with vodka and Moscato wine) in 2019 at the Wine Bar George. Currently, Marketplace Snacks at Disney Springs offers a Dole Whip Pineapple Float with either spiced rum or coconut rum.

The newest Dole Whip offering currently available at the Pineapple Lanai will set guests back $15.25. A non-alcoholic Dole Whip — a frozen dessert made from pineapple juice — sells at the park for $5.99.

A representative for Disney World was not immediately available to comment.