Disney's second-quarter revenue dropped as the pandemic continued to weigh on its parks and theme parks. However, CEO Bob Chapek said signs of recovery can be seen across the company’s business and capacity will continue to expand.

Disney+ subscriptions continued to surge but missed some analyst expectations. Still, net income beat expectations, and CEO Bob Chapek said signs of recovery can be seen across the company’s business as the pandemic begins to wane.

Chapek also said that the capacity at Walt Disney World is expanding, following Thursday's announcement by the Centers for Disease Control and Prevention (CDC) that it is easing mask-wearing guidance for fully vaccinated people.

Back in July, Disney started reopening its parks with a 25% capacity limit, later raising it to 35%. Although the number was not specified on the earnings call, Disney's CEO says they have raised the capacity again.

"It’s clearly above 50% probably already and maybe getting back closer to 75%," explains Jason Diffendal, who runs the website WDW News Today. "They’re going to have to decrease the social distancing, which is consistent with what the CDC said today because people just aren’t going to fit in the park."

FOX 35 News asked Disney how the company is responding to the CDC's new guidance on mask-wearing.  We received a statement from a Disney spokesperson which read, "Today’s guidance from the CDC allowing fully vaccinated individuals to remove masks and the removal of physical distancing requirements is extremely positive news and as soon as is practical we will implement updated guidelines across our businesses."

In other earnings news, Disney+ subscribers more than doubled from a year ago to 103.6 million subscribers as of April 3. That was lower than the 109.3 million analysts expected, according to FactSet. Chapek said the company is still on track to reach its goal of 230 to 260 million subscribers for Disney+ by 2024. 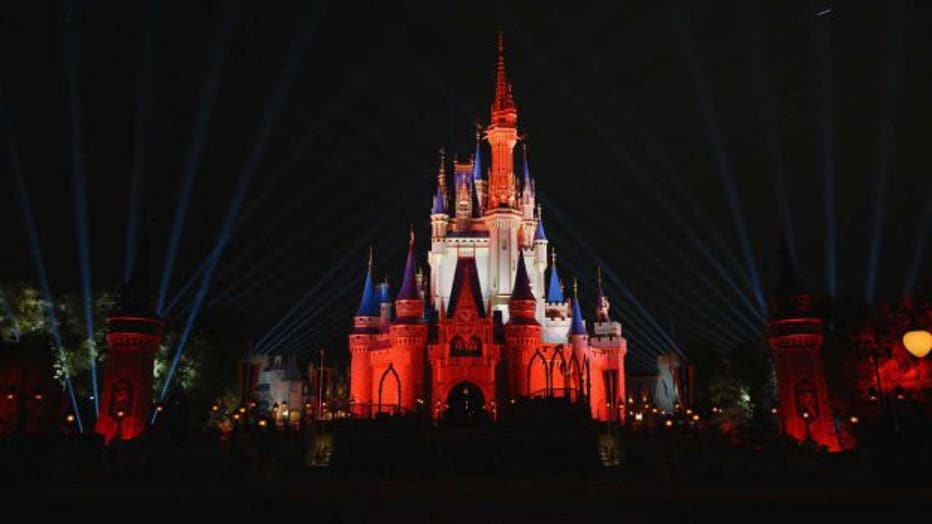 CFO Christine McCarthy said in a call with analysts that growth in subscriber signups was slower during the first two months of the year due to no major product launches and a price increase in the Africa, Middle East, and Asia regions. But she said signups grew more quickly in March.

Net income attributable to Disney for the three months ended April 3 totaled $901 million, or 49 cents per share. Excluding one-time items, net income totaled 79 cents per share. One-time costs were related to closing an animation studio and some Disney-branded retail stores, as well as severance at some parks and resorts. That beat analyst expectations of 26 cents per share, according to FactSet.

The vast library of Disney+, including Disney movies and TV shows plus hit original series like Marvel’s "WandaVision" and the Star Wars spinoff "The Mandalorian," have helped drive signups. People stuck at home during the pandemic over the past year also boosted subscriptions, but that could begin to ease as things open up again.

Revenue per Disney+ customer dropped 29 percent to $3.99. That’s because the figures include Disney’s offering in India, where customers pay less than in other parts of the world.

Revenue from parks dropped 44 percent to $3.17 billion. But parks are beginning to show signs of life after being shuttered during most of the pandemic. Disneyland in Anaheim, California, reopened on April 30, after the quarter ended. Disney World in Orlando and other parks around the world were open during the quarter, although at reduced capacity.

Movie theaters shuttered during the pandemic have also begun to reopen since late March. Disney plans to release "Cruella," a live-action movie about the villain in "101 Dalmations," starring Emma Stone, in theaters on May 28. It will release Marvel’s "Black Widow" starring Scarlett Johansson in July. Both will also be offered on Disney+ at the time of release for $30.