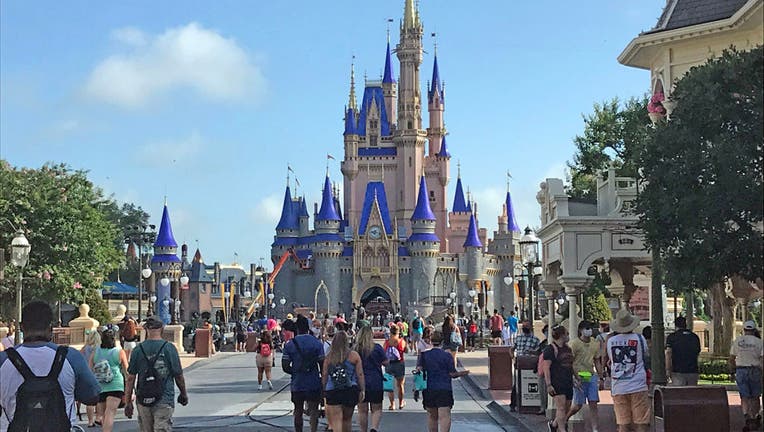 Disney annual passholders get a peek at the coronavirus-inspired changes inside the Magic Kingdom on July 9, 2020. (Gabrielle Russon/Orlando Sentinel/Tribune News Service via Getty Images)

LAKE MARY, Fla. - Disney says after listening to feedback from its passholders, they are tweaking a few policies that have restricted how and when guests can visit certain theme parks at Walt Disney World Resort.

Walt Disney World passholders will soon be able to visit the theme parks after 2 p.m. without needing a park reservation, the exception being on Saturdays and Sundays at the Magic Kingdom. Pass blackout dates will continue to apply, the company said. Disney did not specify a date for when they will begin relaxing reservations, only stating that it would happen "in the next few months."

The reservation system was put in place after the parks reopened following the outbreak of the COVID-19 pandemic in 2020, at which time guests had to designate a specific date and park for their visits to Walt Disney World.

Another big change will impact guests at Disney Resort hotels. Starting immediately, Disney said it is reinstating complimentary self-parking for hotel guests, a reversal of a pre-pandemic policy.

Also, beginning in the next few months, guests purchasing the Disney Genie+ service will also receive digital downloads of their Disney PhotoPass attraction photos taken in the park on the day of their purchase, at no additional charge. An exact launch date will be announced at a later time, Disney said.

D’Amaro added that Disney is committed to providing a wide range of options for Florida residents to visit the parks and the company will offer special deals from time to time.

All of these updates are specific to Walt Disney World Resort in Florida. Visit DisneyWorld.com/Offers for more details.

"Please know we will keep listening to you and adapting as we focus on making the guest experience even better for more people who visit us here at The Most Magical Place on Earth," D’Amaro said.