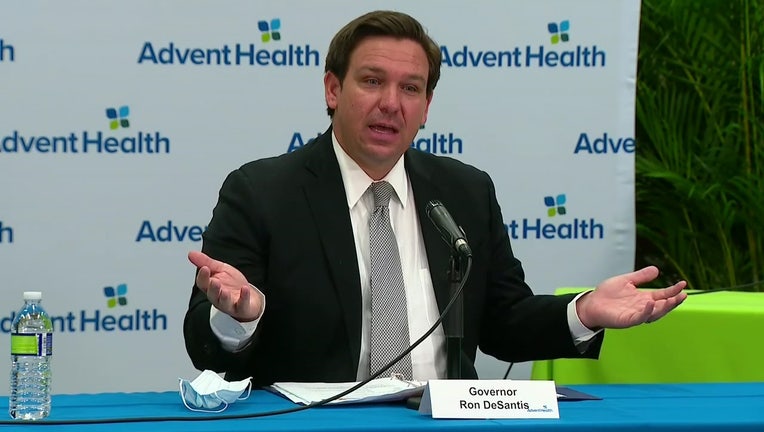 THE VILLAGES, Fla. - Gov. Ron DeSantis said Monday that Florida will not impose the stringent lockdowns the state saw earlier this year.

"We will never do any of these lockdowns again, and I hear people say they'll shut down the country, and honestly I cringe," DeSantis said during a press conference at The Villages retirement community.

Before his visit to The Villages, DeSantis held a panel discussion in Tallahassee with President Donald Trump’s new pandemic adviser, Dr. Scott Atlas, who noted that infections and deaths are declining in the hardest-hit states.

“The American public should feel cautiously optimistic here about what’s going on,” Atlas said. “There is no need for fear at this point.”

Atlas downplayed the risk of infections in young people, saying activities like college football needed to be reopened because communities depended on them economically.

“This shouldn’t really be a point of controversy. College football should be open. It can be done safely,” Atlas said. “College sports is a big part of America and it’s a big part of the economic engine.”

Atlas also questioned the need to test people for coronavirus who do not have symptoms.

DeSantis said he’s looking at reopening bars and nightclubs and wants the three South Florida counties – Palm Beach, Broward and Miami-Dade – to join the rest of the state in reopening businesses.

“Everything’s open except the nightclubs and the pubs, and that’s something we’re going to address,” DeSantis said. “We’re going to work on our three southern Florida counties, getting them where we are. And that’s really the last piece of the puzzle.”

Last week, DeSantis made the case that tourists could safely take commercial flights to visit Florida.

Speaking with industry executives at an airline travel forum in Fort Lauderdale on Friday, DeSantis said he hadn't heard of any airline passenger catching the virus on a plane.

“When this industry thrives, it provides this economic security for so many people in the state of Florida," DeSantis said.

Airlines and airport executives told DeSantis that the virus was having the biggest impact on international travel to Florida since many countries had implemented travel restrictions and quarantines on people traveling to and from the United States.

Related: Another warning: University of Tampa asks law enforcement for help after weekend of off-campus parties

DeSantis said 8.8 million people traveled from March to June in Florida, down from 24 million during the same period a year earlier.

Travel in Florida accounts for 934,000 jobs and $102 billion in spending, second in the nation behind California, according to the U.S. Travel Association.