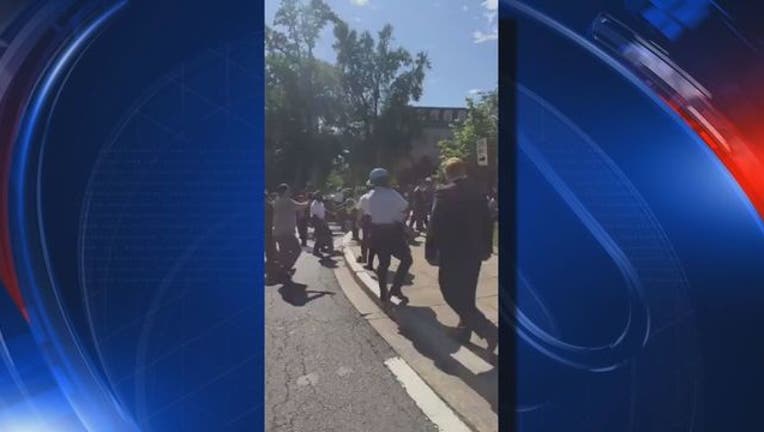 WASHINGTON - DC police continue to search for additional suspects in connection to an attack on what appeared to have been a peaceful protest outside the Turkish ambassador's residence in northwest DC on Tuesday afternoon.

The incident happened around 4 pm outside the Turkish Embassy on Sheridan Circle NW near Massachusetts Avenue NW. Earlier in the day, President Donald Trump met with Turkish President Recep Tayyip Erdogan at the White House.

A total of 11 people were transported to the hospital as a result of the the altercation, but all of them have been released, according to DC Police Chief Peter Newsham.

DC police arrested two people at the scene. Ayten Necmi, 49, of Woodside, N.Y. is charged with aggravated assault, and Jalal Kheirabaoi, 42, of Fairfax, Va. is charged with assault on a police officer (simple assault).

At a news conference Wednesday, Newsham said the attack was brutal, according to what is shown on the video shot by witnesses, and appeared to be unprovoked. It appeared to be a peaceful protest, but two opposing groups were in attendance.

Chief Newsham said there is a lot of good video showing the incident, and investigators have a good idea of who the people at the scene were. He said they're comfortable that they will be able to identify most of those who were involved in the attack. They're asking anyone with additional information on the attack to contact the Metropolitan Police Department.

Newsham went on to say that attacks such as these will not be tolerated in a city where people should be allowed to protest peacefully. He also apologized by the traffic mess that was caused by the presence of emergency vehicles and authorities responding to the scene. Roads had to be shut down, tying up traffic in the rush hour.

On Wednesday, the United States Secret Service released the following statement about the incident:

"One of the missions of the Secret Service is to provide protection to world leaders during their visits to the United States. This mission could not be accomplished successfully without the partnership and cooperation of the Metropolitan Police Department (MPD) and our other partners in the National Capital Region.

The Secret Service fully respects individuals First Amendment Right to free speech and the right to peacefully protest.  We will continue to work with our partners at MPD and the State Department to aggressively pursue accountability for those involved in yesterday’s protests."

In a statement released Wednesday morning, DC Mayor Muriel Bowser condemned what she called a violent attack on a peaceful protest.

“What we saw yesterday – a violent attack on a peaceful demonstration – is an affront to DC values and our rights as Americans," Bowser said. "I strongly condemn these actions and have been briefed by Chief Newsham on our response. The Metropolitan Police Department will continue investigating the incident and will work with federal partners to ensure justice is served.”