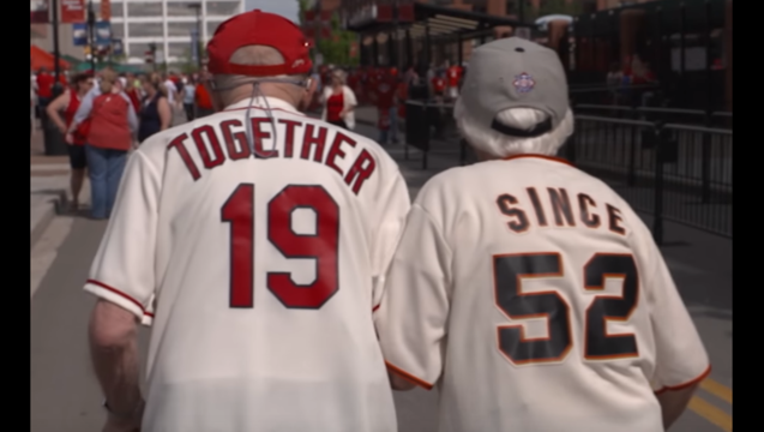 ST. LOUIS (KTVU) - For Carol and Warren Reckmeyer, there may have been no better way to mark their 64th wedding anniversary, than with a special baseball game celebration.

Carol, a long-time Giants fan and Warren, a devoted Cardinals fan, were recently chosen to throw out a ceremonial first pitch at a Giants-Cardinals game at Busch Stadium.

To make it equal, Warren tossed the ball to Cardinals manager Mike Matheny and Carol, leaning on a cane in one hand, threw the ball to Giants manager Bruce Bochy.

In a new video featuring the two fans, Warren and Carol introduce themselves and say in unison, "We've been together since 1952!"

The two continue by sharing their earliest baseball memories, naming some all time greats, including Carl Hubbell and Pepper Martin.

The baseball loving couple showed up to the game in coordinating jerseys.

Warren wore a St. Louis jersey with “Together 19” on the back and Carol's Giants jersey completed the phrase with “Since 52.”

The video of the two is posted on the Giant's Instagram page, with many followers commenting on what an inspirational couple the two are.

Bank of America coordinated the Reckmeyer's special day at the ballpark as part of its #MLBmemorybank program.