ARLINGTON, Texas - The Atlanta Braves failed to advance to the World Series Sunday night after losing the to the Los Angeles Dodgers in Game 7 of the NLCS. 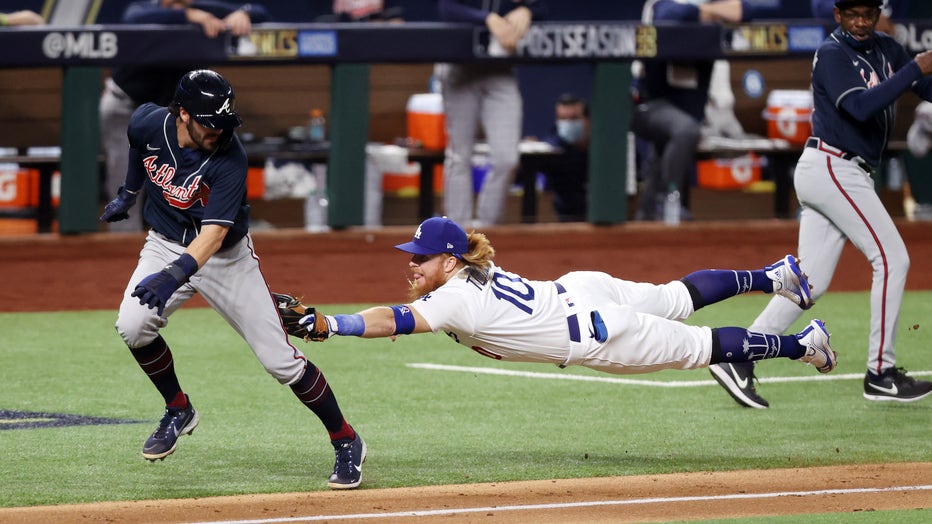 ARLINGTON, TEXAS - OCTOBER 18: Dansby Swanson #7 of the Atlanta Braves is tagged out by Justin Turner #10 of the Los Angeles Dodgers in a rundown between third base and home plate during the fourth inning in Game Seven of the National League Champion

Cody Bellinger hit a tiebreaking solo homer in the seventh inning and the Los Angeles Dodgers advanced to the World Series for the third time in four years by topping the Atlanta Braves 4-3 in Game 7 of the NL Championship Series on Sunday night.

Bellinger connected an inning after Kiké Hernández became the first pinch hitter with a game-tying or go-ahead homer in a winner-take-all-game. His homer tied it at 3 and, like Bellinger’s, came on the eighth pitch of the at-bat.

The Braves had previously announced that Ian Anderson, the 22-year-old right-hander who had pitched 15 2-3 scoreless innings in his first three postseason starts, would start.

Anderson pitched 3 innings, giving up 2 earned runs and striking out 2 hitters. Chris Martin, who gave up to the 7th inning home run to Cody Bellinger, earned the loss. 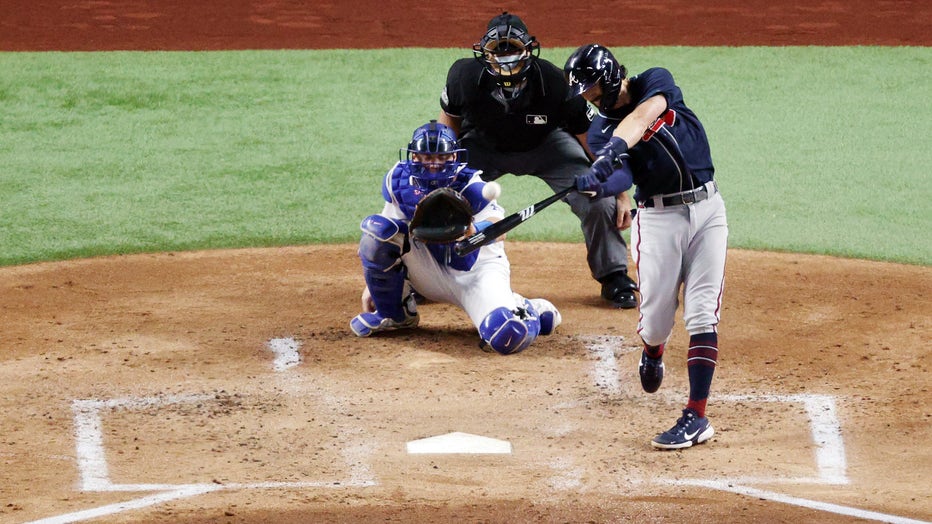 ARLINGTON, TEXAS - OCTOBER 18: Dansby Swanson #7 of the Atlanta Braves hits a solo home run against the Los Angeles Dodgers during the second inning in Game Seven of the National League Championship Series at Globe Life Field on October 18, 2020 in A

The Dodgers, who matched an NLCS record with 16 homers, overcame a 3-1 series deficit by winning three consecutive games when facing elimination for only the second time in their history.

Tampa Bay’s win in Game 7 of the ALCS late Saturday night wiped out the chance for an October rematch with the Astros, whose 2017 World Series victory over the Dodgers has been heavily tarnished by the revelations of Houston’s sign-stealing tactics that season.

The Dodgers get to stay in place for the World Series. Game 1 against the American League champion Tampa Bay Rays is Tuesday night at Globe Life Field.

Advertising: Enter the NLCS Challenge contest on the FOX Super 6 app for free and you can win the $25,000 jackpot! Download now!"