Body of missing man found in dinosaur statue in Spain

A father and son discovered the body after noticing a rank smell emanating from the dinosaur statue.

BARCELONA, Spain - A father and son accidentally found the decomposing remains of a missing man inside of a paper-mâché dinosaur statue in Barcelona, Spain, the BBC reported.

The father and son, who have not been identified, noticed a rank scent emanating from a stegosaurus statue while out in Santa Coloma de Gramenet, a suburb of Barcelona, on May 22.

When the father went to investigate, he could see a body through a crack in the statue’s leg, according to the BBC. 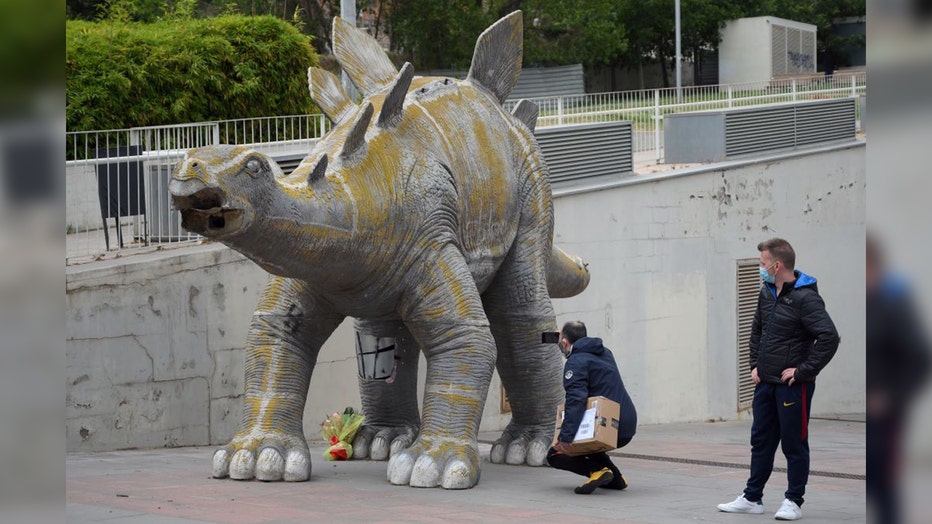 FILE - A man takes a picture of a large statue of a dinosaur on May 25, 2021 in Santa Coloma de Gramenet near Barcelona, where a man died after becoming trapped inside the statue.

RELATED: Woman wakes up to blood dripping on her from apartment ceiling fan

Police confirmed the man, who was 39, had been reported missing by family just a few hours prior to his disappearance.

Firefighters had to cut the statue open in order to retrieve the body.

The man found inside the statue, who has not been identified, had allegedly attempted to retrieve his phone he dropped in the statue when he fell inside and became trapped upside down, the BBC said.

Police have yet to confirm what the cause of death was and are awaiting an autopsy report but have said no foul play was suspected, according to The Guardian.