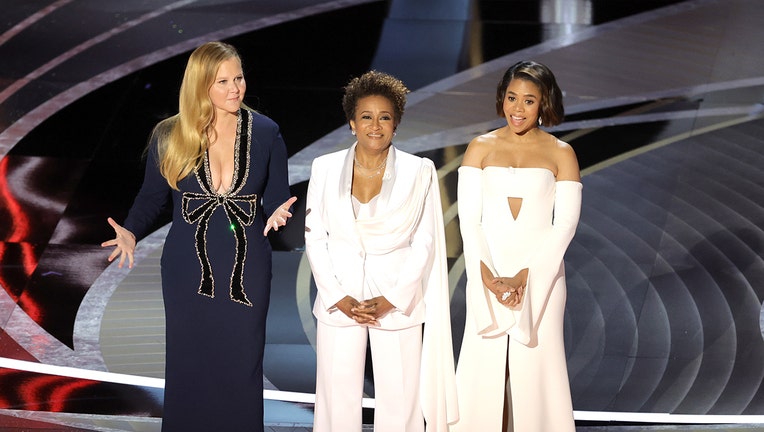 The co-hosts of the 94th Academy Awards took aim at Florida's Parents Rights in Education Act, which critics have dubbed the "Don't Say Gay" bill.

The first political salvo of Sunday night’s Academy Awards in Los Angeles came in the opening monologue, when Wanda Sykes — one of the trio of hosts for the show — took a thinly veiled jab at Florida’s so-called "Don’t Say Gay" bill that passed a Republican-controlled state legislature earlier this month.

She and fellow hosts Amy Schumer and Regina Hall then repeated the word "gay" multiple times, as many in the crowd such as Denzel Washington and Nicole Kidman smiled and applauded in delight.

The bill, which passed earlier this month and has been staunchly defended by Gov. Ron DeSantis, forbids instruction on sexual orientation and gender identity in kindergarten through third grade. Its passing by Florida lawmakers rejected an onslaught of criticism from Democrats that it marginalizes LGBTQ people.

Florida lawmakers withdrew a proposed amendment to an education bill that would have forced educators to inform parents of their child's sexual orientation if the child identified themselves as anything other than straight. The withdrawal came just before the amendment was set to be discussed in the House Tuesday.

It has been loudly opposed by LGBTQ advocates, the White House and many within the entertainment industry.

The shot at the Florida bill wasn’t the only political jab the hosts took in their opening monologue.

"This year we saw a frightening display of how toxic masculinity turns into cruelty towards women and children," Hall said.

Hall said she was merely setting up a line about Oscar-nominated "The Power of the Dog."

And they didn’t just target politics as joke subjects to open the show: The trio also made light of the controversial decision to have eight Oscars presented before the show, basketball star LeBron James’ hairline and even the Golden Globes.