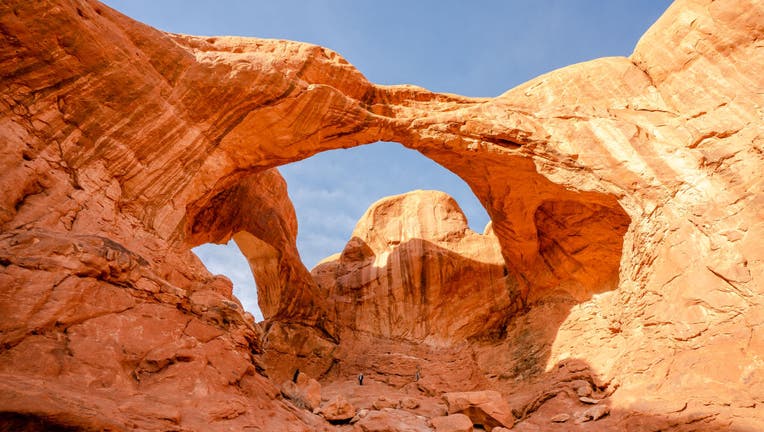 SALT LAKE CITY - A Utah national park famed for its otherworldly sandstone arches will require visitors to get timed entry tickets during its high season next year, the second Utah park to implement such a system as visitation swells.

Arches National Park officials said Friday they’re not trying to decrease the number of visitors during the six-month period, but rather spread them out over the course of the day. The announcement came a week after nearby Zion National Park said it would require reservations to hike the famed cliffside Angels Landing trail.

At Arches, visitation skyrocketed 66% over the last decade, and is on track to break another record this year with nearly 1.7 million visitors as of the end of October, said park spokesperson Kait Thomas. At times, Arches has gotten so crowded officials have had to close the gates for hours at a time to delay entry.

Residents of Alaska’s Denali Borough were treated to a dazzling nighttime light show on November 3 as the aurora borealis, also known as the northern lights, became more visible at northern latitudes. (Credit: @whatsmyname515 via Storyful)

Tickets will be available for a total of 2,700 vehicles per day, about the average number on a busy day in 2019, she said.

The system will only be in place between April and October next year, and tickets are only required from 6 a.m. to 5 p.m. People can enter without a ticket outside those hours and months.

Reservations can be booked on a first-come, first-served basis on the website recreation.gov starting Jan. 3. Each ticket costs $2 and will allow people to enter within a one-hour window. The program is considered a temporary pilot and may change as needed after the rollout. Users can get one ticket per transaction as late as the day before their planned visit, and the online system will include safeguards against bot reservations, Thomas said.

Arches is located in southern Utah and known for its sandstone arches, the most famous of which is Delicate Arch, a soaring formation that’s featured on many Utah signs and license plates.