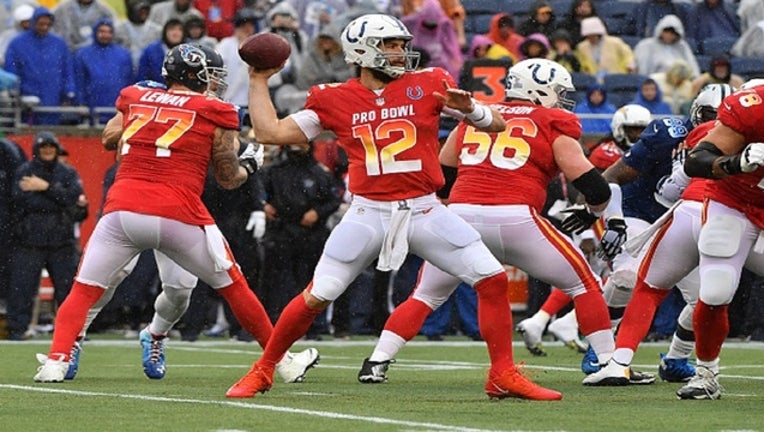 ORLANDO, FL - JANUARY 27: Andrew Luck #12 of the Indianapolis Colts drops back to pass in the second quarter during the 2019 NFL Pro Bowl at Camping World Stadium on January 27, 2019 in Orlando, Florida. (Photo by Mark Brown/Getty Images)

Kansas City's Patrick Mahomes completed an 18-yard touchdown pass to Indianapolis' Eric Ebron, and the AFC beat the NFC 26-7 in steady rain in the Pro Bowl on Sunday. It was the third consecutive victory for the AFC in the NFL all-star game, all of them coming at Camping World Stadium.

The last two were played in sloppy weather, with the latest one also coming amid temperatures in the mid-50s.

It was far from ideal conditions, fairly fitting considering the effort players provided. It was two-hand touch most of the day, with officials blowing plays dead at the slightest hint of contact.

The AFC rallied in the rain last year, outscoring the NFC 21-3 after halftime to win 24-23.

The AFC led 20-0 early in the fourth quarter Sunday, looking like it might notch the first shutout in Pro Bowl history. But Dallas' Dak Prescott found Atlanta's Austin Hooper for a 20-yard score on fourth down with 9:09 remaining.

Mahomes completed 7 of 14 passes for 156 yards and was named the offensive Most Valuable Player. New York Jets safety Jamal Adams, who had an interception and a sack, was the defensive MVP. Each got a luxury vehicle.

The NFC had plenty of chances before that. The conference failed to score on a fourth-and-goal run early. Chicago's Mitchell Trubisky, Minnesota receiver Adam Thielen and Prescott threw interceptions.

Trubisky also was sacked by Adams on a flea flicker, and Dallas' Amari Cooper had a wide-open touchdown pass bounce off his face mask.

The AFC had several chances to put the game away, but Indy's Andrew Luck and Watson threw interceptions.

Indianapolis Colts tight end Eric Ebron had his phone tucked into the pocket of his sweatshirt and used it between the third and fourth quarters. Except Ebron didn't take pics with teammates. He got opposing players to pose with him, working his way around the entire NFC defense.

Several players used their phones on the sidelines, but Ebron was the first to pull his out on the field.

Jamal Adams, meanwhile, celebrated alone for a moment and then hugged the smiling official.

Players from both conferences spent the week lamenting a now-infamous no-call in the NFC title game.

New England and the Los Angeles Rams play in the Super Bowl next Sunday.