Man recalls gator attack that was caught by drone cam

THONOTOSASSA, Fla. - It is hard to say what is more incredible, that JC Defeats was bitten in the head by an alligator and survived, or that the brutal attack was caught on camera. Two weeks after, the Brandon man is out of the hospital but has a long road to recovery ahead of him.

On Aug. 3, JC was at Lake Thonotosassa shooting an instructional video for an upcoming event through his company, Defeat-X. His drone was recording when the attack happened.

"I always preach mitigated risk, and that day I failed, and it went completely out the window," JC explained.

The 34-year-old says he forgot his swim cap and goggles and did not do any of his usual safety precautions for swimming in a body of water.

PREVIOUS: Man rushed to the hospital after being bitten by gator on Lake Thonotosassa, officials say

The drone was filming from above as JC started swimming. In the footage, an estimated 12-foot-long alligator darts straight for him.

"I was chomped down on this side, like completely," he described.

The jaws of the gator came down on his head and upper torso.  The attack lasted only seconds, but JC tells us the entire time he knew he would make it out alive.

"An unbelievable amount of faith in myself that I wasn’t going to die," he recalled. "I was going to be OK, but I needed to act for sure." 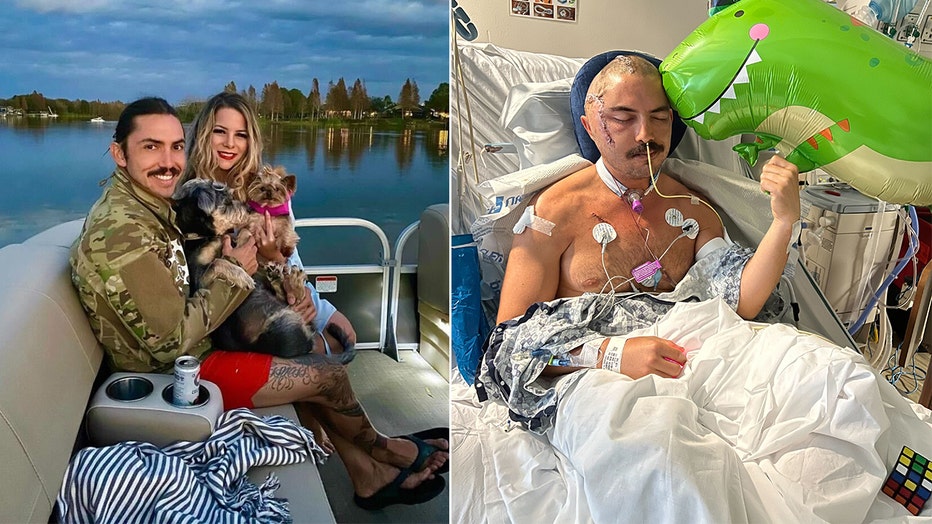 Photos show JC Defeats before and after the gator attack. (Provided by JC Defeats)

It could have been luck or instinct, maybe a higher intervention, but JC said he put his hands in the alligator’s mouth, feeling the teeth, struggling and rolling in the water.

He immediately started swimming for a nearby dock. Once out of the water, the adrenaline wore off and the intense pain hit. JC was also losing a lot of blood.

Neighbors called for help, and he was rushed to Tampa General Hospital as a trauma alert.

"We were just all there kinda huddled together, praying, and you know, we didn’t know what to expect,’ shared JC’s wife, Christine La Verde.  "What I saw in the ER was bad."

The U.S. Air Force pararescue veteran and Oldsmar firefighter underwent a six-hour surgery. The force of the alligator’s bite crushed his head, broke his jaw, and damaged a facial nerve.

"The bite crushed his skull, and it punctured his brain," Christine explained. "So, they ended up having to do a craniectomy, remove part of his temporal lobe."

A 911 call released by the Sarasota County Sheriff's Office is shedding light on how an elderly woman fell into a pond before she was attacked by two alligators.

READ: Golfer jumped into pond, tried to save woman being attacked by alligators: 911 calls

JC spent just 8 days in the hospital. He was discharged last week.

Christine calls him a walking miracle for how well he is doing after such extreme trauma.

"Overwhelmed and grateful and thankful that he was alive and well, and we could see that he was coherent and that neurologically everything was intact," she said.

JC is not out of the woods yet. There is still a risk of infection.

His jaw is wired shut for another few weeks, and he will have to go back for one last surgery to place a plate over his brain.

Still, JC wants people to know he is will survive, and is leaning on faith and family to carry him through. He's hopeful others can find a light in their lives as a reason to keep moving forward.

"I’m asking you to be tough because the world is a really difficult place, and, man, is it challenging to maneuver without God and ultimately Jesus Christ in your heart," said JC.

The family is grateful for all the prayers and support they have received. The North Pinellas Firefighters Charities is raising money online to help with JC’s ongoing medical expenses.

It is still not clear why the gator attacked, but state wildlife officials say this does not happen very often.

According to FWC, as of early August, a total of 18 alligator bite incidents have been reported to the agency. However, each of those must be thoroughly analyzed to determine if an alligator was actually involved, if it was provoked, or unprovoked.

In 2021, a total of 21 bite incidents were reported, however, only nine were determined to involve an alligator and were unprovoked.