WASHINGTON - The novel coronavirus death toll in the United States passed 90,000 on Monday, May 18, as the number of confirmed cases in the nation climbed past 1.5 million, according to the most recent data from the Johns Hopkins Coronavirus Resource Center.

The grim milestones came as states across the country start to reopen their economies, including Georgia, Michigan and Ohio, easing strict lockdown measures that shuttered businesses and forced companies to shrink their workforces.

While the data showed that more than 272,000 people have recovered from the virus, America still leads the world in confirmed cases and deaths by a significant margin. According to Johns Hopkins, the U.S. COVID-19 death count more than doubles that of the United Kingdom, the country with the second most-reported virus deaths at nearly 35,000.

Deaths caused by the novel coronavirus are believed to be undercounted in the U.S. and abroad, due in large part to limits in testing and the different ways countries count the dead.

In New York City, the death toll from the coronavirus may actually be thousands of fatalities worse than the tally kept by the city and state, according to a recent analysis released by the U.S. Centers for Disease Control and Prevention. The report found that an excess number of fatalities between March 11 and May 2 could have been COVID-19 deaths that went uncounted because a person died at home, or without medical providers realizing they were infected. 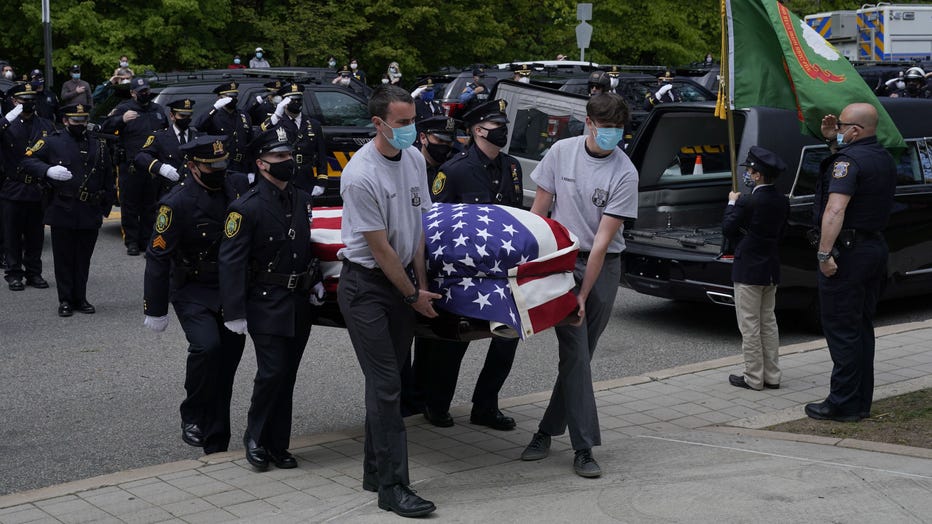 Pallbearers carry the casket of Glen Ridge Police Officer Charles Rob Roberts, 45, who died of coronavirus weeks after contracting the disease while on duty, during an outdoor ceremony on May 14, 2020 in Glen Ridge, New Jersey. (Photo by TIMOTHY A. C

In Europe, reported cases and deaths have slowed considerably. Countries started easing lockdowns a month ago and even the harshest shutdowns, such as those in Italy and Spain, have loosened significantly. On Monday, nations began reopening more widely — granting people access to the Acropolis in Greece, shops in Italy, markets and museums in Belgium, golf courses in Ireland and beer gardens in Bavaria.

As the world carved out a new normal amid the pandemic, China announced it will give $2 billion to fight against the coronavirus. Chinese President Xi Jinping told the World Health Organization’s annual meeting that the money will be paid out over two years to help respond to COVID-19, which first surfaced in Wuhan, a city in China's Hubei Province.

Watch as the world pays tribute to health care workers

From New York to Paris, people across the world are showing their appreciation to health care workers.

The announcement came amid sharp tensions between Beijing and President Donald Trump, who has suspended U.S. funding to WHO and accused it of failing to stop the virus from spreading.

RELATED: Trump on China: 'We could cut off the whole relationship’

Scientists, meanwhile, are racing to develop a coronavirus vaccine.

Drugmaker Moderna said Monday that it found promising results in the first phase of its COVID-19 vaccine trial, based on results from the first eight people who each received two doses of the vaccine and developed neutralizing antibodies similar to the ones developed by people who’ve recovered from the virus.

Later phases will test a larger number of patients.