ORLANDO, Fla. - Tropical Storm Victor has formed in the Atlantic and the FOX 35 Storm Team is breaking down all the tropical activity being monitored. 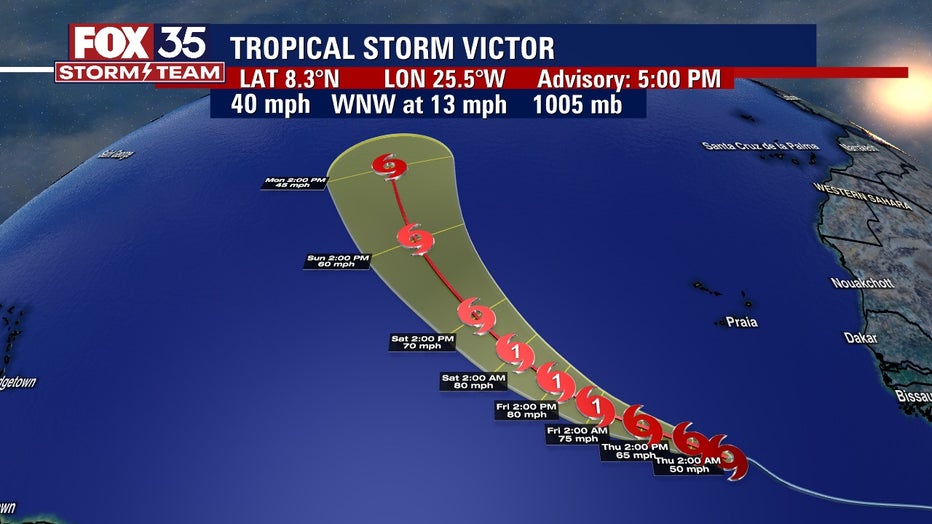 Tropical Depression 20 has formed in the Atlantic on Wednesday and by the 5 p.m. advisory, the system strengthened into Tropical Storm Victor.

The National Hurricane Center (NHC) said that it is expected to become a hurricane in a day or two. It is currently located hundreds of miles south of the Cabo Verde Islands.

They explained that Victor is moving west-northwest at 13 mph and this motion is expected to continue over the next couple of days, followed by a turn to the northwest.

But don't worry: FOX 35 Storm Team Chief Meteorologist Jayme King said that there is no threat to land on the forecast track. 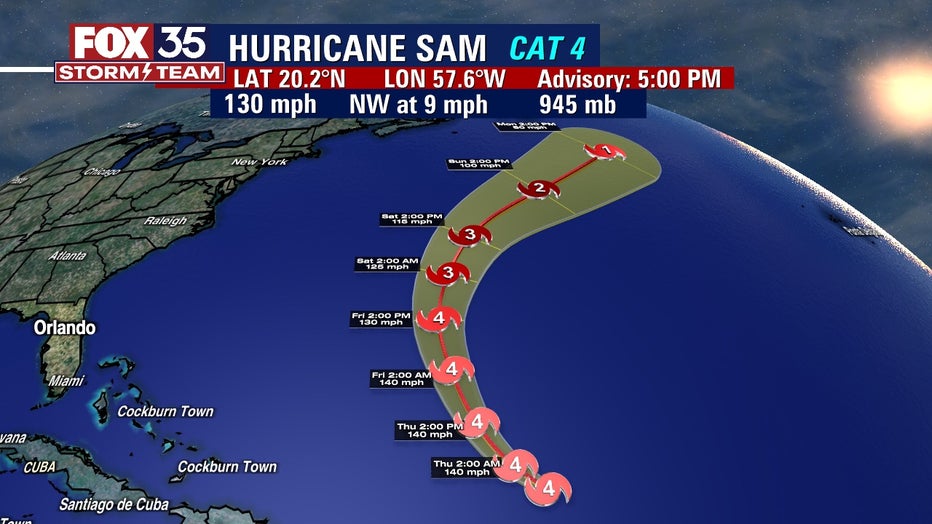 As for Hurricane Sam, the system is maintaining Category 4 strength on Wednesday as it moves across the Atlantic.

"A turn toward the north is forecast by Friday," the NHC said. "On the forecast track, Sam will continue to pass well to the east-northeast of the northern Leeward Islands through tonight."

Air Force Hurricane Hunters say Sam remains a Category 4 hurricane with some fluctuations in intensity expected during the next couple of days. Sam is forecast to remain a major hurricane through late this week. While the system is a ‘menace at sea,’ the hurricane is not expected to make U.S. landfall.

ELSEWHERE IN THE TROPICS

Forecasters said that disorganized showers and thunderstorms in association with a trough of low pressure have been located several hundred miles southwest of the Cabo Verde Islands. Some slow development is possible over the next couple of days. Formation chances are at 30 percent.

They also said that there is an area of low pressure associated with the remnants of Peter located hundreds of miles south of Newfoundland. It is producing disorganized showers and thunderstorms while moving northeastward over cooler waters and into a region of strong upper-level winds. Significant development is not anticipated. Formation chances are at 10 percent.

The next two named storms will be ‘Victor’ and ‘Wanda,’ finishing off the list of 2021 Atlantic tropical system names. At this point, forecasters will need to use the alternate list of names. In the past, the Greek alphabet was used but this was changed this year.