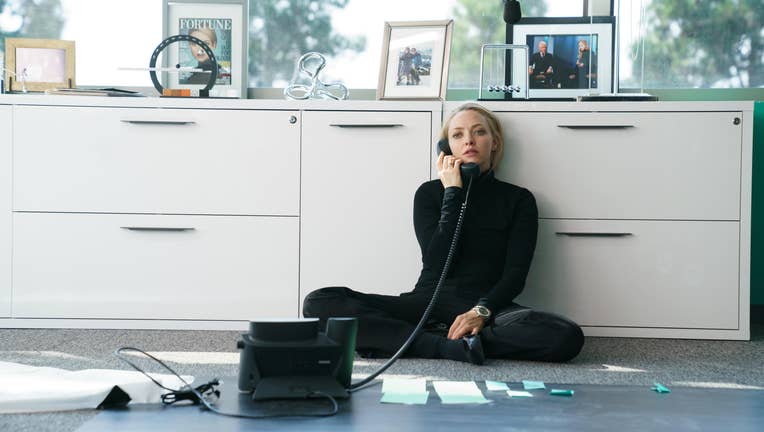 SAN JOSE, Calif. - Evan Sernoffsky is an investigative reporter for KTVU who covered the four-month-long Elizabeth Holmes fraud trial from gavel-to-gavel. Email Evan at evan.sernoffsky@foxtv.com and follow him on Twitter @EvanSernoffsky.

There’s apparently still plenty of meat on that bone – especially as Theranos-heads (you know who you are) await Holmes’ sentencing in September after she was found guilty earlier this year of three counts of fraud and one count of conspiracy.

And as viewers watch, they may wonder whether the series is spot-on accurate, made-up or embellished, or all of the above? Obviously, this article contains spoilers. For the rest of you, here’s what we know:

Who is Holmes talking to at the beginning? 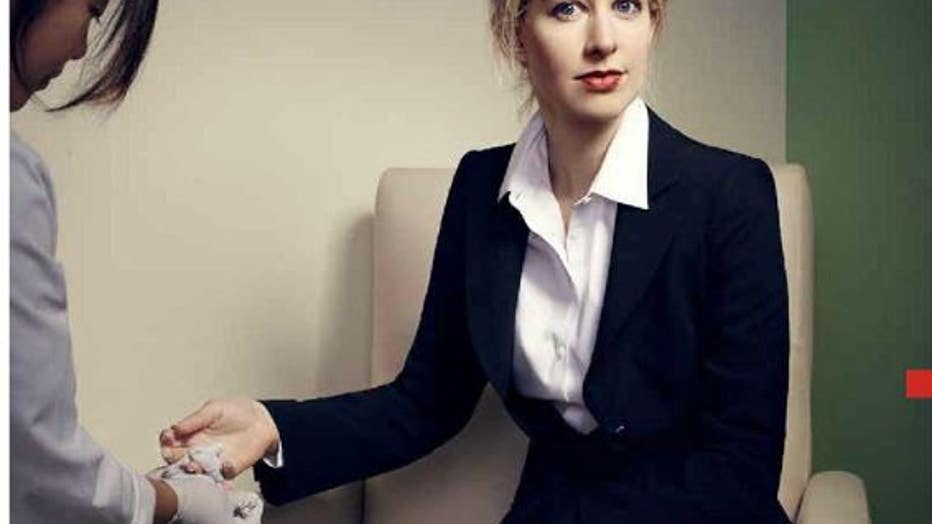 The series is driven by a clever narrative device of Holmes’ answering questions to catch viewers up on some key points of the story (youngest self-made female billionaire CEO and all that). One recurring segment adeptly mimics her 2017 civil deposition with the Securities and Exchange Commission. But instead of the famous tape of Holmes, we see Seyfried dressed in the same light blue collared shirt and blazer combo, narrating her own story. Holmes in real life settled the SEC civil suit for $500,000 in 2018 and can’t serve as the head of a public company for a decade.

In the opening scene of "The Dropout," we also see Holmes being interviewed by a journalist, just like her real-life strategy to promote herself and her company in the press. It ended up coming back to bite her. Note the Fortune magazine cover that was instrumental in her criminal trial. It’s author, Roger Parloff, was one of the most damning witnesses for the prosecution and his recordings of her lying in interviews were played in open court.

Did Holmes’s dad really lose his job when Enron collapsed? 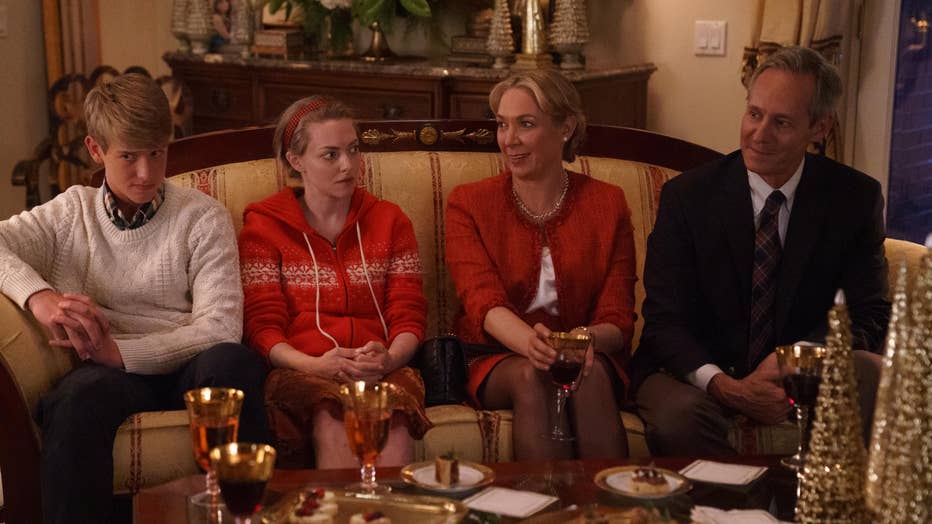 Yes. Holmes’ father, Christian Holmes IV, was a vice-president at Enron and like everyone else at the company, lost his job when its corporate fraud was exposed. Holmes was raised in Houston (Enron’s headquarters), where she had an awkward and academically ambitious childhood that led to getting into Stanford. Holmes’s father is depicted as kind and caring in the series, while her mother is portrayed as somewhat callous. We may never know how close to the truth her family dynamic really was.

Neither parent spoke during the trial, but Holmes’ mother, Noel, was by her side every day and held her hand as they walked through the gauntlet of reporters and television cameras into court. Her father was excluded from the courtroom because he was added to the defense’s witness list. But he was present for the verdict, and was seen in the hallway doubled over with emotion shortly after hearing the jury's decision. 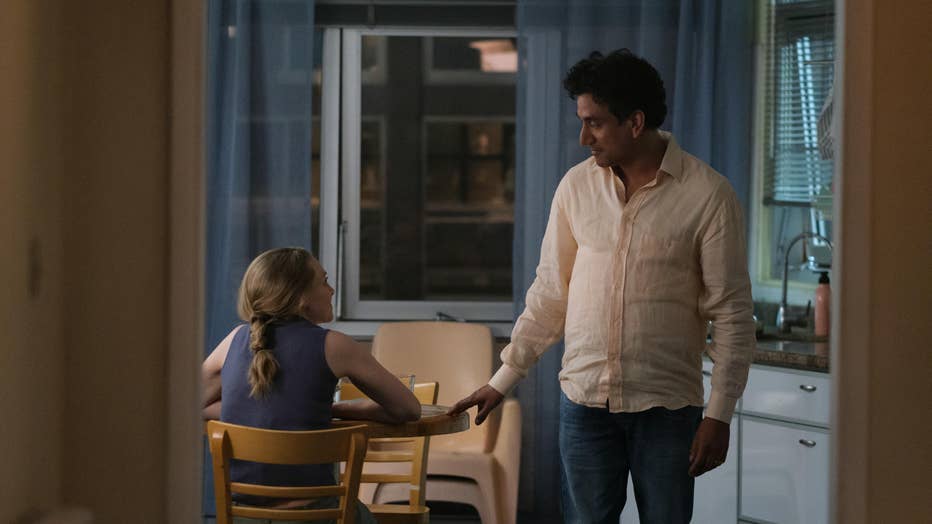 We first meet Balwani on screen inside a dorm room where Holmes was part of study abroad program at Beijing University in 2002. She was 18 and he was 37. (That's actually true.) Holmes has yet to come up with the idea for Theranos, and in the series, Holmes and Balwani grow close before their relationship becomes romantic back in California.

You may recognize Balwani is played by a buttoned up Naveen Andrews, who may be unrecognizable to LOST fans that knew him as the tough and rugged castaway Sayid in the early 2000s.

In one memorable scene, Balwani describes his father’s death from a heart attack, saying the doctors missed the diagnosis. It's a bit of a stretch in the story in order to create a seed for what will become Holmes’ blood-testing invention. But even though there’s a lot of dramatic license here, Balwani’s attorneys have said that his father did not get a proper diagnosis in real life, potentially inspiring his drive to see Theranos succeed. 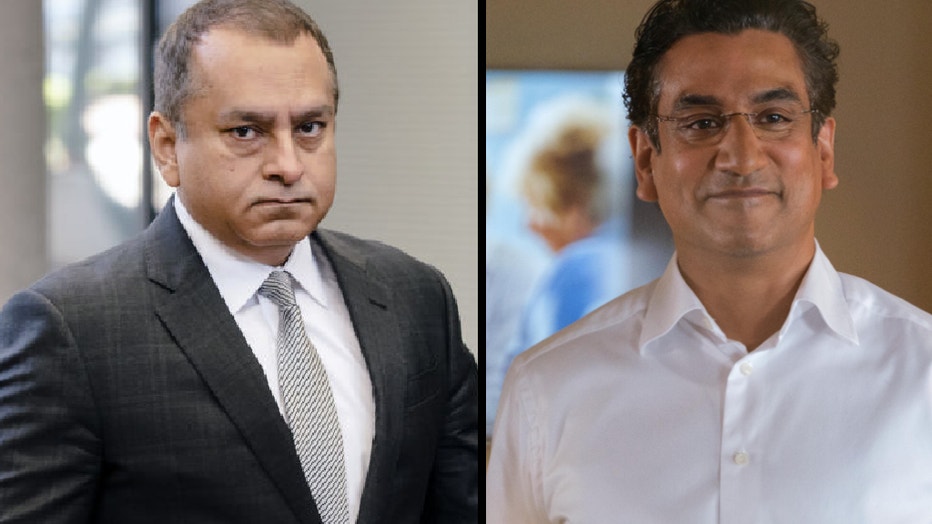 The real Sunny Balwani enters court in San Jose on Wednesday, Oct. 2, 2019. He is played by Naveen Andrews in The Dropout. (photo courtesy of Hulu)

Later when Holmes is back at Stanford, the series tackles one of the most troubling events in Holmes’ young life – her claims that she was sexually assaulted. Holmes testified that she was raped while a student at the school. It all drove her closer to Balwani, whom she felt would protect her. In federal court years later, she went on to testify that Balwani became abusive himself, controlling almost every aspect of her life.

So far, the show does not depict Balwani as abuse and overbearing, but instead as her supportive business partner and complicated love interest. Balwani's attorneys categorically deny Holmes' abuse claims.

Was Holmes’s first idea for Theranos a blood-testing patch? 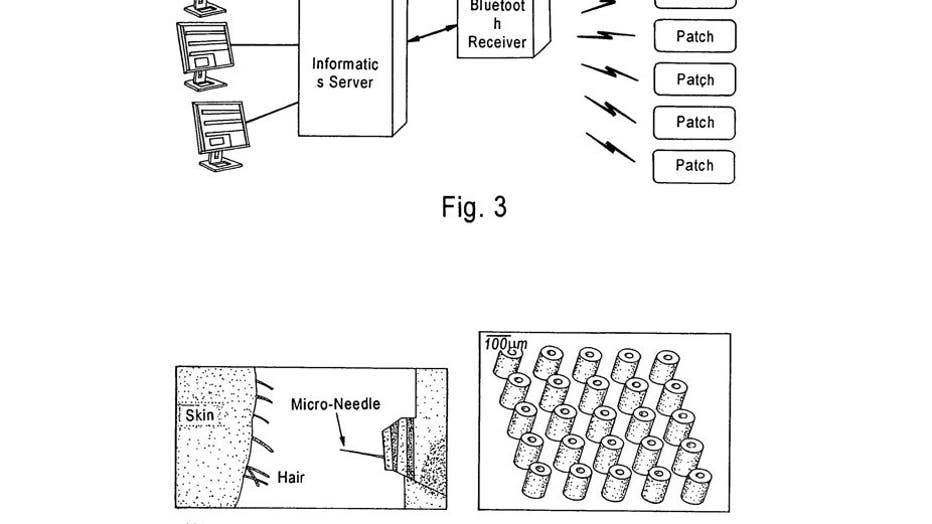 One of the pages from Theranos's first patent for an "ingestible, implantable or wearable medical device."

In her first day of testimony in her criminal fraud trial, Holmes described the idea for Theranos and why she chose to drop out of Stanford and form her own company. She always knew she wanted to be an inventor and idolized Apple founder Steve Jobs. (Hence the black turtlenecks.) And yes, the first idea for her company was indeed a pill and then a patch. Holmes talked about patenting the idea of a miniature device that could diagnose and deliver medicine in real-time.

She later befriended mentor and Stanford professor of chemical engineering, Channing Rex Robertson (played by Bill Irwin, who you may recognize from HBO's The Gilded Age or as Mr. Noodle on Sesame Street's Elmo's World, depending on what kind of crowd you roll with).

Anyways, Robertson supported Holmes’ decision to start her own company and served on her early board of directors.

Holmes eventually abandoned the idea of the patch and developed the prototype for her first analyzer using cartridges to test small finger pricks of blood. The image of the first real prototype was shown in court during Holmes' testimony. Viewers might not recognize the device on screen, because creators of The Dropout slightly changed its look. 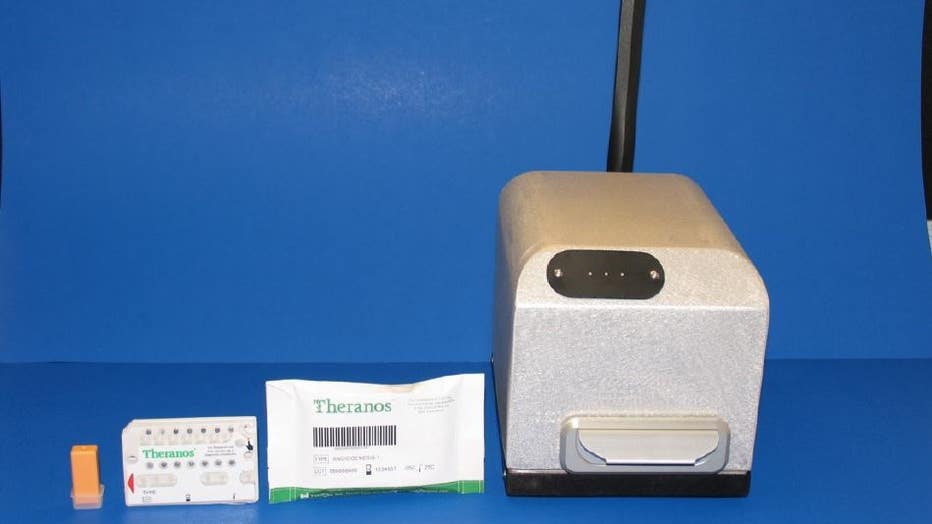 The first Theranos blood analyzer as show in court records.

Episode 1 ends with a dramatic flair that nobody but the former lovers could ever corroborate: Holmes at her new company headquarters in East Palo Alto, where a stray bullet has just whizzed by her head. She calls Balwani, and he vows to stay by her side, as they embrace. "You can't push me away again. I'm going to protect you."

Coming soon… Episode 2 of "The Dropout"…. How much of it is real?