During Takanakuy, people fight one-on-one to settle the year's disputes on Christmas day

The people of the Chumbivilcas region hold a festival called Takanakuy each year, during which people settle their grievances and disputes in physical fights.

SANTO TOMAS, Peru - Before heading into a new year, the people who inhabit the highest peaks in Peru’s Andes Mountains make sure there are no lingering grievances holding them back by fighting each other in public on Christmas morning as part of a festival called Takanakuy.

The Peruvian province of Chumbivilcas in the well-known Cuzco region hosts the festival each year at about 12,000 feet above sea level, and entire towns gather to celebrate and watch people settle their differences. 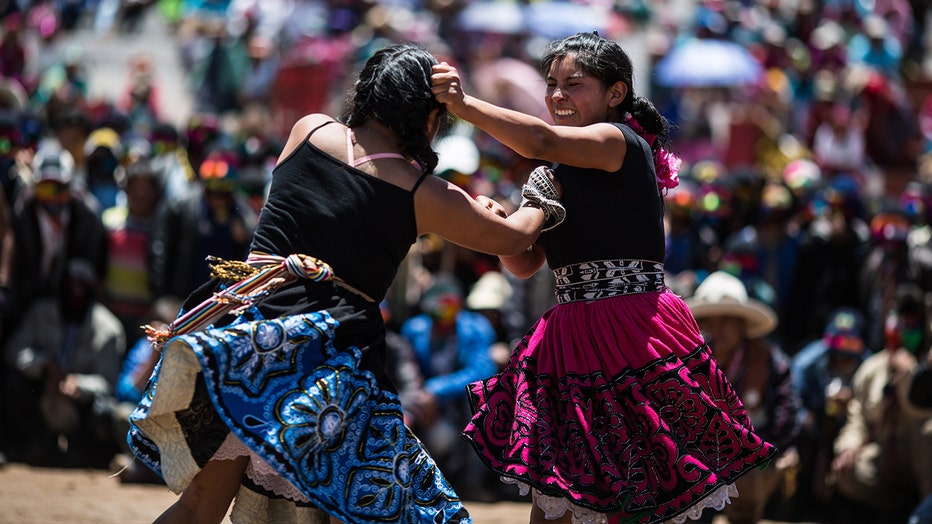 Two women fight during Takanakuy celebrations in the region of Chumbivilcas, Cuzco in the Andes of southern Peru on December 25, 2014. The Takanakuy is a traditional celebration held every December 25. The word "Takanakuy" means "to strike with the f (Sebastian Castaneda/Anadolu Agency/Getty Images)

While it might sound brutal to start your Christmas morning by getting into physical fights with loved ones, friends, business partners, acquaintances or whomever else you might have developed conflict with over the course of a year, Takanakuy is less a form of retribution and more about conflict resolution, strengthening community bonds and the release of aggression.

The value of literally battling out your differences makes a lot more sense when you consider the terrain of Peru’s Andes Mountains — many villages are built into the mountains well above the point where altitude sickness starts to kick in (8,000 feet) and where food is incredibly limited — living in such a place requires a hardiness and tenacity in just about every aspect of life, especially when you’re a farmer. 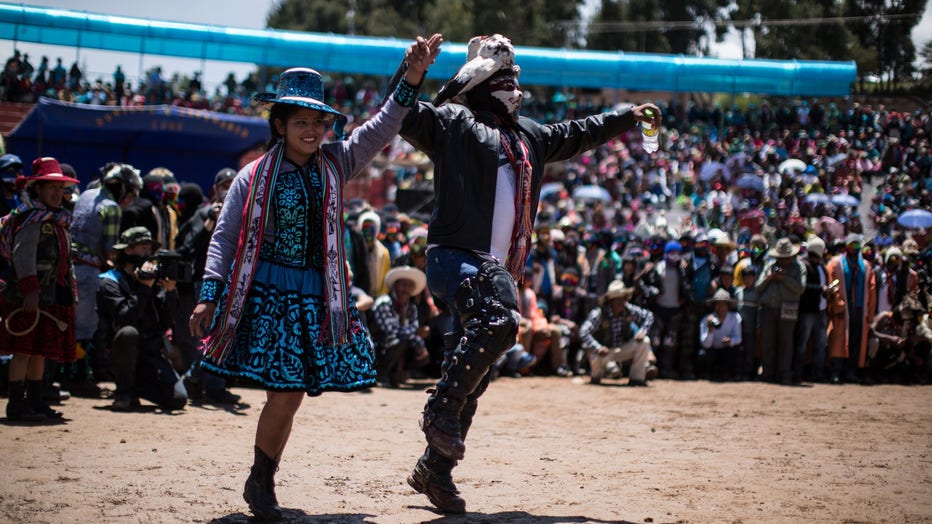 A man wears colorful mask and holds a winner’s hand up during Takanakuy celebrations in the region of Chumbivilcas, Cuzco in the Andes of southern Peru on Dec. 25, 2014. (Sebastian Castaneda/Anadolu Agency/Getty Images)

Instead of living side-by-side with someone for whom you harbor negative feelings, many of the people who inhabit Peru’s mountains believe it’s best to air your grievances and get everything out in the open.

Because the ultimate goal is peace and conflict resolution, each fight of the Takanakuy festival begins and ends with either a hug or a handshake.

Takanakuy translates to “to hit each other” or “to strike with fist” in Quechua, the region’s primary language, and while all conflicts are resolved the same way, the disputes spring from many sources. Because the region is home to many farming communities, there are often disputes over land, harvesting or stealing animals; but there are also arguments over love and friendship. 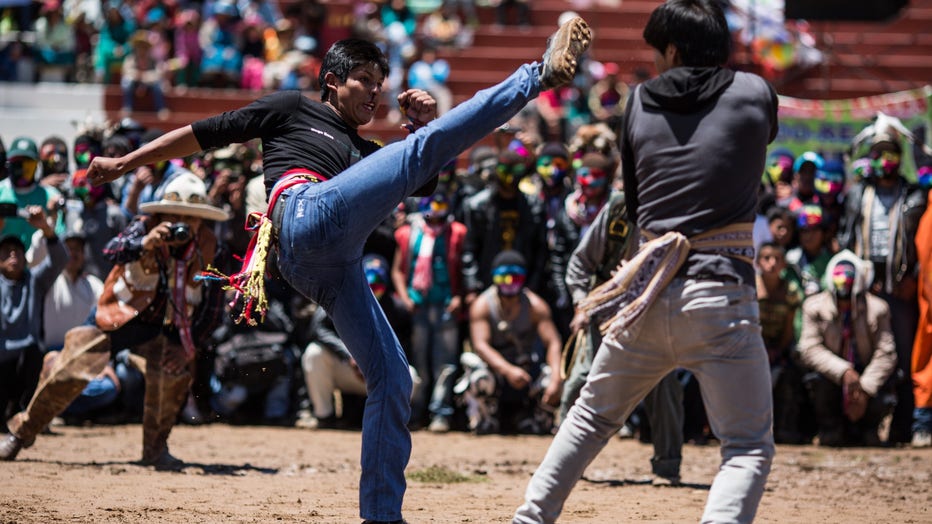 Two men fight during Takanakuy celebrations in the region of Chumbivilcas, Cuzco in the Andes of southern Peru on Dec. 25, 2014. (Sebastian Castaneda/Anadolu Agency/Getty Images)

All are welcome to fight, from young children to the elderly, and both men and women are involved in the matches.

Each match typically lasts for only a minute or less.

The fights are much more similar to martial arts sparring than street fighting, and each match is fully organized and overseen by a set of referees. If someone breaks one of the rules (no biting, no hitting someone when he or she is down) the referees are ready to intervene. So are the massive crowds that gather to watch each fight — the entire community is invested in preserving the intent and spirit of Takanakuy. 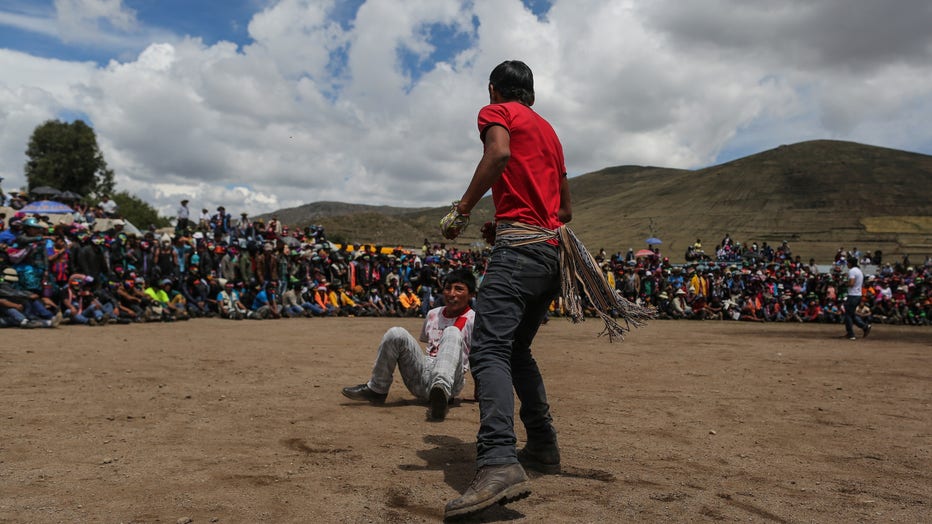 Two men fight during Takanakuy celebrations in the region of Chumbivilcas, Cuzco in the Andes of southern Peru on Dec. 25, 2014 (Sebastian Castaneda/Anadolu Agency/Getty Images)

All of this might sound strikingly similar to Festivus, the fictional secular holiday intended as an alternative to the commercialism and pressure of the holiday season in the U.S., which was introduced and made popular by a 1997 episode of Seinfeld. The holiday was originally conceived by show writer Dan O’Keefe’s father, Daniel O’Keefe.

Festivus involves practices such as the “Airing of Grievances,” in which each person tells all the others how they have disappointed them over the year, as well as the “Feats of Strength,” which involves those present attempting to wrestle the head of household to the ground.

But the Festivus celebration portrayed in Seinfeld is rife with petty conflict and ultimately bolsters the strained relationships between family members, whereas Takanakuy is truly about community and solidarity.

The fighting at Takanakuy is only one aspect of the festival, which also involves music, dancing and elaborate costumes. 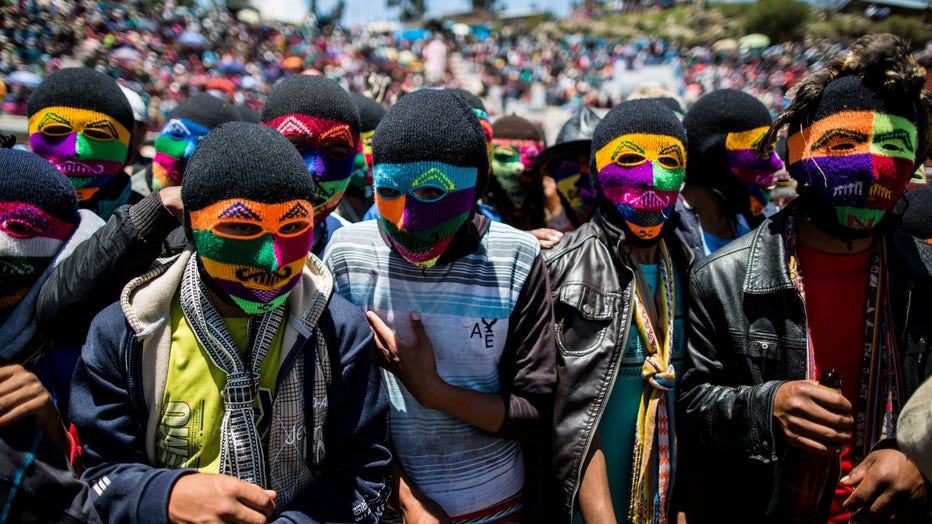 Men, wear colorful mask pose during Takanakuy celebrations in the region of Chumbivilcas, Cuzco in the Andes of southern Peru on Dec. 25, 2014. (Sebastian Castañeda/Anadolu Agency/Getty Images)

Huaylia is the preferred music of the indigenous people of the Chumbivilcas region, and it is a prominent feature of the festival. Huaylia’s lyrics highlight the Chumbivilcas’ ideals of freedom and independence, two concepts inherent in the spirit of Takanakuy.

"The average villager in this region has basically no access to lawyers or courts, and even if they travel to a place where they do, odds are the ultimate judgment will not be in their favor. Using violence as a means of solving disputes may seem barbaric to people in the cities, but as you can see, the fighting here is all carefully controlled and the people involved get an immediate and cathartic result," a legal student from Lima, Peru, told CNN at the 2011 Takanakuy.

No matter how many people end the festival with bruised and bloody faces, the community is more unified and peaceful because of it.