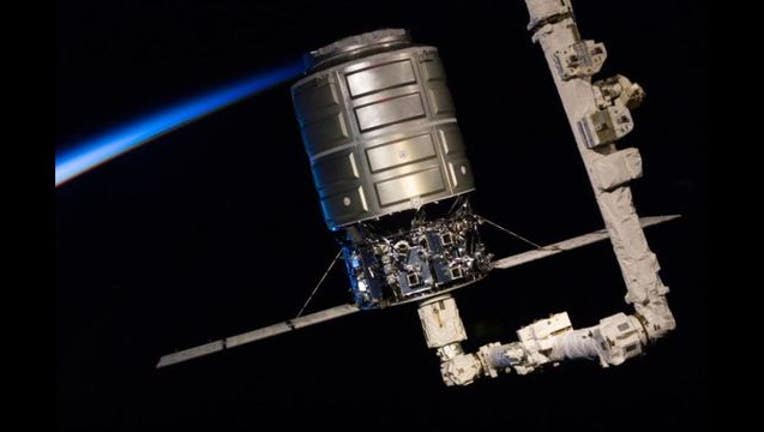 CAPE CANAVERAL, Fla. (AP) — The International Space Station received its first shipment from Virginia in more than two years Sunday following a sensational nighttime launch observed 250 miles up and down the East Coast.

"What a beautiful vehicle," said Japanese astronaut Takuya Onishi, who used the station's big robot arm to grab the vessel. The capture occurred as the spacecraft soared 250 miles above Kyrgyzstan; Onishi likened it to the last 195 meters of a marathon.

Last Monday's liftoff from Wallops Island was the first by an Antares rocket since a 2014 launch explosion. Orbital ATK redesigned its Antares rocket and rebuilt the pad. While the Antares was grounded, Virginia-based Orbital ATK kept the NASA supply chain open with deliveries from Cape Canaveral, Florida, using another company's rocket.

NASA is paying Orbital ATK and SpaceX to stock the station, but now SpaceX is grounded. The California company is investigating why one of its Falcon rockets exploded in a massive fireball during launch pad testing on Sept. 1.

Following liftoff, Orbital ATK's Cygnus capsule orbited solo for twice the usual amount of time. NASA wanted the Cygnus — named after the swan constellation — to wait for three astronauts to launch from Kazakhstan. They arrived Friday, doubling the size of the crew. Besides Onishi, the crew includes two Americans and three Russians.

Helping Onishi with the Cygnus on Sunday morning was NASA astronaut Kate Rubins. Their four-month mission will end next weekend.

This particular Cygnus, meanwhile, is officially known as the S.S. Alan Poindexter. Orbital ATK named it after a former space shuttle commander who helped to build the station. He was killed in a jet ski accident in 2012.

Once the Cygnus is unloaded, it will be filled with trash and set loose to burn up in the atmosphere in mid-November.