'This is how I'm going to die', Capitol officer recalls being attacked during riot | LiveNOW from FOX

Sergeant Aquilino Gonell shares chilling testimony on what he experienced during the capitol riots. Gonell said he could feel himself loosing oxygen when being attacked by rioters as he tried to defend the entrance. After being attacked, Gonell said he gave CPR to a rioter in efforts to save her life.

WASHINGTON - Four police officers who defended the U.S. Capitol as a mob of then-President Donald Trump’s supporters stormed the building gave emotional accounts before a House panel investigating the insurrection of what they endured during the deadly Jan. 6 attack.

The officers were punched, trampled, crushed and sprayed with chemical irritants as the mob overwhelmed them, broke through windows and doors and interrupted the certification of Joe Biden’s presidential win.

"This is how I'm going to die, defending this entrance," Capitol Police Officer Aquilino Gonell recalled thinking during his testimony on Tuesday.

Gonnell, an Iraq veteran, wiped away tears as he described hearing other officers screaming in agony and pain just a few feet away from him.

"On January 6, for the first time, I was more afraid to work at the U.S. Capitol than during my entire deployment in Iraq," Gonnell testified. "We are not asking for medals or recognition, we simply want justice and accountability."

Gonnell added that "for most people, January 6 happened for a few hours, but for those of us who were in the thick of it, it has not ended."

Gonell, along with Capitol Police officer Harry Dunn and Metropolitan Police officers Michael Fanone and Daniel Hodges testified about the violence and injuries they received, asking for "justice and accountability." 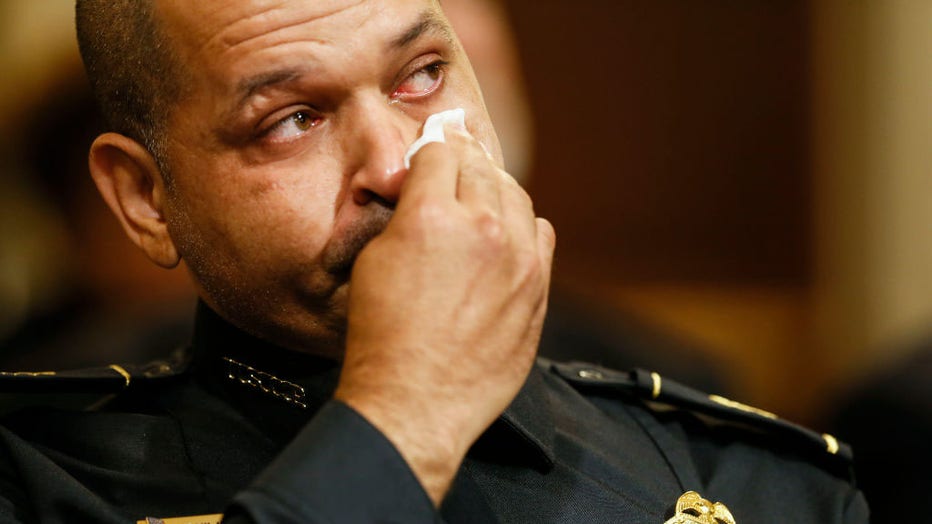 U.S. Capitol Police sergeant Aquilino Gonell is seated to testify for the opening hearing of the U.S. House (Select) Committee investigating the January 6 attack on the U.S. Capitol, on July 27, 2021, at the U.S. Capitol in Washington, D.C. During it

Fanone described being beaten by rioters who shocked him with a stun gun, "all while being called a traitor to my country." Doctors later told him he'd had a heart attack.

"I was at risk of being stripped of, and killed with, my own firearm as I heard chants of 'kill him with his own gun," Fanone testified. "I can still hear those words today."

Rebuking Republican lawmakers who have resisted the hearings, Fanone said, "I feel like I went to hell and back to protect them and the people in this room."

Hodges said he remembered foaming at the mouth and screaming for help as rioters crushed him between two doors and bashed him in the head with his own weapon, injuring his skull. His bloody face and anguished screams were caught on video. He testified about "terrorists" attempting to gouge out his eye, with one saying: "You will die on your knees."

"To my perpetual confusion, I saw the thin blue line flag, a symbol of support for law enforcement, more than once, carried by the terrorists as they ignored our commands and continued to assault us," Hodges told the panel.

Dunn said one group of rioters, perhaps 20 people, screamed the n-word at him as he was trying to keep them from breaching the House chamber. He described how the attackers fought him in what resembled hand-to-hand combat as he held them back.

"Until then I had never seen anyone physically assault Capitol police or MPD, let alone witness mass assaults being perpetrated on law enforcement officers," Dunn testified. "I witnessed the rioters using all kinds of weapons against officers, including flag poles, metal bike racks that they had torn apart, and various kinds of projectiles."

Metropolitan Police Officer Michael Fanone, who helped to defend the Capitol from a mob of then-President Donald Trump supporters, described being beaten by rioters who shocked him with a stun gun in testimony on July 27, 2021.

Seven people died during and after the rioting, including a woman who was shot by police as she tried to break into the House chamber and three other Trump supporters who suffered medical emergencies.

Two police officers died by suicide in the days that followed, and a third officer, Capitol Police Officer Brian Sicknick, collapsed and later died after engaging with the protesters. A medical examiner determined he died of natural causes.

The panel’s chairman, Mississippi Rep. Bennie Thompson, played video of the attack after the hearing opened and told the police officers: "History will remember your name." He said the rioters "came ready for a fight, and they were close to succeeding."

Thompson added: "There’s no place for politics and partisanship in this investigation."

The probe aims to examine Trump’s role in the insurrection, who told his supporters to "fight like hell" to overturn his defeat, as well as the right-wing groups involved in coordination before the attack.

It will also look at the security failures that allowed hundreds of people to breach the Capitol and send lawmakers running for their lives. Some of those who broke in were calling for the deaths of House Speaker Nancy Pelosi and then-Vice President Mike Pence, who was hiding just feet away from the mob.

The panel’s first hearing comes as partisan tensions have only worsened since the insurrection, with many Republicans playing down the violence that occurred and denouncing the Democratic-led investigation as politically motivated. Democrats now want to launch the probe — and win public support for it — by reminding people how brutal it was, and how the law enforcement officers who were sworn to protect the Capitol suffered grave injuries at the hands of the rioters.

The committee was formed after Senate Republicans in May blocked a House-passed bill to create an independent panel to study the deadly riot, modeled after the commission that investigated the Sept. 11, 2001, terror attacks. Though the bill passed the House with the support of almost three dozen Republicans, GOP senators said they believed the commission would eventually be used against them politically.

The House voted to create its own investigation instead, and Pelosi named its committee’s members — which includes Republican Representatives Liz Cheney and Adam Kinzinger. Cheney also gave opening remarks on Tuesday after Thompson, an effort by Democrats to appear as bipartisan as possible.

The House Republican leader, Kevin McCarthy, withdrew the participation of other Republicans last week after Pelosi rejected two of them, saying their "antics" in support of Trump, and his lies that he won the election, weren’t appropriate for the serious investigation. On Monday evening, the House voted against a resolution offered by the GOP leader to force the members to sit on the panel.

McCarthy has stayed close to Trump since the insurrection and has threatened to pull committee assignments from any Republican who participates on the Jan. 6 panel. On Monday, he called Cheney and Kinzinger "Pelosi Republicans," an effort that Cheney immediately called "childish."

"We have important work to do," Cheney said Monday as the committee met to prepare.

Outside the same meeting, Kinzinger said that "for too long, we’ve been pretending that Jan. 6 didn’t happen." He said he never expected to be in this position, "but when you have these conspiracies that continue to thrive, when you have lies and misinformation that continue to thrive, it’s essential for us as members of Congress to get to the answers."

Shortly after the insurrection, almost every Republican denounced the violent mob. But many have softened their tone in recent months and weeks.

And some have gone farther, with Georgia Rep. Andrew Clyde saying a video of the rioters looked like "a normal tourist visit" and Arizona Rep. Paul Gosar repeatedly saying that a woman who was shot and killed by police as she was trying to break into the House chamber was "executed." Others have falsely claimed that Democrats or liberal groups were responsible for the attack.