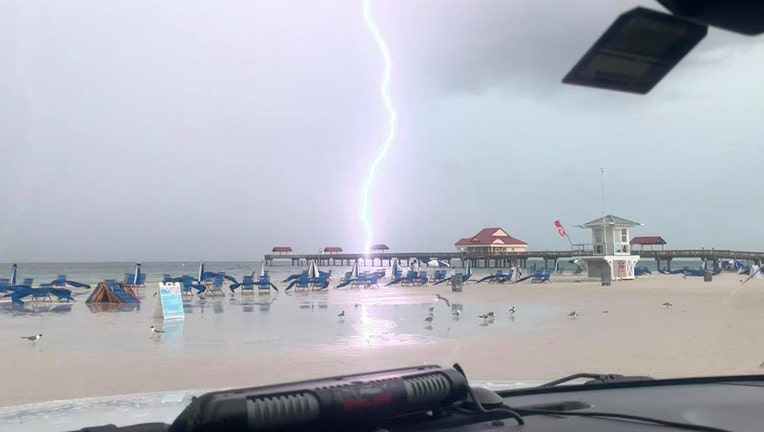 CLEARWATER, Fla. - "The beach is no place to be when lightning is near," police in Clearwater are warning.

The Clearwater Police Department posted shocking photos of lightning striking the beach. It was taken from the inside of a police vehicle safely. However, they said that an officer had to tell multiple people there that they should not be on the beach for their own safety.

Florida has long been known as the lightning capital of the United States. Data though shows that the state's title was recently taken by Oklahoma. Meteorologists at the Finland-based environmental monitoring company Vaisala found that Oklahoma had narrowly surpassed Florida for the most lightning flashes per square kilometer from 2016 to 2020.

In addition, AccuWeather says that there are some "nuances" in the types of lightning strikes that factored into Vaisala's conclusions, including both cloud-to-ground lightning and in-cloud lightning.

"This means that ultimately, Orlando is the lightning capital of the United States," the outlet said.

Florida is known for summer thunderstorms fueled by sea-breeze collision, while Oklahoma sees supercell storms and mesoscale convective systems common in the Plains.

According to Vaisala's data, only one other state -- Louisiana -- saw more than 60 such events. The state reportedly averages 71.9 events per square kilometer per year.

According to National Geographic, around 100 cloud-to-ground lightning bolts strike Earth's surface every second